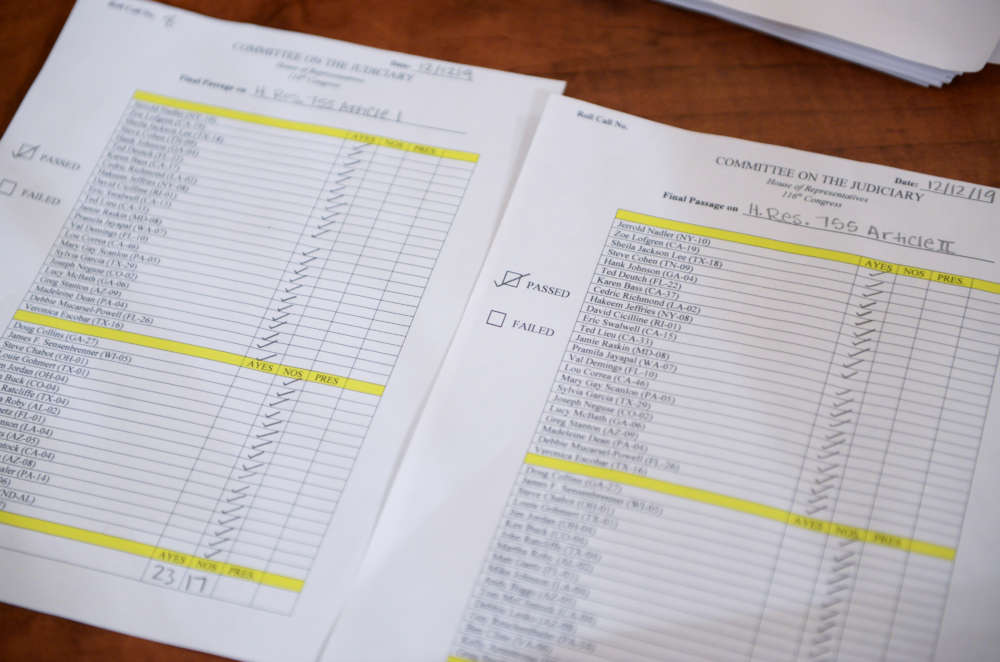 A Democratic-controlled House of Representatives committee on Friday took Republican President Donald Trump to the brink of impeachment when it approved two charges against him stemming from his efforts to pressure Ukraine to investigate Democratic political rival Joe Biden.

A deeply divided House Judiciary Committee voted 23-17 to approve articles of impeachment charging Trump with both abusing the power of his office over Ukraine and obstructing House Democrats’ attempts to investigate him for it.

If the full House votes next week to impeach Trump, as expected, the Republican will become the third U.S. president to be impeached. But the chances of him being removed from office are close to zero because the Senate, which is dominated by Republicans, will have the final say.

In congressional hearings that have gripped Washington, Democrats have accused the president of endangering the U.S. Constitution, jeopardizing national security and undermining the integrity of the 2020 election by asking Ukrainian President Volodymyr Zelenskiy in a July phone call to investigate Biden.

“Today is a solemn and sad day,” the committee’s Democratic chairman, Jerry Nadler, said. “For the third time in a little over a century and a half, the House Judiciary Committee has voted articles of impeachment against the president.”

Republicans have defended Trump and accused Democrats of a politically motivated farce aimed at overturning his surprise 2016 presidential election victory.

“A sad, ridiculous sham in the U.S. House of Representatives. This needs to come to a quick end,” Senate Judiciary Committee Chairman Lindsey Graham, a Republican who is often a staunch defender of Trump, wrote on Twitter.

If impeached, Trump will go on trial in the Senate early next year, just as the 2020 presidential campaign begins to pick up speed.

Biden, a former U.S. vice president, is a leading Democratic candidate to face Trump in November’s general election. Trump has alleged that Biden was involved in corruption in Ukraine and should be investigated but the president has offered no evidence. The Democrat denies any wrongdoing.

The abuse of power charge against Trump also accuses him of freezing nearly $400 million in U.S. security aid to Ukraine and offering a possible White House meeting to Zelenskiy to get him to publicly announce investigations of Biden and his son Hunter, who was on the board of a Ukrainian gas company.

Trump also asked Ukraine to investigate a debunked theory that Ukraine, not Russia, interfered in the 2016 U.S. election.

The obstruction charge against Trump is based on his directives to current and former administration officials such as Secretary of State Mike Pompeo not to cooperate with the impeachment inquiry, even if that meant defying subpoenas.

A senior Democratic aide said the House tentatively plans to hold an impeachment debate next Wednesday ahead of a vote on whether to impeach Trump and send him for trial.

Trump and Republicans say the president did nothing improper in his call with Zelenskiy, and that there is no direct evidence he withheld aid or a White House meeting in exchange for a favor. Democrats counter that by saying that Trump stopped top aides from testifying.

Signaling investors’ lack of concern at political upheaval, U.S. stocks hit fresh record levels on Friday on optimism over a possible trade deal between China and the United States.

As the committee was voting, China announced progress and said Beijing would cancel tariffs scheduled to take effect, pushing the Dow Jones Industrial Average up 0.38%. Trump followed up by tweeting a that trade deal had been reached. Shares later gave up some of the gains but remained near record levels.

Republican President Richard Nixon resigned in 1974 before he was impeached over his involvement in the Watergate scandal.

Trump is running for re-election in 2020, a contest expected to be a bitter, partisan battle with a Democratic nominee who will be chosen next year.

The impeachment inquiry was launched in September after a whistleblower complaint about the July 25 call between Trump and Ukraine’s Zelenskiy.

By In Cyprus
Previous articleJustice Minister wants more police out on streets to deal with traffic offences
Next articleWeather forecast: More rain and thunderstorms, possible snow on Saturday