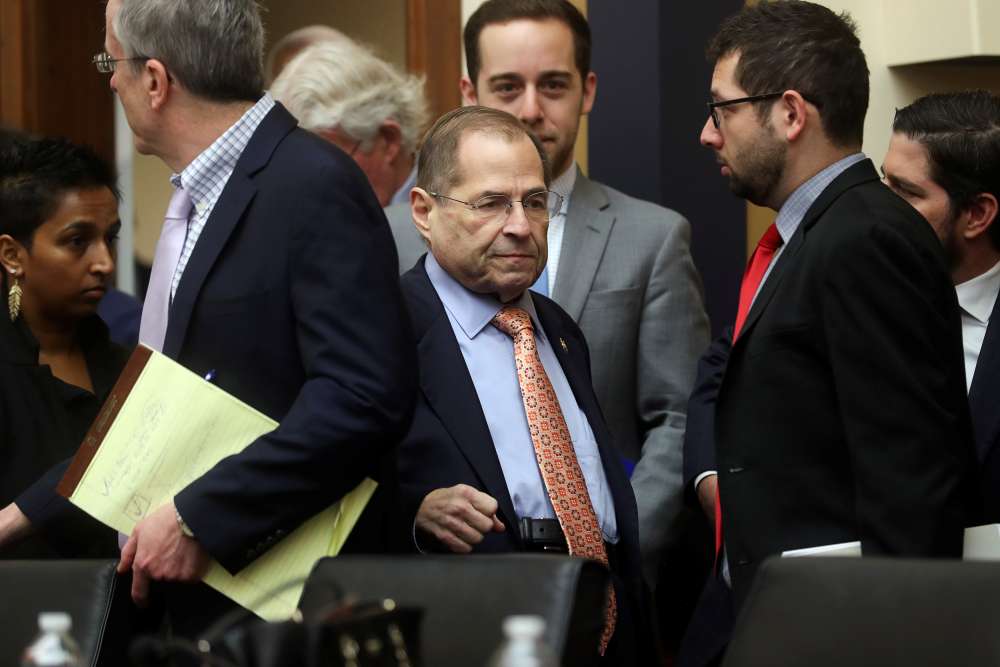 As tensions rose between the Republican president and the Democrats who control the House of Representatives, lawmakers also negotiated for future testimony by Special Counsel Robert Mueller on his Russia investigation and debated whether to launch high-stakes impeachment proceedings against Trump.

The showdown between Trump and the Democrats intensified after McGahn, heeding Trump’s instructions, ignored a subpoena from the Democratic-led House Judiciary Committee and did not show up to testify before the panel.

Undeterred in a growing conflict with Trump over congressional powers to oversee his administration, committee Chairman Jerrold Nadler announced he had issued fresh subpoenas to Hicks, the former White House communications director, and to Annie Donaldson, McGahn’s former chief of staff.

The subpoenas seek testimony and documents in connection with the committee’s probe of whether the president obstructed Mueller’s inquiry into Russian interference in the 2016 U.S. election and contacts between Trump’s campaign team and Moscow.

Despite McGahn’s absence, the committee held a hearing lasting about a half-hour that featured an empty chair at the witness table. Nadler said at the hearing, “Let me be clear: this committee will hear Mr. McGahn’s testimony, even if we have to go to court to secure it.”

In Mueller’s investigative report, McGahn was a key witness regarding possible obstruction of justice by Trump. Career prosecutors not involved in the case have said the report contained strong evidence that Trump committed a crime when he pressured McGahn to fire Mueller and later urged him to lie about it.

Attorney General William Barr, the top U.S. law enforcement official and a Trump appointee, on May 2 snubbed the same committee, which later voted to hold him in contempt of Congress for not handing over a full, unredacted Mueller report.

At the hearing skipped by Barr, an empty chair also figured prominently and a Democratic committee member placed a ceramic chicken on the table in front of it for the cameras. The ceramic chicken did not make a repeat appearance on Tuesday.

After the hearing that McGahn skipped, several Democrats said the Judiciary Committee was negotiating with Mueller about his possible testimony. A redacted version of Mueller’s report was released by Barr last month.

“We are working with his team on that right now. I can’t tell you for sure if he’s going to come,” said Debbie Mucarsel-Powell, a Democratic committee member.

“This is becoming a regular event. It’s called the circus of Judiciary,” said the panel’s top Republican, Doug Collins.

Trump, seeking re-election in 2020, is refusing to cooperate with many congressional probes into his administration, his family and his business interests.

In the early days of Trump’s presidency, few aides had more frequent access to him than Hicks, a former model and public relations consultant hired by Trump into the White House from his daughter Ivanka Trump’s staff. She rose to communications director, but resigned from the White House in March 2018.

Any impeachment effort would begin in the House, led by the Judiciary Committee, before action in the Republican-led Senate on whether to remove Trump from office.

No U.S. president has ever been removed from office through impeachment, a process spelled out in the Constitution.

House Oversight Committee Chairman Elijah Cummings, who is locked in another legal battle with Trump over access to his financial records, told reporters Democrats are “moving more and more” toward using impeachment as an option in the showdown with Trump.

Taking it a step further, Democratic Representative Alexandria Ocasio-Cortez told reporters: “It’s time for us to, at the very least, open an impeachment inquiry.”

Other Democrats remained cautious, saying a federal judge’s decision against Trump on Monday in a subpoena case shows a step-by-step approach in the courts can bring results.

Democrats have debated for months whether to initiate the impeachment process, with some lawmakers clamoring for it. But senior leaders including House Speaker Nancy Pelosi have counseled caution for fear of a voter backlash that could benefit Trump.

It was not immediately clear when Democrats might pursue a contempt citation against McGahn. The rules require 48-hour notice, but many House members will be flying out of town on Thursday for the Memorial Day holiday, a logistical challenge that means any contempt vote would be unlikely before June.

The redacted, 448-page Mueller report, 22 months in the making, showed how Moscow interfered in the 2016 U.S. presidential election in Trump’s favor and detailed Trump’s attempts to impede Mueller’s probe.

The report found there was insufficient evidence to conclude that a criminal conspiracy between Moscow and the Trump campaign had taken place. It made no recommendation on whether Trump obstructed justice, leaving that question up to Congress.

By In Cyprus
Previous articleIncome of doctors and other self-employed professionals scrutinised
Next articleLifeguard, nudist brawl on beach in occupied Cyprus (video)