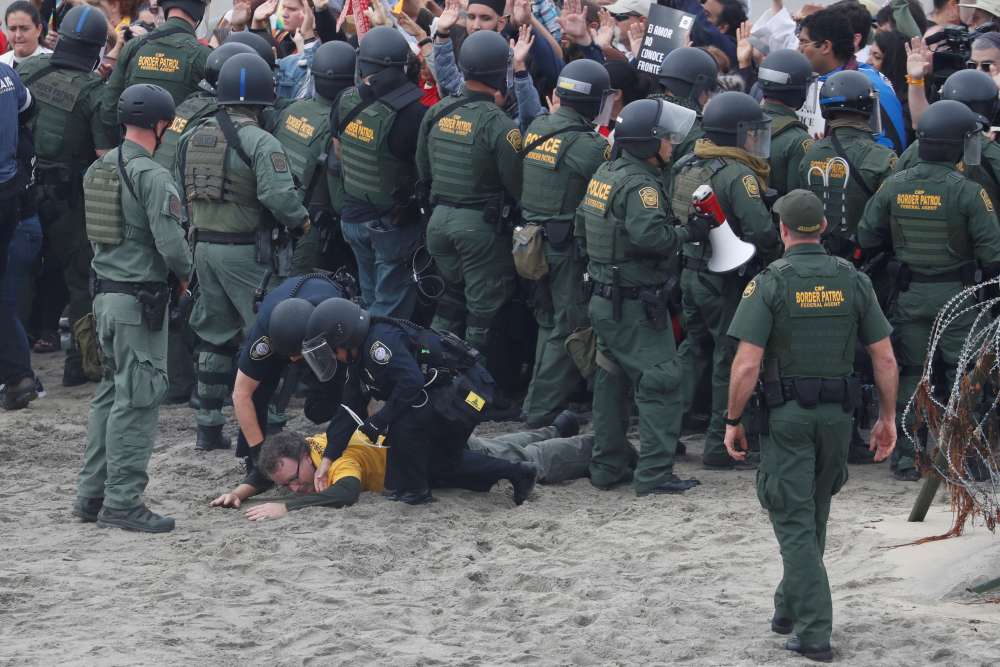 Kneeling in front of riot police, 32 religious leaders and activists were arrested at the U.S. border fence in San Diego on Monday during a protest to support the Central American migrant caravan.

More than 400 demonstrators, many leaders of churches, mosques, synagogues and indigenous communities, sought a halt to detention and deportation of migrants and for the United States to welcome the caravan that arrived in Tijuana, Mexico in November.

Singing and praying, religious leaders moved forward in lines of four to six, some wearing T-shirts reading, “Love Knows No Borders.” They were handcuffed and led away by federal agents upon entering a restricted area in front of the fence.

“As a Quaker who believes in our shared humanity…We’re calling on the U.S. to respect the rights of migrants,” said Joyce Ajlouny, general secretary of the American Friends Service Committee, which has run a week of actions to back migrants.

The arrests marked the second confrontation with U.S. authorities since the caravan reached Tijuana. U.S. Border Patrol agents fired tear gas at migrants on Nov. 25 after they said they had stones thrown at them.

Thousands of migrants are living in crowded shelters and encampments in Tijuana after traveling from Central America to escape poverty and violence. They may have to wait weeks or months to claim asylum at the U.S. border.

Data released on Monday by U.S. Customs and Border Protection (CBP) showed asylum claims at the U.S.-Mexico border rose 67 percent in the 2018 fiscal year from a year earlier.

U.S. immigration officials say these claims, most of which are accepted, exploit a legal loophole allowing migrants to enter the United States while they await a court hearing on their asylum case.

“As the majority of these claims will not be successful when they are adjudicated by an immigration court, we need Congress to act to address these vulnerabilities,” CBP Commissioner Kevin McAleenan said in a statement.

A U.S. judge in November blocked Trump’s proclamation to bar migrants who cross the U.S.-Mexico border illegally from seeking asylum.