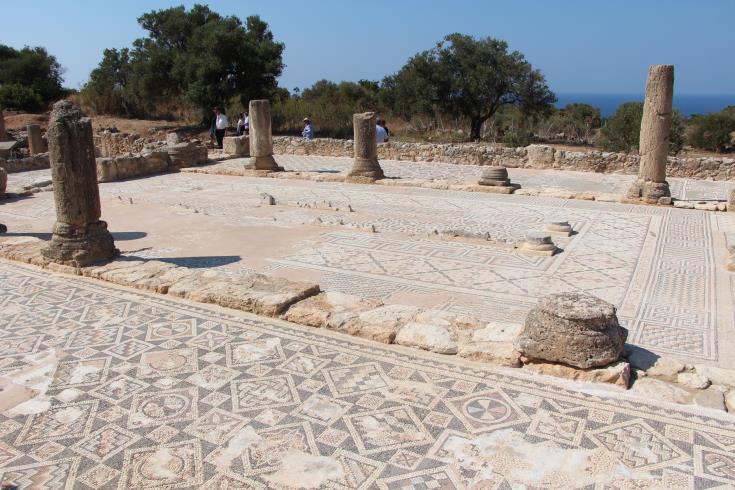 Mosaics of unparalleled beauty and craftsmanship, decorating the floor of the Early Christian basilica of Agia Triada, in Cyprus’ Karpas peninsula, together with the byzantine church of Agios Philon and its outstanding opus sectile, were restored after decades of negligence, as a result of cooperation between Greek Cypriots and Turkish Cypriots.

Stabilization and conservation works in the two sites, carried out by archaeologists and conservationists from both communities, were completed recently under the guidance of the bicommunal Technical Committee for Cultural Heritage and the UNDP, with European Commission funding.

To mark the event, a project completion ceremony took place on Saturday, in Agios Philon, in the northeastern tip of Cyprus, in the presence of Kjartan Bjornson, the Head of the European Commission’s Unit for Cyprus Settlement Support. The event coincided with International Day of Peace.

The Agia Triada mosaics date back to the 5th century AD and stabilization works started in October 2018. The mosaics were subsequently buried ahead of winter time and works restarted and were completed this summer. The last archaeological excavations on the site, under the guidance of Athanasios Papageorgiou, were carried out in 1973.

Restoration works in Agios Philon church, which bears the name of the first Christian Bishop of the ancient city of Karpasia – that later gave its name to the whole peninsula – were completed in January, earlier this year. The byzantine church is a 12thcentury AD building, which sits on top of the ruins of an earlier church.

“For over half a century, it is not only the people of this island that have been suffering, but so too have the monuments” said Takis Hadjidemetriou, the Greek Cypriot Head of the Technical Committee.

“The ruins that we see around us are our affair, our responsibility. The work to preserve and restore them is simply a way of seeking forgiveness from the monuments and giving a promise to the people for peace and corporation” he added.

He sent finally the message that “Greek Cypriots, Turkish Cypriots, Maronites, Armenians and Latins, all love this country in the same way and keep hope alive for a new beginning in our history, with mutual understanding, respect and peace.”

Cultural heritage, which has been the victim of the conflict in the past, should now contribute to achieving a culture of peace and corporation, said Ali Tuncay, the Turkish Cypriot Head of the Technical Committee.

The two important monuments we revived today, represent our common richness and heritage, he added, while noting that “our most essential duty is to transfer this common heritage to future generations.”

Tuncay said finally that we all wish and desire to have reconciliation, peace and welfare on our island.

In his address, Bjornson spoke of “an example of open cooperation and mutual trust between the communities in Cyprus” represented in the Technical Committee.

The European Commission will continue its support, in order to protect cultural heritage and promote confidence and trust in Cyprus, he said.

UNDP Senior Programme Manager Tiziana Zennaro noted that the event, held on International Day of Peace, was not only recognizing the crucial work to protect the rich cultural heritage of Cyprus, but also “the spirit of cooperation between the communities of the island to protect their shared heritage.”

Mosaics are of unique quality and are similar to those found in the House of Efstolios, in ancient Curium, Marangou explained, noting that it might have been the same craftsman who made both of them. An inscription on the basilica floor, with the names of the donors, is still preserved, she added.

“In essence, these mosaics have been abandoned for 45 years” said Charalambous, adding that mosaic stones, which come from Mamonia in Paphos, were badly conserved and some were lost as a result.

The conservationist said however that missing mosaics were not replaced, as this practice – which prevailed throughout the 90’s – is considered to alter the mosaics’ true depiction.

Their quality is undoubtedly important, and this becomes evident in the precision of geometric designs, made by local workshops of the time, he added.

Four archaeologists, both Greek Cypriots and Turkish Cypriots, worked for the stabilization and conservation works, along with Turkish Cypriot workers who helped clean the site.

A similar introduction followed in Agios Philon, with Marangou referring to the precious opus sectile decorating the floor of the basilica and the adjoining baptismal complex. Charalambous noted that the construction of the floor design was probably more expensive than mosaics at that time.

By In Cyprus
Previous articlePresident Anastasiades to meet with UNSG with a clear view on the resumption of settlement talks
Next articleWoman missing from her home in Strovolos, Nicosia (pic)