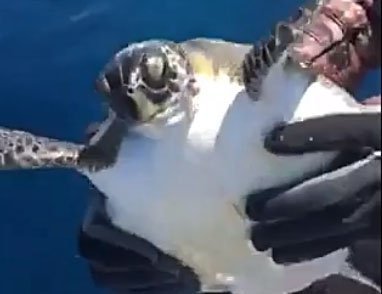 The EU funded INDICIT ll  programme and the Society for the Protection of Turtles (SPOT) have posted a video of a turtle found off the coast of north Cyprus with a plastic ring, possibly from a shampoo bottle or similar, stuck around its neck.

Luckily Barış and Barkın Ercantan were on hand to remove the ring and release the turtle back into the sea, they said on their Facebook pages.

Watch the video below.

The consortium, composed of researchers from 12 partners in 8 different countries (France, Greece, Italy, Portugal, Spain, Tunisia, Turkey and the United Kingdom), is committed to support the implementation of EU’s Marine Strategy Framework Directive (MSFD) and other international environmental policies aiming at protecting the marine environment (especially the Barcelona convention, the OSPAR convention, the HELCOM  etc).

SPOT (the North Cyprus Society for the Protection of Turtles) is an NGO that focuses on the monitoring, research and protection of marine turtles.

By In Cyprus
Previous articleItaly wants to cut debt through growth, investments – Conte tells EU
Next articleYouth for Climate Cyprus fundraise in run up to September 20 protest