Turnout falls to lowest yet in French ‘yellow vest’ protests 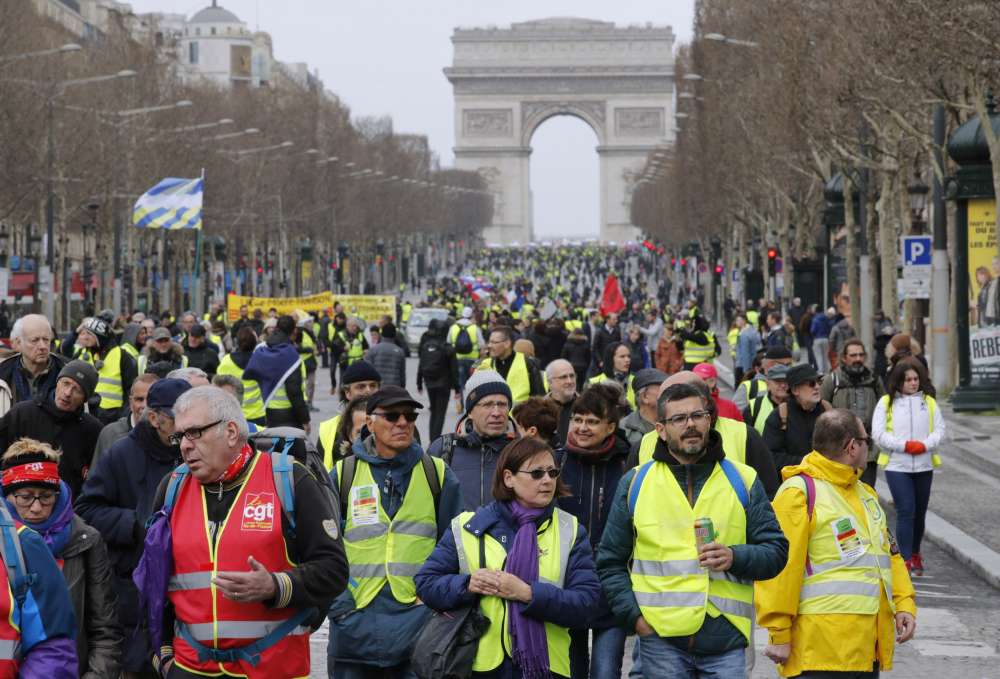 Turnout at “yellow vest” protests across France, a backlash against high living costs that has lasted nearly four months, fell on Saturday to its lowest level yet.

People wearing the neon high-visibility vests that have come to symbolise the movement were joined in Paris by others donning pink tops, as child-care workers turned out against a reform of their unemployment subsidies.

Demonstrators on the Champs-Elysees avenue were pushed back at one point by water cannon, and sporadic clashes with police erupted in other cities including Lyon, Bordeaux and Toulouse, though the protests largely passed off peacefully.

Some protesters staged a “flashmob” at Paris’ Charles de Gaulle airport, waving French flags and dancing in one of the terminals, television footage on BFM TV showed.

Some 28,600 people turned out overall, according to the interior ministry, with 3,000 of those in Paris – down from 39,300 across France the previous Saturday, and a far cry from the nearly 300,000 who blocked roads and marched in cities in mid-November.

Some campaigners are calling for a bigger show of force next weekend, when a series of town hall-style debates launched by President Emmanuel Macron to try to quell anger is due to end.

What started out last November as an outcry against Macron’s plan to hike fuel taxes — part of his bid to push a cleaner energy model — has morphed into a broader, leaderless movement decrying the government as out of touch with the hardships faced by some households and low-income workers.

Since riots in December, recent demonstrations have been largely peaceful. On Saturday in Paris, 19 people had been arrested by 6:35 p.m., police said.

In an Ifop poll taken on March 7 and 8 for the online news site Atlantico, 54 percent expressed sympathy with the ‘yellow vests’ — up from 50 percent in mid-February, but down from a peak of 72 percent.

Macron’s popularity has also improved in recent weeks. An Ipsos poll released on March 6 gave him an approval rating of 28 percent, up 8 points since December.