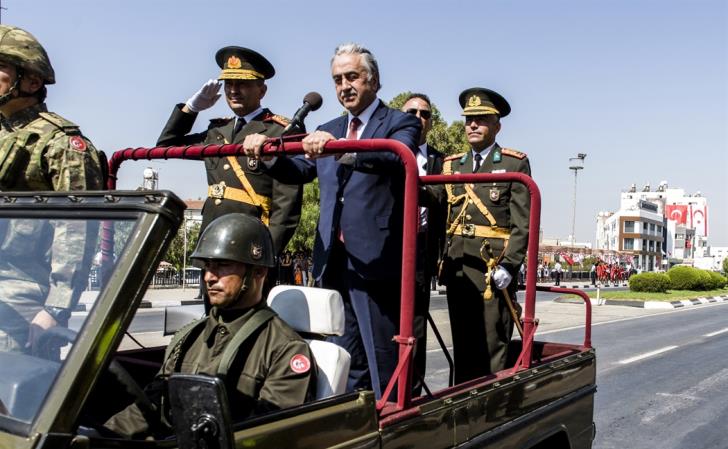 Celebrations for the 35th ‘independence’ anniversary of the TRNC, began on Thursday with a military parade in Fazil Kucuk Avenue in north Nicosia.

Previously, at 9 am, Turkish Cypriot leader, Mustafa Akinci gave a speech from the ‘Presidential Palace.’

Turkey stands by the Turkish Cypriots on this happy day when the Turkish Republic of Northern Cyprus was proclaimed and will always continue to do so. Happy 35th anniversary, #TRNC! pic.twitter.com/iukSrKnPLy

Akinci lead a wreath at Ataturk’s monument and will meet with Oktay later in the day.

We will not accept the perception of the Greek Cypriot leadership which thinks that for the state to be operational, the Turkish Cypriots must be pushed to become a minority, Akinci said, while adding that he will continue to struggle for political equality, as provided for by the UN parameters.

Akinci went on to say that the Turkish Cypriot side is ready to create a new federal cooperation based on two politically equal constituent states. It depends on the willingness of both sides to create the conditions for equality, freedom and security, he said and reiterated that he wishes to see an understanding of the sharing of powers and wealth in an equal way in order to avoid new tensions in the region. “Until now, it is a shame that the approach of the Greek Cypriots is not promising,” he said.

He also talked about the rise of crime in the Turkish-occupied north, noting that since the creation of TRNC in 1983, there had been 181 murders. 53 of the victims were women, a number much higher in proportion of population, compared to other states, Akinci said.

Speaking about the education in the Turkish Cypriot side, Akinci said that currently there are 16 universities in operation, however the number is expected to increase to 30, after other institutions receive licensing. The number of students is around 102,000, he said. “It’s not just the numbers. It is very important to have quality education and for the universities to have good facilities,” Akinci said.

Regarding tourism, he said that the number of rooms in tourist accommodations has risen from 3,555 in 1983 to 25,000 in October 2018. The low exchange rate of the Turkish lira has made the Turkish-occupied a more attractive holiday destination, Akinci added.

There is no competition in tourism with the “South” as he said, due to the fact that the main touristic product in the north are the casinos, not the five-star hotels of the “South.”

By In Cyprus
Previous articlePsevdas
Next articleJustice system will collapse if not reformed, Minister says