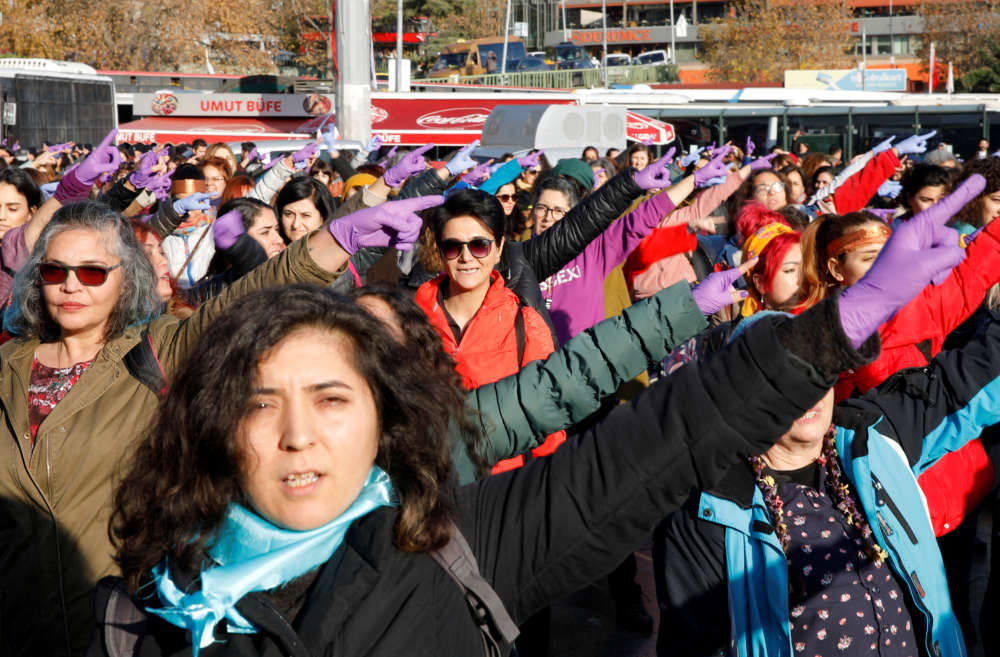 Female Turkish lawmakers sang a Chilean song in parliament that has been taken up in demonstrations globally to protest violence against women, and displayed photographs of women who have been killed.

Unofficial data compiled by a Turkish advocacy group shows men murdered 440 women in the country last year, more than doubling from 2012 when Ankara passed a law to protect women. Turkey does not keep official statistics on femicide.

Some women’s groups attribute the rise to Turkey’s failure to implement the legislation.

Last week, seven demonstrators were detained in Istanbul at a so-called Las Tesis protest, named after a Chilean feminist collective that inspired a song and dance called “The rapist is you” that has prompted rallies in several countries.

More such rallies were planned on Sunday in Izmir and Istanbul.

On Saturday, about eight MPs from the main opposition Republican People’s Party (CHP) pounded on parliamentary tables in Ankara and sang a Turkish version of the song, while colleagues held up some 20 pictures of the faces of women said to be killed in domestic violence.

CHP Deputy Sera Kadigil said the aim was to highlight the plight of women subjected to violence and murder, and she addressed Interior Minister Suleyman Soylu, who was also in the parliament.

“There is a dance that started in Chile to draw attention to violence against women all over the world: Las Tesis,” she said. “Thanks to you, Turkey is the only country in which you must have (parliamentary) immunity to participate,” she added though there have been demonstrations outside parliament.

Soylu said everyone shared the pain of each woman killed in Turkey, adding the song was sung in Chile for different reasons. He also rejected the lyrics calling Turkish police, judges, the state or the president a “rapist” or “killer”.

World Health Organization data say 38% of women in Turkey are subject to violence from a partner in their lifetime, compared to about 25% in Europe.

By In Cyprus
Previous articleMajor states snub calls for climate action as U.N. summit wraps up
Next articleMainly fine with above average temperatures