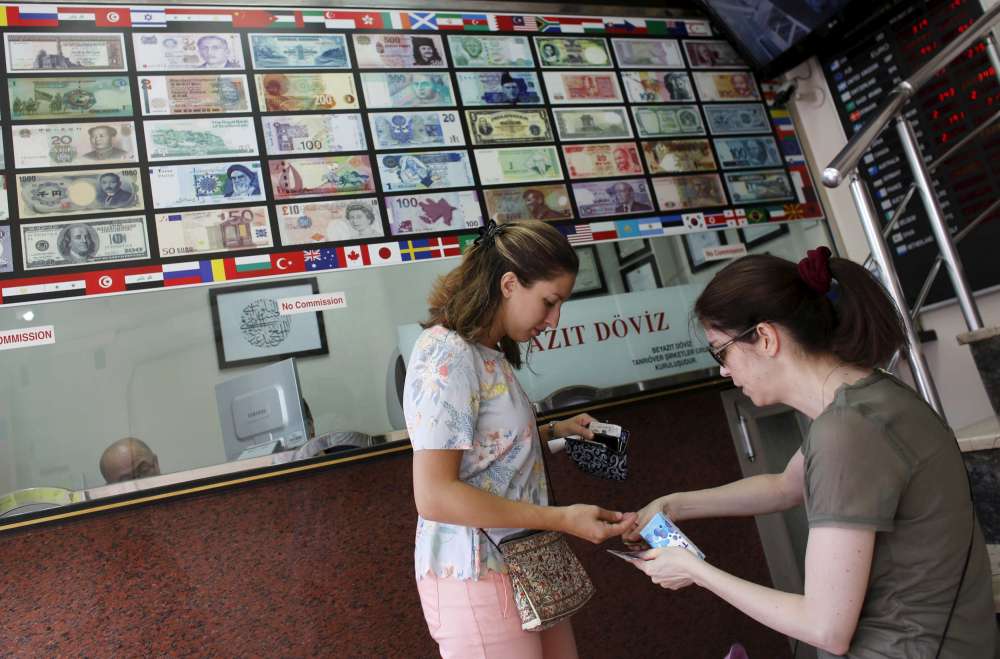 Turkey’s lira plunged as much as 14 percent on Friday as worries about President Tayyip Erdogan’s influence over monetary policy and worsening U.S. relations snowballed into a market panic that also hit shares of European banks.

The sell-off has deepened concern about exposure to Turkey, particularly whether over-indebted companies will be able to pay back loans taken out in euros and dollars after years of overseas borrowing to fund a construction boom under Erdogan.

Erdogan’s characteristic defiance in the face of the crisis has further unnerved investors. The president, who says a shadowy “interest rate lobby” and Western credit ratings agencies are attempting to bring down Turkey’s economy, said in a speech overnight that Turks should “have no worries”.

“If they have their dollars, we have our people, our God,” he told the crowd in the Black Sea city of Rize.

That is unlikely to mollify investors who are also worried by a growing dispute with the United States. The NATO allies are at odds over the detention in Turkey of U.S. evangelical pastor Andrew Brunson on terrorism charges.

The tensions with Washington have, for investors, underscored Turkey’s authoritarian trajectory under Erdogan.

“The basic reason the exchange rate has gone off the rails is that confidence in the management of the economy has disappeared both domestically and abroad,” said Seyfettin Gursel, a prominent economist and a professor at Turkey’s Bahcesehir University.

“First of all, confidence needs to be regained. It is obvious how it will be done: since the final decision-maker of all policies in the new regime is the president, the responsibility of regaining confidence is on his shoulders.”

The lira was at 5.93 against the dollar at 0954, GMT, down nearly 7 percent. It briefly fell as much as 14.6 percent — its biggest one-day drop since early 2001 — before paring losses. Shares of European lenders also dropped, hit by concern about their Turkish exposure.

The currency has fallen more than 35 percent this year after losing nearly a quarter of its value in 2017. This week alone, it has lost about 15 percent. Such relentless depreciation drives up the cost of imported goods from fuel to food for ordinary Turks.

“The situation of Turkey cannot go on for much longer — I think they will have to intervene,” Cristian Maggio, head of emerging markets strategy at TD Securities, adding that the intervention needed to be “drastic”.

“Turkey is playing a very dangerous game. They keep lagging behind the curve and the pace of the depreciation and the penalty that the market inflicts on Turkey when it sells off is increasing at a more than linear pace, almost exponentially.”

Erdogan, a self-described “enemy of interest rates”, wants cheap credit from banks to fuel growth, but investors fear the economy is overheating and could be set for a hard landing. His comments on interest rates — and his recent appointment of his son-in-law as finance minister — have heightened perceptions that the central bank is not independent.

The central bank raised interest rates to support the lira in an emergency move in May, but it did not tighten at its last meeting.

Finance Minister Berat Albayrak — Erdogan’s son-in-law, appointed last month — is due to announce the government’s latest plan for the economy at a press conference later on Friday.

“The focus is on what comes out of the conference by Finance Minister Albayrak today, but also what President Erdogan says to assure not only the domestic population but also global investors with respect to the lira,” said Koon Chow, an emerging market strategist at UBP.

“If (Albayrak) can make a credible commitment to sizeable fiscal tightening and if that is accompanied by more interest rate hikes, people may give them the benefit of the doubt.”

While Turkey and the United States disagree over a host of issues, the most pressing disagreement has been over Brunson and the detention of other U.S. citizens in Turkey. A delegation of Turkish officials held talks with their counterparts in Washington this week but there is no sign of a breakthrough.

While there was no statement from the Turkish side, U.S. State Department spokesperson Heather Nauert said wide-ranging conversations had been held.

“I would say we would define progress as Pastor Brunson being brought home,” Nauert said.