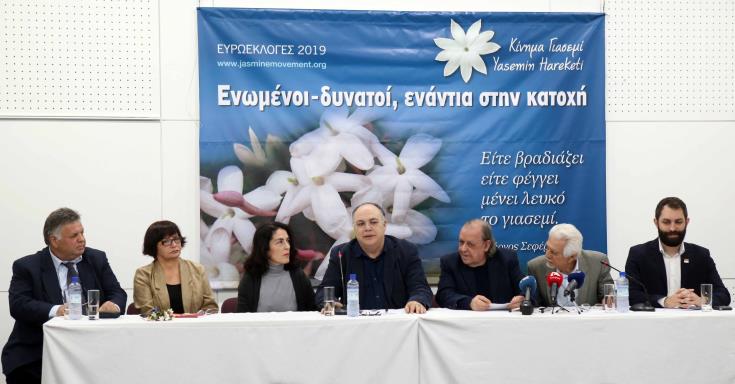 The Turkish Cypriot movement “Yiasemi” (Jasmin) presented its candidates for the upcoming European Parliament elections, during a press conference held on Wednesday, in Nicosia.

Turkish Cypriot publisher and writer Sener Levent said they were running for the European Elections “to reveal what is actually happening” and explained that while “the European Acquis Communautaire is in force in the southern part of Cyprus, Ankara’s acquis is in place in the northern part”.

The Afrika daily’s publisher and journalist said that “under the Islamofascist dictatorship of Tayyip Erdogan and his party, human rights have been annihilated in Turkey, justice has turned into a whip against the opposition, and prisons are full of people who have committed the offence of expressing their view”.

He noted that Cyprus has been under Turkey`s occupation since 1974, “the most tragic year for our homeland”.

This occupation, he added, is also a political one, since the systematic transfer of population from Turkey has changed the demographic structure and Turkish Cypriots have become a minority. Turkish settlers are five times more than the Cypriots and the plundering of the land of Greek Cypriots which was violently taken using military force in 1974 continues, said Levent.

He also said that “Africa” has suffered all forms of repression and violence because it calls Turkey an occupation force.

To date, Levent noted, the leaderships and the political parties have failed to take serious steps towards a solution of the Cyprus problem and peace. He said that the missing persons issue remains unresolved, the fenced – off area of Varosha is still closed and war criminals have not been brought to trial.