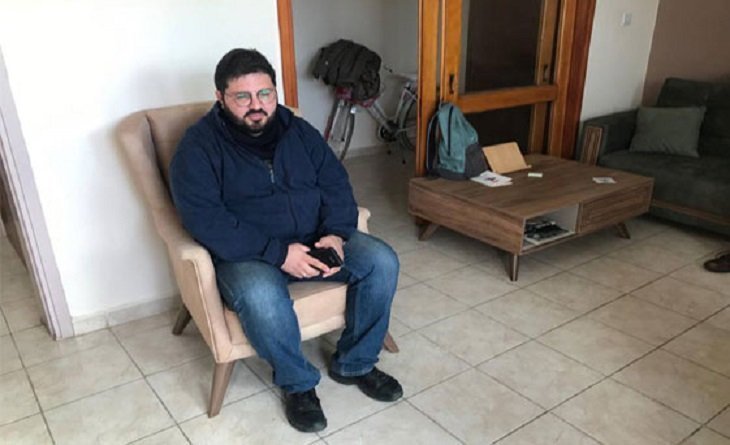 Turkish Cypriot conscientious objector Halil Karapasaoglu was arrested on Tuesday after he refused to pay a fine of 2,000 Turkish lira for not reporting for reserve army duty in the occupied north.

He will serve a sentence of 20 days.

According to Turkish Cypriot Kibris Postasi, Karapasaoglu, a graduate student, had been waiting for “police” to arrest him in his house, along with his friends and family. He had attended an exam earlier in the morning.

Around 11 am he was informed by “authorities” that they would come to arrest him.

Supporters of Karapasaoglu and members of the Conscientious Objection Initiative gathered outside his house.

Karapasaoglu did not resist arrest. He was taken to a hospital for medical examinations and will be transferred to the ‘central prison’ around 5 am.

Speaking on behalf of the European Bureau for Conscientious Objection, Murat Kanatli said that the arrest is a “wound for democracy” and that Karapasaoglu is a “hostage of Turkey.”

He urged people who want to express their support to Karapasaoglu, to attend a protest outside the ‘central prison’ of the occupied north, at 5 am.

The decision would have been converted into a 20 day prison sentence if the fine was not paid in ten days.

Karapasaoglou had already stated that he would not pay the fine. He explained that paying the fine would render his action meaningless.

Turkish #Cypriot constientious objector Halil #Karapasaoglu was arrested and sent to prison today after he refused to pay a fine of 2000 TL for not joining reserve army duty. “I will not fire a bullet to my friend Antonis” he had stated pending the trial #Cyprus pic.twitter.com/oMDgztFPIv

By In Cyprus
Previous articlePolice say close to solving 15 burglaries in Latsia
Next articleCyprus trade deficit drops to €4.2 billion in January – November 2018