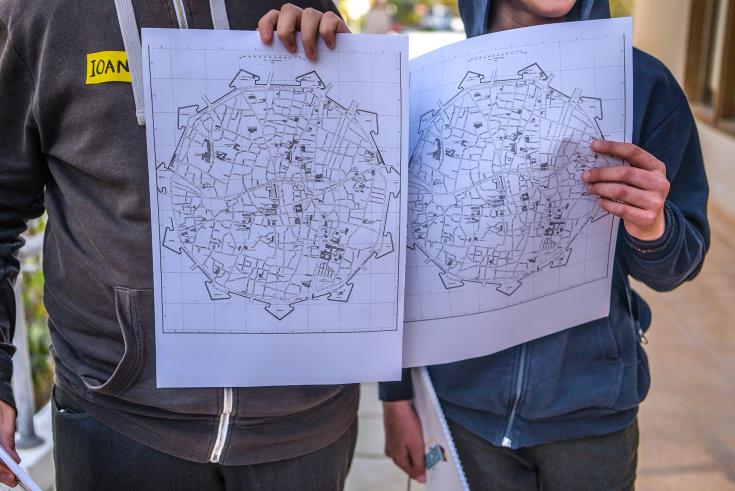 A total of fifty-two Greek Cypriot and Turkish Cypriot pupils participated on Wednesday in a study visit, in the old town of Nicosia, at both sides of the divide, that took place under that auspices of the bicommunal Technical Committee on Education.

Meanwhile, 3500 pupils have so far participated in the bicommunal Imagine project which aims to increase contact and cooperation between pupils and teachers of the two communities in Cyprus.

The study visit under the title “Learning from Nicosia” took place from 08:30 am to 12:00 pm, across the buffer zone in Nicosia walled city, where students had the opportunity to explore elements of the multicultural character of the city.

Zembylas told the Cyprus News Agency (CNA) that the aim of today’s “Walk of Nicosia”, that took place for the first time, on a pilot basis, was to give the opportunity to Greek Cypriot and Turkish Cypriot pupils to get to know the multicultural character of the old town of Nicosia, at both sides of the divide.

He added that the climate during the study visit was very positive.

He went on to say that these visits constitute a new initiative of the Technical Committee on Education and are called study visits since they have an educational aim and content.

He said that they aim at bringing together Greek Cypriot and Turkish Cypriot pupils to study the monuments of cultural heritage or the natural environment all over Cyprus as well. Therefore, our goal is to have more such study visits in the future, he added.

Asked by CNA if the Technical Committee aims to promote other such activities that will bring pupils from both communities together, Zembylas said that “we are continuously looking into new ideas that will bring together pupils and teachers, or will create opportunities to promote peace, anti-racism and human rights through education, in consistency to our mandate. This year we aim to provide seminars for teachers and parents, to create an educational material that will promote these goals, organize conferences, workshops etc,” he added.

Asked about the bicommunal Imagine project which is implemented under the auspices of the Technical Committee, Zembylas noted that the project’s success has gone beyond every expectation. “Almost 3500 pupils from both communities, from every district of Cyprus, have so far participated in the project. Despite the first hesitations that may exist, the children’s enthusiasm is evident,” he added.

He said that there are children who continue to maintain contact, either via technology or by meeting each other, even after the conclusion of the Imagine activities at the Home for Cooperation. “Generally, the messages we have been receiving are very encouraging and we move forward step by step to enrich the programme of contacts.

Therefore from this year we have the potential of holding more than one meeting at the Home of Cooperation, to cooperate on common projects etc,” he added.

Zembylas said that organizing more than one meeting was a measure adopted since the children themselves asked for it, as they consider that one meeting is not enough to get to know each other and to cooperate in the framework of the project. Therefore, the Imagine project is continuously enriched, he added.

Asked if pupils and their parents respond in a positive way to the activities implemented under the Committee’s auspices, Zembylas said that their response is surprisingly positive.

“There are a lot of applications for participation in the project we are trying to respond to, and their number increases every year, as the message sent out is that Imagine is a remarkable educational project, which provides unique experiences, knowledge and skills to the children who participate in it,” he noted.

Imagine takes place under the auspices of the Bi-Communal Technical Committee of Education and implemented by the Association for Historical Dialogue and Research (AHDR) and the Home for Cooperation (H4C) with the support of the Federal Foreign Office of Germany, as well as the UN Peacekeeping Force in Cyprus and the UN Good Offices mission.