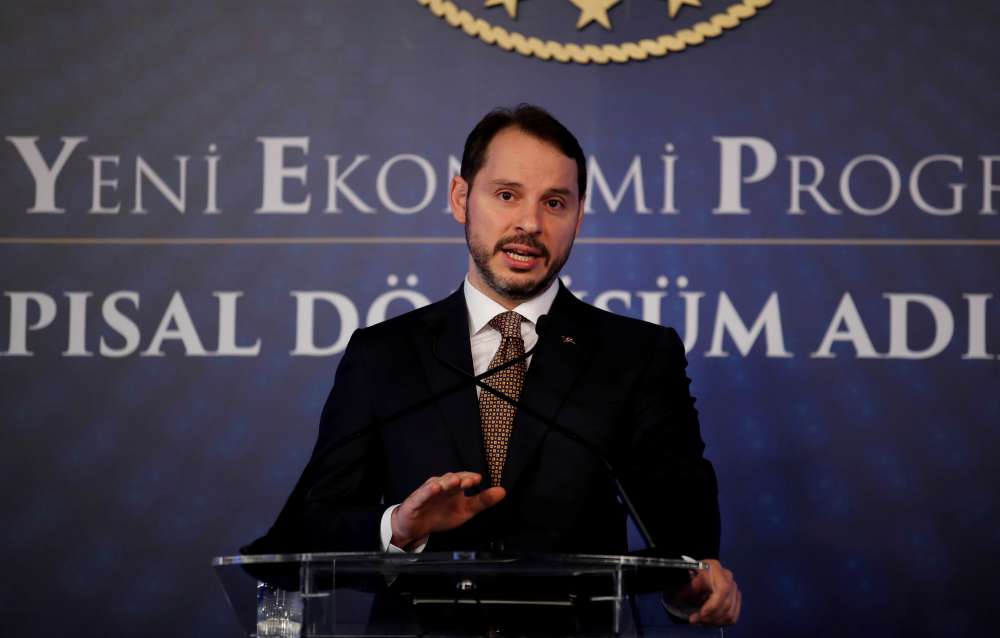 Turkish Finance Minister Berat Albayrak offered little convincing detail of his economic turnaround plan and failed to enthuse investors at a private meeting in Washington on Thursday, according to four people who attended.

Some 400 investors packed into a room at a Washington hotel, with dozens standing at the back, as Albayrak and Turkish central bank governor Murat Cetinkaya outlined the reform package that Albayrak unveiled in Istanbul on Wednesday.

Their upbeat view of Turkey’s expected rebound from recession failed to resonate, said the sources, who requested anonymity. One told Reuters that Albayrak pointed to a recent dip in inflation and the improving current account balance to argue that Turkey was doing much better today than in October, when it was emerging from a major currency crisis.

“I don’t think he persuaded anybody, it did not go well,” said the investor, who attended the conference hosted by investment bank JPMorgan as the International Monetary Fund and World Bank spring meetings kicked off in Washington.

The investor said the softer policy stances recently adopted by the U.S. Federal Reserve and the European Central Bank, which have led investors to seek returns in riskier assets, was helping underpin Turkish markets.

“If it weren’t the case that the Fed and ECB currently present no risk to emerging markets, I would be a big seller of Turkey,” the investor said.

The Turkish lira slid 1.4 percent on Friday and the main Turkish stock index was down 1 percent.

Turkey’s finance ministry could not immediately be reached for comment on Thursday’s presentation, while the central bank declined to comment.

The lira tumbled some 30 percent in 2018, causing the economy to tip into a recession that could last through the second half of this year. The Fed and ECB’s dovish pivot in recent months could offer some relief for the currency.

On Wednesday, before travelling to Washington for the IMF/World Bank meetings, Albayrak pledged to inject nearly $5 billion in new capital into banks struggling with a spike in non-performing loans.

But analysts said the long-awaited reform package, which also included promises on taxes and exports, did not include the ambitious long-term commitments needed to revive an economy plagued by high inflation and a fragile currency.

Three of the investors at the invitation-only presentation in Washington said Albayrak, who is Turkish President Tayyip Erdogan’s son-in-law, mostly restated the reform package, while Cetinkaya had said little during the hour-long presentation.

“I don’t think anybody left having changed their ideas about Turkey, or be more hopeful about it than they were yesterday,” said a second investor as he left the conference.

A third attendee said: “There has been a general sense among investors that more needs to be done to restore Turkey’s credibility and there was not much change from that.”

Late on Thursday, Albayrak tweeted: “We explained our ‘Structural Reform Steps’ package and the economic policies of the new period at the investor meeting organised by JP Morgan,” He also held meetings with “many international funds in Washington”, the finance minister added.