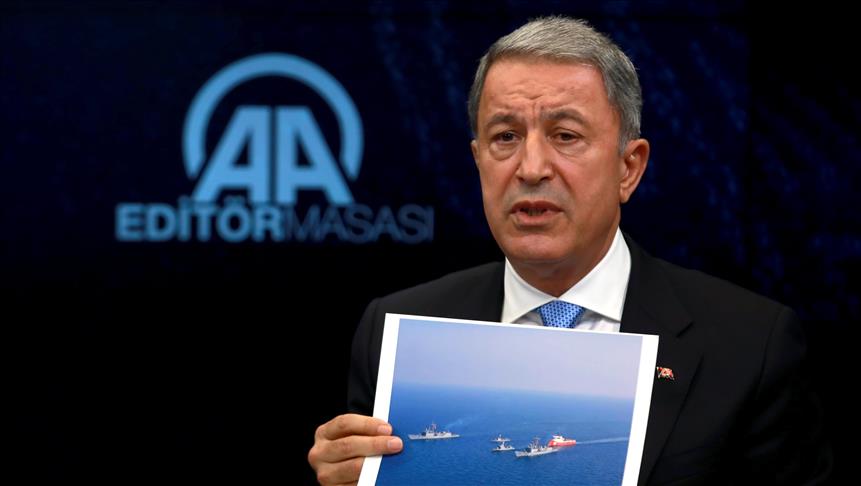 Turkey will not allow Greece to interfere in its activities in the eastern Mediterranean, its defence minister said, a few days after Ankara complained that a Greek frigate had harassed a Turkish energy exploration ship in the region.

The issue of energy exploration in the region, along with a dispute over Greece’s maritime borders, have revived tensions between the NATO allies who are separated by the Aegean Sea.

Turkey, Greece and the internationally recognised government in Cyprus have overlapping claims of jurisdiction for offshore oil and gas research in the eastern Mediterranean.

“Our warships are providing the necessary protection in the region. We will never tolerate new harassment,” Defence Minister Hulusi Akar told Turkey’s state-owned Anadolu news agency in an interview broadcast live on Wednesday.

He said no project was possible in the eastern Mediterranean without the involvement of Turkey and northern Cyprus, a breakaway state only recognised by Ankara.

Anadolu reported earlier that the Turkish ship Barbaros Hayreddin Pasa was carrying out seismic research in the region last week when it was harassed by a Greek frigate until the Turkish navy intervened.

A Greek defence source denied there was an incident but said the Greeks were monitoring the Turkish ship’s activity. It seemed to be in an area claimed by the Cyprus government for future hydrocarbons exploration, west of the island.

Separately, Turkey warned Greece on Tuesday it would not tolerate a shift in Greece’s maritime border, drawing a sharp rebuke from Athens that it would decide when and how it exercises its sovereign rights.

The statements from both sides came a few days after Greece’s former foreign minister said Greece planned to extend its territorial waters from six to 12 miles to the west of the country. Turkey is situated to the east of Greece.

“We have (taken) all kinds of measures. I want everyone to know that we will not tolerate a fait accompli of any sort on this subject,” Akar said

“We are in favour of solving problems with talks and peaceful methods before they turn into a hot conflict in any way,” he added.