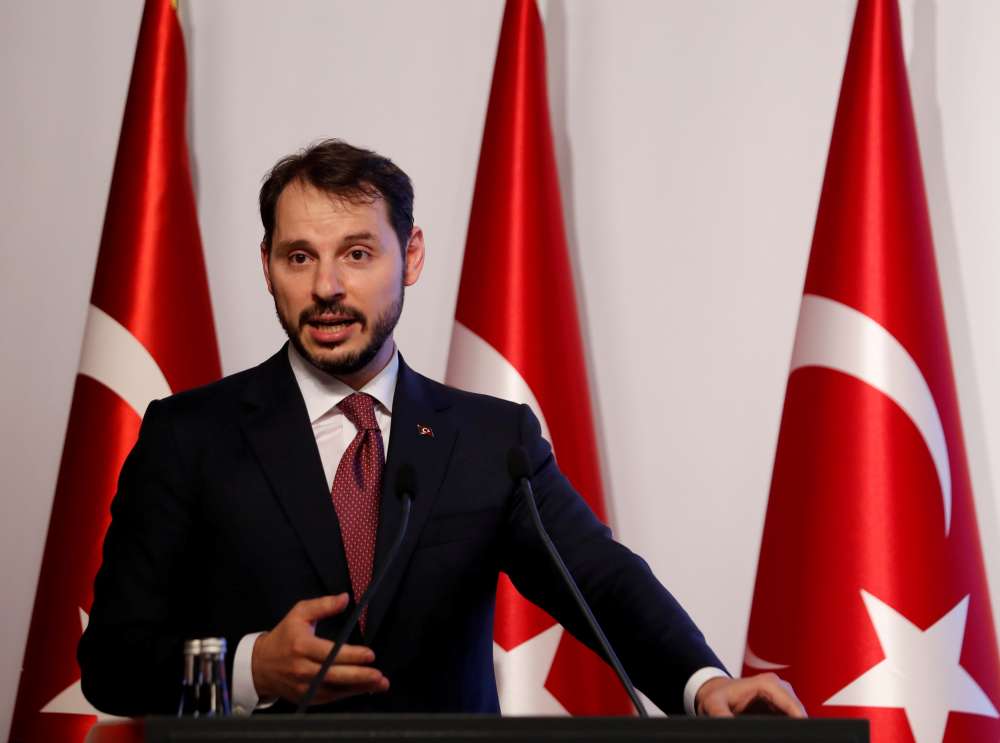 Finance Minister Berat Albayrak assured international investors on Thursday that Turkey would emerge stronger from its currency crisis, insisting that the country’s banks were healthy and strong.

In a conference call with thousands of investors and economists, Albayrak – who is President Tayyip Erdogan’s son-in-law – said Turkey fully understood and recognised all its domestic challenges but was dealing with what he described as a market anomaly.

The Turkish lira hit a record low of 7.24 to the dollar this week, down 40 percent this year, as investors fretted over Erdogan’s influence over monetary policy and a bitter dispute with the United States.

Facing Turkey’s gravest currency crisis since 2001 in his first month in the job, Albayrak has the daunting task of reassuring the investors that the economy is not hostage to political interference.

Albayrak, a 40-year-old former company executive with a doctorate in finance, said Turkey would not hesitate to provide support to the banking sector. The banks were capable of managing the volatility, and there had been no major flow of cash out of deposits lately, he added.

Before he spoke, the Turkish lira strengthened more than 3 percent, despite signs that a rift with the United States is as wide as ever.

However, the currency market’s reaction to his conference call – in which he also said Turkey had no plans to seek help from the International Monetary Fund or impose capital controls to stop money from flowing abroad – was measured.

After he finished speaking, the lira was little changed from beforehand, meaning it remains down around 34 percent against the dollar this year.

Earlier in the day, the currency had shrugged off U.S. comments ruling out the removal of steel tariffs on Turkey even if it frees an American pastor who lies at the centre of the complex feud between Washington and Ankara.

The currency gained some support from the announcement late on Wednesday of a Qatari pledge to invest $15 billion in Turkey.

JP Morgan said moves by Turkish authorities to curb the lira’s fall showed they were committed to stabilising the currency with technical measures such as restricting foreign exchange swaps and cancelling repo auctions to push up the average cost of bank funding.

The White House said on Wednesday that it would not remove steel tariffs on Turkey, appearing to give Ankara little incentive to work for the release of Andrew Brunson, a pastor on trial in Turkey on terrorism charges.

Washington wants the evangelical Christian freed but Turkish officials say the case is a matter for the courts.

President Donald Trump doubled tariffs on Turkish metals exports to the United States last week prompting Ankara, which says it will not bow to threats, to raise tariffs on U.S. cars, alcohol and tobacco by the same amount on Wednesday.

The pastor row is one of several between the NATO allies, including diverging interests in Syria and U.S. objections to Ankara’s ambition to buy Russian defence systems, that have contributed to instability in Turkish financial markets.

Erdogan has repeatedly told Turks to exchange gold and hard currency into lira, saying the country was involved in an economic war with enemies and a presidential official gave a similar message on Thursday.

“We are a fending off this economic coup attempt with the wisdom of the Turkish nation and the leadership of our president,” Fahrettin Altun, the president’s communications director wrote on Twitter.

Erdogan has called for a boycott of U.S. electronic goods and Turkish media have given extensive coverage to anti-U.S. protests, including videos on social media showing Turks apparently burning dollar bills and destroying iPhones.

Turkish Airlines and Turk Telekom have said they will halt advertising in U.S. media.

On Wednesday Erdogan met for more than three hours with Qatar’s Emir, who approved a package of economic projects, investments and deposits worth $15 billion.

Earlier Erdogan doubled tariffs on imports of U.S. passenger cars to 120 percent, alcoholic drinks to 140 percent and leaf tobacco to 60 percent. Tariffs were also doubled on goods such as cosmetics, rice and coal.

The White House called the Turkish response a step in the wrong direction and signalled a hard line.

“Pastor Andrew Brunson is an innocent man held in Turkey & justice demands that he be released. Turkey would do well not to test Trump’s resolve to see Americans who are wrongfully imprisoned in foreign lands returned home to the United States,” Vice President Mike Pence said in a tweet.

On Wednesday, a court rejected an appeal for Brunson to be released from house arrest. An upper court had yet to rule on the appeal, his lawyer told Reuters.