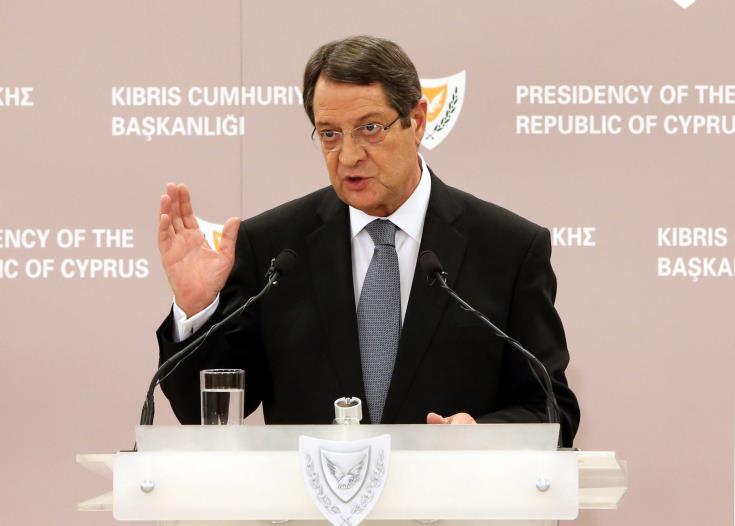 Turkey and Turkish Cypriots should not insist on provisions which would adversely affect the sovereignty and independence of a united Cyprus and would establish a dysfunctional federal state, President Nicos Anastasiades has said.

Receiving on Tuesday the credentials of the Ambassador of the Kingdom of Denmark to the Republic of Cyprus, stationed in Athens, the President said   that our side submitted comprehensive written proposals for each and every one of UNSG`s six-point framework, in Crans Montana, including on a new security architecture that would replace anachronisms and the strategic aspirations of third countries against Cyprus.

As regards the current state of play and SG Envoy`s attempts to agree on terms of reference that would lead to the resumption of the talks, the President said that in response to the encouragement from the Secretary-General for any new input that could prove useful in bringing the sides closer, he proposed that we discuss the decentralization of the exercise of powers, beyond those safeguarding the union and cohesion of the Federal State and functionality of the government, aiming towards a more effective decision-making process, in line with the non-encroachment and subsidiarity principles.

“This would allow us to present a more viable and functional settlement, since on the one hand it would help minimize the disruption in the daily lives of the citizens of both communities and on the other hand it would lead to solving the contested issue of effective participation and the insistence for a Turkish Cypriot positive vote in any federal institution / body / organ”, he added.

The President also referred to the Cyprus economy pointing out that it is not an exaggeration to say that what has been achieved in a period of just a few years, is nothing short of a remarkable recovery, confirming the resilience and strong foundations of Cyprus’ economy and the excellent prospects of its key productive sectors.

He referred to the unemployment rate, the banking system, the investment plans and the reforms, amongst others, in the public administration, the welfare and health care system and in tax administration.

“The positive course of the Cypriot economy, as well as effective actions in the banking sector have strengthened the confidence of investors and of International Credit Rating Agencies, which is reflected by a number of successive upgrades, currently classifying Cyprus at the investment grade”, he said.

Presenting his credentials, the Ambassador said that Cyprus has demonstrated a remarkable economic recovery after a very difficult period during the global economic recession and now the country returned to the international financial markets earlier than expected.

Referring to the Cyprus problem, the Ambassador said that over the past five decades, the division of Cyprus has caused negative consequences for all Cypriots as well as for regional stability and cooperation. He reaffirmed his country`s principled support to the efforts for the resumption of negotiations under UN auspices for a solution to the Cyprus problem based on International Law and in line with the UN Charter and the relevant United Nations resolutions.

“The path to reunification is long and not easy to conclude, but we remain confident that the strong ambitions, skill and courage of the present leadership in Cyprus will eventually prevail and lead to a solution that will bring stability and prosperity to a reunited Cyprus for generations to come”, he said.

The Ambassador also spoke of the challenges Cyprus faces as regards migration. He said that irregular migrants and refugees should be assisted as close to their countries as possible, adding that in the EU, we can further this by setting a new strategic goal based on the concept of mandatory solidarity, which could cover a range of different measures that each member state could choose from, thereby contributing to the solution of the problem.

By In Cyprus
Previous articleWHO issues warning as measles infects 34,000 in Europe this year
Next articlePolice looking for 31 year old missing woman (photo)