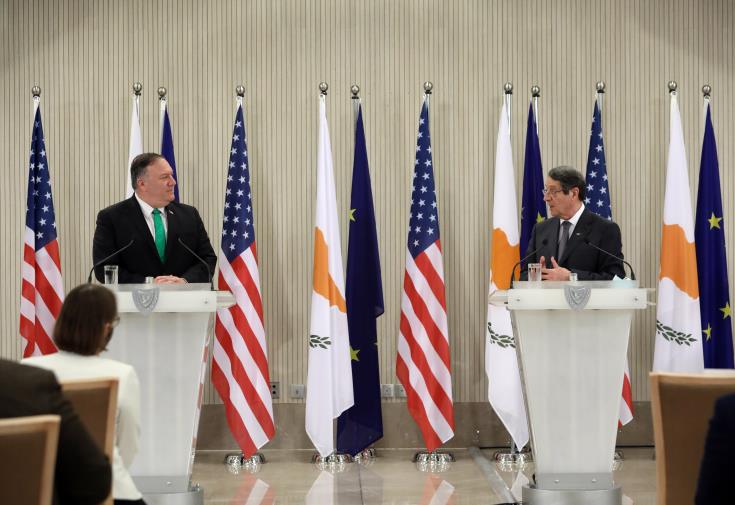 Turkey said early on Monday that the United States needed to return to a neutral stance on Cyprus, after Washington and Nicosia signed a memorandum of understanding to create a training centre.

Secretary of State Mike Pompeo said earlier this month that the United States would lift a 33-year arms embargo on EU-member Cyprus and deepen its security cooperation with Nicosia.

During a visit to Cyprus, Pompeo said on Saturday that Washington remained “deeply concerned” about Turkey’s actions in the eastern Mediterranean, where it is at a standoff with Greece and Cyprus over maritime areas thought to be rich in natural gas.

“The memorandum of understanding will not serve peace and stability in the eastern Mediterranean and will damage the solution of the Cyprus problem,” Turkey’s Foreign Ministry said.

It added that the recent steps by the United States increased the tensions in the eastern Mediterranean.

“We invite the U.S. to return to the neutrality policy it traditionally follows on the island of Cyprus and to contribute to the efforts aimed at the solution of the Cyprus issue,” the ministry said.

The eastern Mediterranean island was split in a Turkish invasion in 1974 triggered by a brief Greek-inspired coup. A ‘state’ in the Turkish-held northern part is recognised only by Ankara.

Turkey has sent two survey vessels to separate areas in the region, drawing strong protests from both Cyprus and Greece which say Ankara is operating provocatively on their respective continental shelves. Turkey says it has a legitimate claim over the area.

There is no agreement between Greece and Turkey delimiting their continental shelves, while Turkey disputes any claims by Cyprus, with which it has no diplomatic relations.