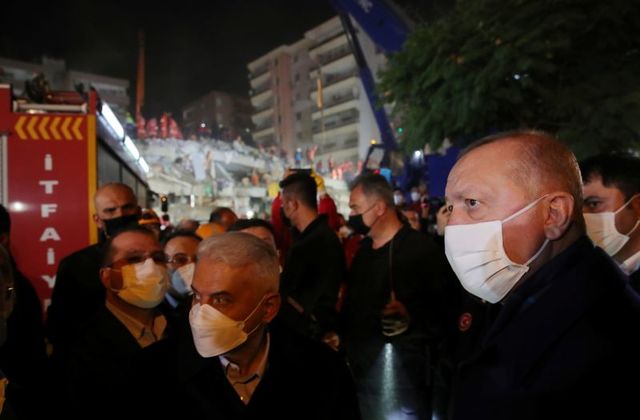 The death toll in Izmir from a seven magnitude quake that hit the Turkish coastal city on Friday rose to 49, as crews are still searching for dozens trapped under the rubble of apartment buildings, more than two days after the jolt.

900 people have been injured. At least 15 are in critical condition.

Eight hundred and twelve aftershocks have been recorded.

Turkish President Tayip Erdogan visited the affected last night, saying that rescue efforts will continue and assuring that all homes will be rebuilt and compensation given.

Three thousand tents have been have been set up to house the homeless, while schools will remain closed in Izmir this week.

Erdogan noted that Greek Prime Minister Kyriakos Mitsotakis was among the leaders who called to express support and offer assistance.

By Constantinos Tsintas
Previous articleFrance’s Macron to Muslims: I hear your anger, but won’t accept violence
Next articleShowers over the next week as temperatures drop