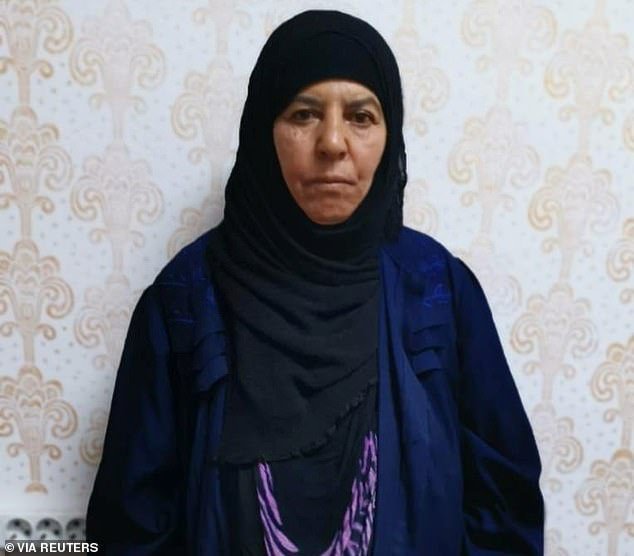 Turkey captured the sister of dead Islamic State leader Abu Bakr al-Baghdadi on Monday in the northern Syrian town of Azaz, a senior Turkish official told Reuters, and is interrogating her husband and daughter-in-law who were also detained.

Rasmiya Awad, 65, was detained in a raid near Azaz, the official said, referring to a Turkish-controlled Syrian town near the border. When captured, she was also accompanied by five children.

“We hope to gather a trove of intelligence from Baghdadi´s sister on the inner workings of ISIS,” the official said.

Little independent information is available on Baghdadi’s sister and Reuters was not immediately able to verify if the captured individual was her.

Baghdadi killed himself last month when cornered in a tunnel during a raid by U.S. special forces in northwestern Syria. Islamic State, in an audio tape posted online on Thursday, confirmed that its leader had died and vowed revenge against the United States.

“The arrest of al-Baghdadi’s sister is yet another example of the success of our counter-terrorism operations,” Fahrettin Altun wrote on Twitter early on Tuesday.

“Much dark propaganda against Turkey has been circulating to raise doubts about our resolve against Daesh,” he wrote, using another name for Islamic State.

“Our strong counter-terrorism cooperation with like-minded partners can never be questioned.”

Baghdadi had risen from obscurity to lead the ultra-hardline group and declare himself “caliph” of all Muslims, holding sway over huge areas of Iraq and Syria from 2014-2017 before Islamic State’s control was wrested away by U.S.-led coalition forces including Iraqis and Syrian Kurds.

The group, also known as ISIS, said a successor to Baghdadi identified as Abu Ibrahim al-Hashemi al-Quraishi had been appointed. A senior U.S. official last week said Washington was looking at the new leader to determine where he came from.

World leaders welcomed his death, but they and security experts warned that the group, which carried out atrocities against religious minorities and horrified most Muslims, remained a security threat in Syria and beyond.

By Andreas Nicolaides
Previous articleClear weather on Tuesday, above average temperatures on the weekend
Next articleCyprus reiterates support to Rome Statute at UN discussion of ICC report

Though not big spenders, Cypriots represent Greece's eighth biggest tourist market and account for some €465 m in tourism revenue or 2.6% of the...
Read more
Local

Police have made a fourth arrest in connection with 72 kilos of cannabis that was discovered in a Limassol warehouse last week. Three men aged...
Read more
World

Civil unrest flared and curfews were imposed in several major U.S. cities on Saturday as demonstrators took to the streets to vent outrage at...
Read more

Civil unrest flared and curfews were imposed in several major U.S. cities on Saturday as demonstrators took to the streets to vent outrage at...
Read more
World

U.S. President Donald Trump on Saturday said demonstrators protesting the death of a black man who died after a white police officer knelt on...
Read more