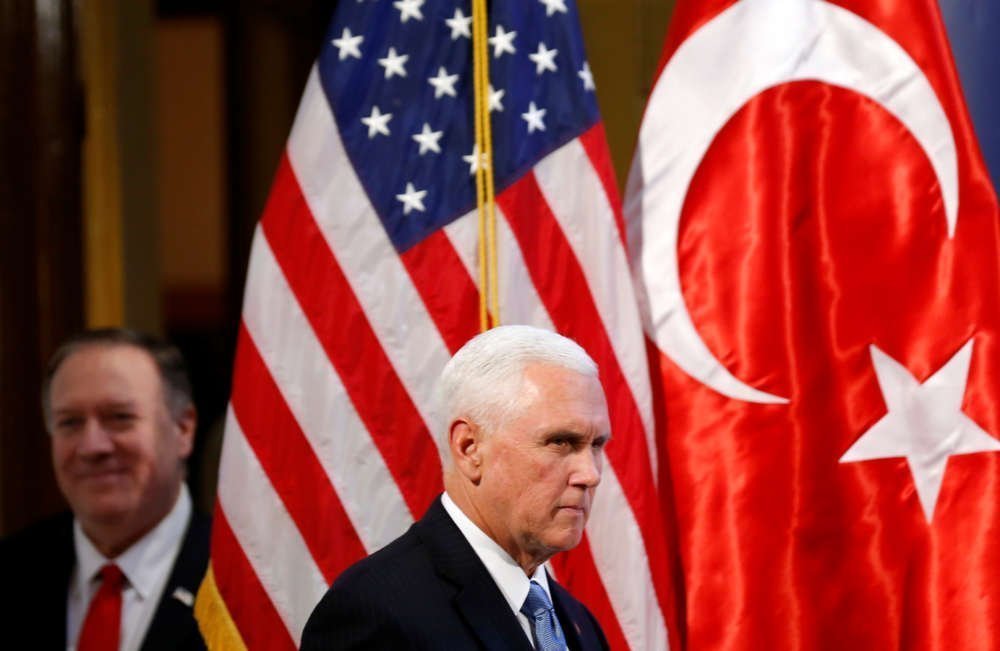 Turkey agreed on Thursday to pause its offensive in Syria for five days to let Kurdish forces withdraw from a “safe zone” Ankara had sought to capture, in a deal hailed by the Trump administration and cast by Turkey as a complete victory.

The truce was announced by U.S. Vice President Mike Pence after talks in Ankara with Turkey‘s President Tayyip Erdogan, and was praised by President Donald Trump, who said it would save “millions of lives”.

But if implemented it would achieve all the main objectives Turkey announced when it launched its assault on Oct. 9: control of a strip of Syria more than 30 km (20 miles) deep, with the Kurdish militia, once U.S. allies, obliged to pull out.

It was also unclear if the Kurdish-led Syrian Democratic Forces (SDF) would fully comply with the agreement, which would leave Turkish forces in charge of a swathe of territory that the Kurds once held with U.S. military support.

SDF commander Mazloum Kobani told Ronahi TV the group would accept the ceasefire agreement with Turkey in northern Syria but said it was limited to the border areas running between the towns of Ras al-Ain and Tal Abyad.

Republican and Democratic senators accused Trump of having betrayed the Kurdish allies who were vital in fighting Islamic State militants, of brushing aside the humanitarian costs of Turkey‘s invasion and of being outwitted by Ankara.

“The safe zone will be primarily enforced by the Turkish Armed Forces,” a joint U.S.-Turkish statement released after the talks said.

U.S. senators who have criticized the Trump administration for failing to prevent the Turkish assault in the first place said they would press ahead with legislation to impose sanctions against Turkey despite the ceasefire announcement.

A Turkish official told Reuters that Ankara got “exactly what we wanted” from the talks with the United States. Turkish Foreign Minister Mevlut Cavusoglu described it as a pause, solely to allow the Kurdish fighters to withdraw.

Kurdish fighters would be forced to give up their heavy weapons and their positions would be destroyed, Cavusoglu said. He declined to call the agreement a “ceasefire”, saying ceasefires could be agreed only by legitimate sides, and not by a Kurdish militia that Turkey considers a terrorist group.

“When the terrorist elements completely leave the safe zone, we can stop the operation,” Cavusoglu said.

Washington and Ankara will cooperate to handle Islamic State (IS) fighters and their families held in prisons and camps, the joint statement said, addressing concerns that the militant group might reconstitute and again attack Western targets.

Pence said Washington had already been in contact with the Kurdish-led SDF, which had agreed to withdraw and were already pulling out.

However, the Kurdish position was not clear. Speaking to Ronahi TV, SDF commander Kobani said the agreement is “just the beginning” and will not achieve Turkey‘s goals.

Aldar Xelil, a leading Syrian Kurdish politician, told Al Arabiya television that the Kurds would abide by the ceasefire but would defend themselves.

Pence said that once the pause became permanent, Washington would go ahead with its own plans to withdraw its forces from northern Syria, which had partnered with the Kurds to fight against Islamic State. However, there were no signs that U.S. forces had ceased their withdrawal, a U.S. official said.

“Thank you to Erdogan,” Trump said. “Millions of lives will be saved!”

“Today the United States and Turkey have agreed to a ceasefire in Syria,” Pence told a news conference after more than four hours of talks at the presidential palace in Ankara.

The deal struck with Erdogan also provided for Turkey not to engage in military operations in the flashpoint Syrian border town of Kobani, Pence said. Cavusoglu said Turkey had given no commitments about Kobani.

U.S. Special Representative for Syria Engagement James Jeffrey said the agreement covered central northeastern Syria and Turkey was in separate talks with the Russians and the Syrians about other parts of the region.

“We have a very (convoluted) situation with Russian, Syrian Army, Turkish, American, SDF and some Daesh (Islamic State) elements all floating around in a very wild way,” he told pool reporters as Secretary of State Mike Pompeo flew to Tel Aviv from Ankara.

Senator Mitt Romney, a Republican, said the agreement “is far from a victory” and demanded the administration explain what will happen to the Kurds, what will be the future U.S. role in the region and why Turkey “will face no apparent consequences.”

“What President Trump agreed to today is a capitulation to Turkey at the expense of our Kurdish allies,” Senator Maggie Hassan, a Democrat, said in a statement, saying “the agreement lets Turkey off the hook for slaughtering innocent civilians.”

The Turkish assault has created a new humanitarian crisis in Syria with 200,000 civilians taking flight, a security alert over thousands of Islamic State fighters potentially abandoned in Kurdish jails, and a political maelstrom at home for Trump.

The Turkish assault began on Oct. 9 after Trump moved U.S. troops out of the way after an Oct. 6 phone call with Erdogan. Trump announced sanctions on Turkey on Monday, after the assault began, but critics said these were too little, too late.

Pence said the sanctions would be lifted once the ceasefire became permanent.

If successful, the deal could smooth over a major rift between Washington and Turkey, the only Muslim NATO ally.

But the U.S. withdrawal also leaves U.S. adversaries Russia and Iran in a far stronger position in Syria. The Kurds responded to the U.S. withdrawal by effectively switching allegiances and inviting Syrian government forces, backed by Moscow and Tehran, into towns and cities in areas they control.

“The United States essentially agreed to everything Turkey was seeking: a green light to invade, the creation of a huge ‘safe zone’ that Kurdish fighters have to leave, and the end of Kurdish autonomy,” said Phil Gordon, an Obama administration official now at the Council on Foreign Relations.

“Deeply damaging to U.S. credibility, not just because Trump betrayed the Kurds but because it once again makes Trump look like a paper tiger: after all his big threats to Turkey he gave it everything it wanted for almost nothing in return,” Gordon said.

The two young and talented chefs, Savvas Savva and Andreas Constantinou, take us on a journey through the cuisines of the world, through pop-up...
Read more
World

Meghan, the Duchess of Sussex, felt "unprotected" by the British royal family while she was pregnant with her son Archie, according to London High...
Read more
Local

Six men have been sentenced to a total of 20 years for their part in supplying and exporting stolen vehicles from the UK to...
Read more
Paphos

The Paphos Hotel has reopened its gates to the public, following renovations to rooms, suites, the Aeras restaurant and public areas. The renovation was...
Read more
Local

By Demetra Landou Hotels which have or will open in the coming days mostly count on Cypriot residents for business this year. However, these are...
Read more

Meghan, the Duchess of Sussex, felt "unprotected" by the British royal family while she was pregnant with her son Archie, according to London High...
Read more
World

A Turkish court on Thursday heard a case aimed at converting Istanbul's sixth century Hagia Sophia back into a mosque and will announce its...
Read more
World

The British government will effectively ditch its air bridge plans and simply end the coronavirus quarantine rules for those arriving from 75 countries so...
Read more
World