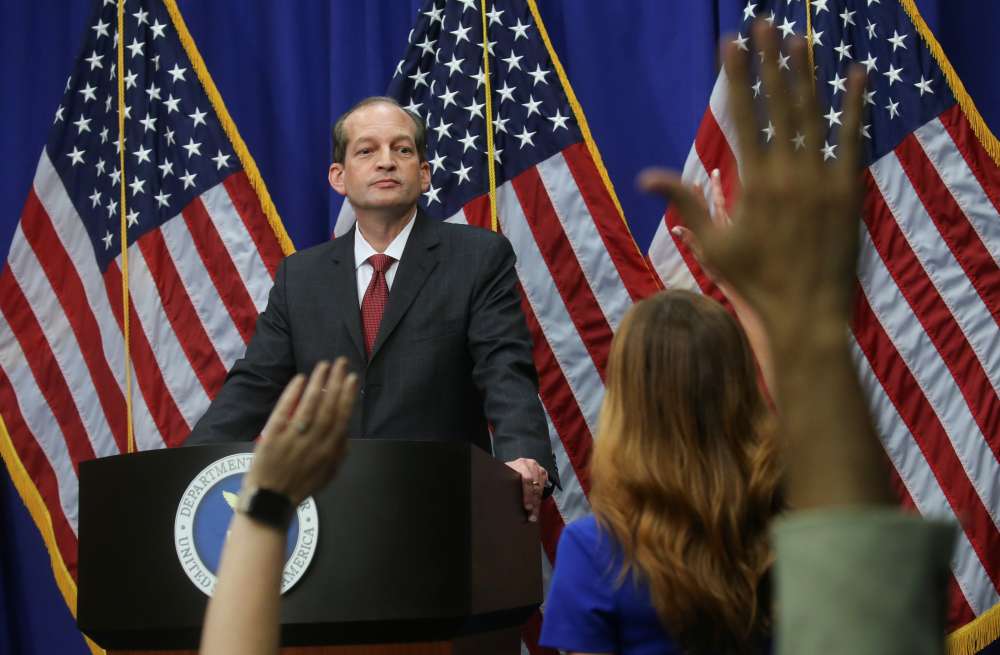 U.S. Labour Secretary Alexander Acosta on Wednesday dismissed calls for his resignation and defended a controversial non-prosecution agreement he approved more than 10 years ago with financier Jeffrey Epstein, who has now been charged with sex trafficking in underage girls.

Acosta, who was a top U.S. prosecutor in Florida at the time, has been the target of criticism that his office approved a lenient deal for Epstein, which has received renewed attention in the wake of new charges filed against Epstein this week. Instead of prosecuting Epstein on a federal level, Acosta’s office agreed to have the billionaire ink a plea deal with state prosecutors that resulted in a lax sentence.

Acosta disputed that his office let Epstein get off easily and argued that, had his team not stepped in, Epstein would have only faced one charge from state prosecutors and would have avoided any jail time. He said that at the time, a trial would have been difficult because the witnesses would have faced intense scrutiny from a team of defense attorneys.

“Without the work of our prosecutors, Epstein would have gotten away with just that state charge” and avoided jail time, Acosta said. “He was and is a sexual predator.”

Ultimately, Epstein served time in jail but was granted daily work release, allowing him to leave each morning and return in the evening. Acosta said he was not aware Epstein would be able to qualify for work release.

“When we proceeded, the expectation was it would be an 18-month sentence. … So this work release was complete BS,” Acosta said.

Acosta is the latest in a series of President Donald Trump’s cabinet secretaries to become embroiled in controversy. Trump has frequently provided backing to his embattled aides but then abandoned them weeks later, pushing them to resign after previously vocalizing support.

Acosta would not say if he would make the same decision regarding Epstein today.

In the intervening decade, the #MeToo movement, which was born in the aftermath of an uprising of women in the wake of Trump’s election and spurred by accusations against powerful men such as movie mogul Harvey Weinstein, has caused a shift in the way women who make accusations are viewed in public opinion.

“We live in a different world; today’s world does not allow some of the victim shaming that would have taken place at trial 12 years ago,” Acosta said. “I don’t think we can say, take a case that is this old and fully know how it would play out today.”

Acosta gave no indication he would resign after days of calls by Democrats for him to step down and said he has Trump’s support.

“My relationship with the president is outstanding,” Acosta said.

Democrats remained unsatisfied with Acosta’s explanation of his role in the Epstein case.

“This may have been okay for his audience of one, but it’s not good enough for the American people. Acosta needs to resign or be fired now,” U.S. Senator Kirsten Gillibrand, a Democratic presidential candidate, wrote on Twitter.

The labour secretary has also been the subject of growing criticism from conservative corners of the Republican Party, according to conservative strategists who asked to speak anonymously to provide frank descriptions of conversations with the White House. Conservatives are unhappy with Acosta’s continued pursuit of employment cases that began under former President Barack Obama and his willingness to work with labor unions.

The Epstein deal came under fresh scrutiny after a Miami Herald investigation shed new light on it, spurring federal prosecutors in New York this week to file new sex trafficking charges against Epstein.

The federal 2007 non-prosecution agreement in Florida, where Acosta was the U.S. attorney in Miami, allowed Epstein to reach a plea deal in 2008 on a lesser prostitution offense and serve 13 months in a county jail, with leave during the day. He also had to register as a sex offender. A judge earlier this year ruled the deal violated a federal law by not letting more than 30 identified victims know of the deal so they would have a chance to oppose it.

On Monday, the U.S. attorney in Manhattan said it was not bound by the 2008 plea deal and accused Epstein of luring dozens of girls, some as young as 14, to his homes in New York and Florida and coercing them into sex acts. Epstein remains in jail while he awaits a bond hearing scheduled for Monday.

The U.S. Department of Justice’s Office of Professional Responsibility, which investigates alleged misconduct by department lawyers, is reviewing how Acosta and the other prosecutors in the U.S. Attorney’s Office for the Southern District of Florida handled the Epstein deal.

Acosta said he would comply with any investigation.

Alan Dershowitz, a lawyer who defended Epstein in the Florida case, defended the deal in a televised interview with CBS on Wednesday: “The feds thought it was the best they could do.”

Lawyer Brad Edwards, who represented 13 women who have accused Epstein of sex crimes, separately told CBS that more potential victims have come forward since Monday and he estimates there are “well in excess of 50.” He said the government had a strong case against Epstein in Florida and it was unclear why Acosta struck the deal without notifying victims.

“He has a lot of explaining to do,” Edwards said.