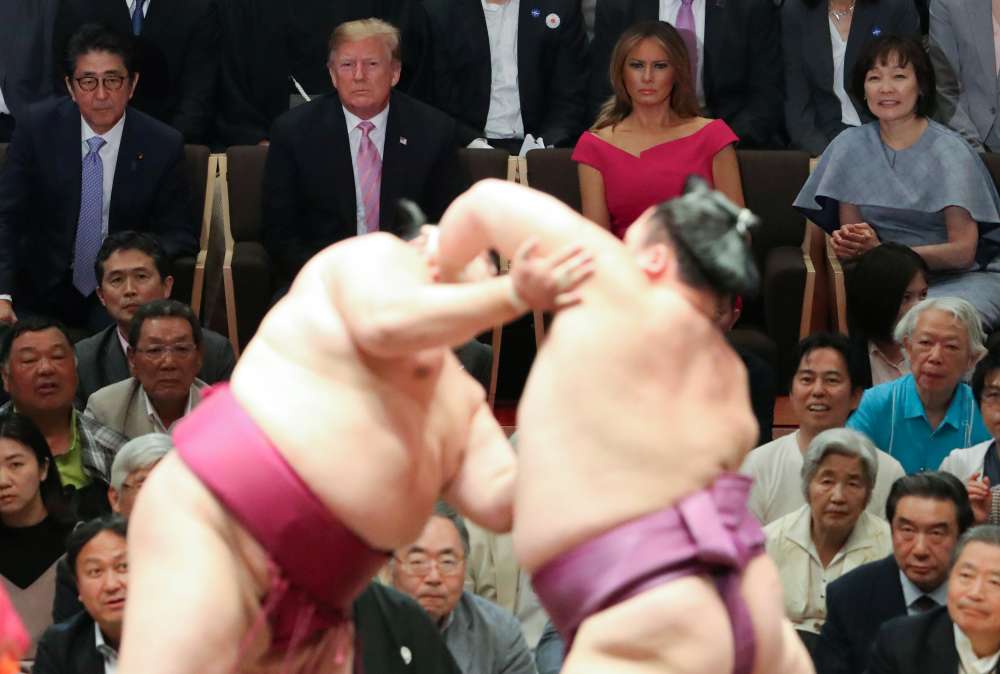 U.S. President Donald Trump, on a four-day visit to Japan, spent what he said was “an incredible evening” watching the Japanese national sport of sumo on Sunday, although the visit left some wrestling fans grumbling over tight security.

Answering a request from Trump, who said last month that he’d always found the sport – where nearly naked wrestlers grapple on a raised sand ring – “fascinating,” sumo officials prepared for the unprecedented visit as the climax to a day of bonding between Trump and Japanese Prime Minister Shinzo Abe over hamburgers and golf.

“I’ve always wanted to see sumo wrestling, so that was really great,” Trump said at the start of a dinner with Abe, accompanied by his wife, Melania, and Abe’s wife Akie, just after the match.

“That was an incredible evening.”

About 1,000 of the 11,000 seats in the legendary Kokugikan sumo venue, including some of the most expensive, were reserved for Trump, Abe and their security teams.

U.S. and Japanese secret security agents paced through the venue hours before Trump’s arrival and lined the hallways that take the wrestlers to the ring, while ordinary fans had to pass through metal detectors and take a sip of any beverages they brought with them in front of security.

Other departures from tradition had prompted complaints ahead of time, including the provision of armchairs for Trump and his wife Melania instead of the “zabuton” floor cushions customarily used by ringside spectators and a ban on the sale of bottled beer and hot tea.

The match was also paused for Trump and Abe’s arrival, just before the bout of tournament winner Asanoyama, a rising Japanese star.

“It was too bad that the match was halted to allow Trump to enter, and also that the usual drinks service was different,” said Hisao Sakai, 66, a long-time sumo aficionado.

“But it was needed for security, so there’s no help for it.”

Trump presented the 25-year-old Asanoyama with a custom-made trophy called the United States President’s Cup – a set of wooden stairs fitted to the side of the raised sumo ring to make it easy for him to ascend for the prize-giving.

Other fans took the changes in good part, waving to Trump as he entered and pulling out their phones to take photos.

“It was amazing to see the president here,” said Midori Yoshida, 27. “I wish more Japanese young people would take an interest in sumo.”

Trump praised the wrestlers as “great athletes” and said he hoped the trophy, which was topped with a bald eagle, the U.S. national bird, would be used for hundreds of years to come. It will be presented to the winner at each May tournament from now on, NHK national television said.

Trump was not the first foreign dignitary to present a special trophy to a sumo tournament winner.

Former French President Jacques Chirac, who was such a big fan he even named his pet dog “Sumo,” created the President of the Republic of France Cup and presented the trophy to the winning wrestler in 2000. It was presented every year until Chirac left office in 2007