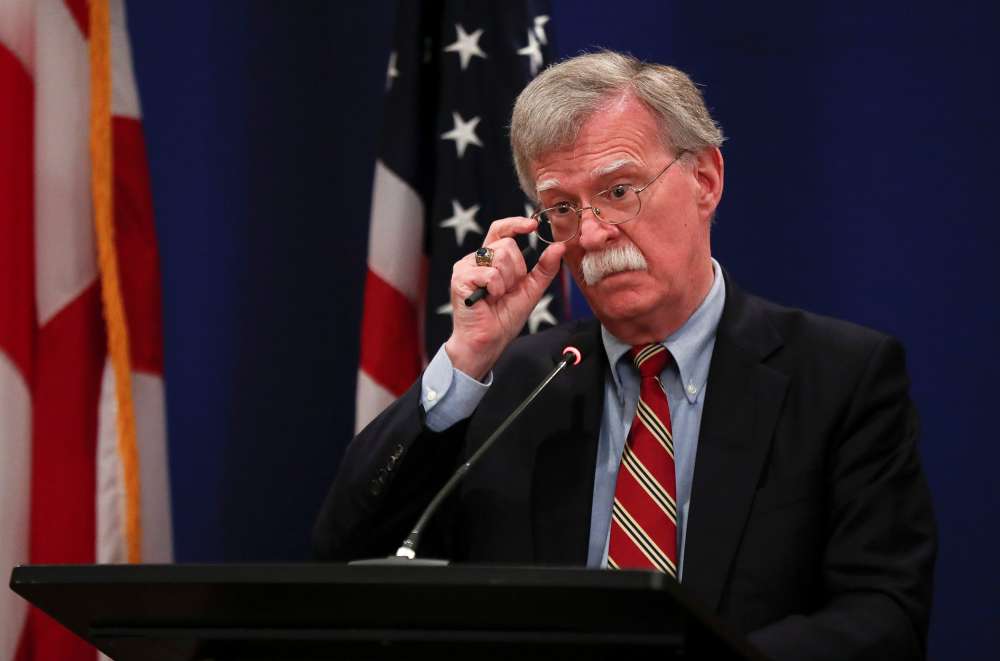 U.S. President Donald Trump told a then-top aide in August he wanted to freeze security aid to Ukraine until officials there helped with investigations into Democrats, including former Vice President Joe Biden, the New York Times reported on Sunday.

Trump’s statement was described in an unpublished manuscript by former White House national security adviser John Bolton, the Times said in a report that could raise pressure on Republicans to call Bolton as a witness in Trump’s Senate impeachment trial.

The report, which did not quote the manuscript but cited multiple people describing Bolton’s account, may undercut a key element of Trump’s defence: that there was no quid pro quo when he asked Ukrainian President Volodomyr Zelenskiy to investigate Biden and his son Hunter Biden in a July phone call.

Biden is a leading contender for the Democratic nomination to oppose Trump in the Nov. 3 election. His son worked for a Ukrainian energy firm while Biden was vice president.

In a statement, an attorney for Bolton suggested that the Times’ account was accurate and said he had submitted Bolton’s book manuscript to the National Security Council on Dec. 30, a standard security review for classified information.

“It is clear, regrettably, from The New York Times article published today that the prepublication review process has been corrupted and that information has been disclosed by persons other than those properly involved in reviewing the manuscript,” the attorney, Charles Cooper, said.

The report drew Democratic demands that the Republican-led Senate, which is conducting a trial on whether to remove Trump from office after his Dec. 18 impeachment by the Democratic-led House of Representatives, call Bolton as a witness.

Democrats need to win over at least four Senate Republicans to approve the calling of witnesses. Bolton said this month he was willing to testify in the trial if a Senate subpoena was issued.

Lawyers for Trump are scheduled on Monday to resume their defence in the impeachment trial stemming from his dealings with Ukraine. A showdown vote on calling witnesses could loom later in the week.

Trump has denied wrongdoing and calls the impeachment process a sham.

“I never told John Bolton that the aid to Ukraine was tied to investigations into Democrats, including the Bidens,” Trump said in a Twitter post. “In fact, he never complained about this at the time of his very public termination. If John Bolton said this, it was only to sell a book.”

The White House, which with Senate Republican leaders has resisted calling witnesses, did not immediately respond to a request for comment about the New York Times report, nor did Jay Sekulow, who is helping lead the Republican president’s defence.

‘NO DEFENSIBLE REASON TO WAIT’

“There can be no doubt now that Mr. Bolton directly contradicts the heart of the President’s defence and therefore must be called as a witness at the impeachment trial of President Trump,” the seven Democratic House “managers” prosecuting the case against Trump in the Senate said in a statement.

“There is no defensible reason to wait until his book is published, when the information he has to offer is critical to the most important decision Senators must now make — whether to convict the President of impeachable offences,” it added.

Democrats have said they are eager to hear testimony by Bolton, who was involved, as his own lawyer previously said, in “many relevant meetings and conversations” involving issues at the heart of Trump’s impeachment.

Bolton left his post in September after disagreements with the president. Trump said he fired him. Bolton said he quit.

“It’s clearly damaging,“ Jonathan Turley, a professor at George Washington University Law School, who was the only witness called by Republicans in the House impeachment proceedings, said of the Times report. “It will fuel demands to hear from Bolton and other witnesses.”

But he said the timing – just before the first full day of argument by the White House team – fueled suspicion it was part of an organized effort and that the senators may not react as the leakers intended.

While the Senate is highly unlikely to remove Trump from office, he is seeking to limit political damage to his re-election bid.

The House impeached Trump on charges of abusing the powers of his office by asking Ukraine to investigate Biden and of obstructing a congressional inquiry into his conduct.

Trump’s defence argued neither impeachment charge constituted a crime or impeachable offence, that he was within his rights as president to make decisions about foreign policy and what information to give Congress, and that the House pursued a flawed and one-sided process before impeaching him.

According to the New York Times, Bolton spoke to Trump in August and raised the $391 million in congressionally approved aid to Ukraine for its war in the country’s east against Russian-backed separatists.

Officials had frozen the aid, and a deadline was looming to begin sending it, Bolton noted, according to the newspaper.

Trump had previously rebuffed senior U.S. officials who had called for the aid to be restored, the newspaper said, airing his long-standing grievances about Ukraine, which mixed legitimate efforts by some Ukrainians to back his Democratic 2016 opponent, Hillary Clinton, with unsupported accusations and outright conspiracy theories about the country.

The newspaper reported that the president’s lawyer, Rudy Giuliani, had also spent months stoking the president’s paranoia about the U.S. ambassador to Ukraine at the time, Marie Yovanovitch, alleging that she was openly anti-Trump and should be dismissed.

In his August 2019 discussion with Bolton, the newspaper said Trump appeared focused on the theories Giuliani had shared with him and had replied to Bolton’s question that he preferred sending no assistance to Ukraine until officials had turned over all materials they had about the investigation that related to Biden and supporters of Clinton in Ukraine.