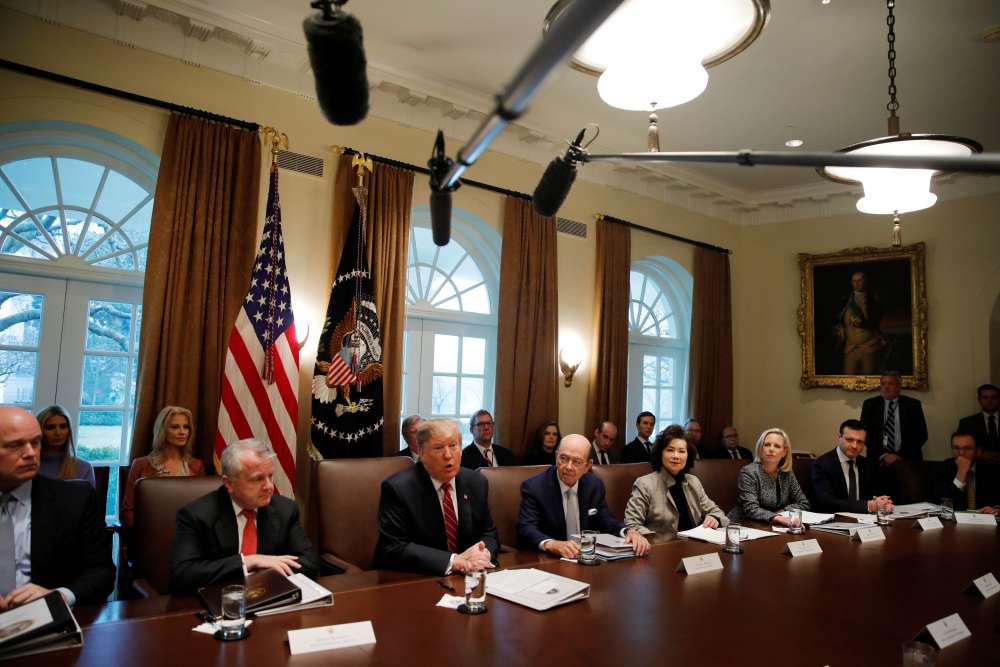 President Donald Trump vowed on Thursday to declare a national emergency in an attempt to fund his U.S.-Mexico border wall without congressional approval, a step likely to plunge him into a battle with Congress over constitutional powers.

Conceding defeat in his earlier demand that Congress provide him with $5.7 billion in wall money, Trump agreed to sign a government-funding bill that lacks money for his wall, but prevents another damaging government shutdown.

The bill, passed overwhelmingly by both the U.S. Senate and House of Representatives on Thursday, contains money for fencing and other forms of border security. But it ignores the wall, which Trump in his 2016 campaign promised Mexico would pay for, arguing it is needed to check illegal immigration and drugs.

The bill was expected to go to the White House on Friday for the president’s signature before he flies to his private Mar-a-Lago golf club in Florida for a holiday weekend break.

“President Trump will sign the government funding bill, and as he has stated before, he will also take other executive action – including a national emergency,” White House spokeswoman Sarah Sanders said.

The top Democrat in Congress denounced the president’s move. Asked by reporters if she would file a legal challenge to an emergency declaration, House of Representatives Speaker Nancy Pelosi said: “I may, that’s an option.”

Top Senate Democrat Chuck Schumer accused Trump of a “gross abuse of the power of the presidency.”

Republican Senate Majority Leader Mitch McConnell said he would support Trump on the emergency. Earlier this month, McConnell had cautioned Trump that declaring an emergency could divide Senate Republicans, the Washington Post reported.

An emergency declaration could infringe on Congress’ authority to make major decisions about taxpayer funds, a fundamental check and balance spelled out in the Constitution.

For weeks, as the president’s wall-funding demand to Congress went nowhere, even after a historic 35-day partial government shutdown, the White House explored whether an emergency declaration could be invoked to redirect taxpayer funds committed by Congress for other purposes toward the wall.

The national emergency strategy, expected to be declared by Trump on Friday, was already dividing Republicans.

Senator Susan Collins, a Republican moderate, said in a statement: “Declaring a national emergency for this purpose would be a mistake on the part of the president.”

But Representative Mark Meadows, chairman of a right-wing Republican faction in the House, said: “At this point, President Trump must look at taking executive action – and I will stand with him to protect our sovereign borders.”

Congressional aides said House Democrats would take various steps to try to block Trump’s emergency, possibly including a lawsuit. The short-term result of that could be a court injunction blocking any diversion of funds while judges weigh the matter, possibly leading to a Supreme Court decision.

The funds would cover just part of the estimated $23 billion cost of the wall promised by Trump along the 2,000-mile (3,200-km) border with Mexico.

A source said lawyers from the White House and other agencies had vetted the figures and believed they would withstand a legal challenge.

The Republican-led Senate passed the government funding bill by a vote of 83-16 and the Democratic-led House by a vote of 300-128, with 86 House Republicans voting in favour. The measure would provide more than $300 billion to fund the Department of Homeland Security and other agencies through Sept. 30, the end of the current fiscal year.

It also includes $1.37 billion in new money to help build 55 miles (88.5 km) of new physical border barriers. That is the same level of funding Congress appropriated for border security measures last year, including barriers, but not concrete walls.

Funding for those agencies was due to expire on Friday, which would trigger another partial federal shutdown on Saturday morning if Trump unexpectedly refuses to sign the bill.

Some of Trump’s fellow Republicans have warned him that declaring a national emergency could set a dangerous precedent, opening the door for a future Democratic president to circumvent Congress and declare emergencies on perhaps climate change, gun control or healthcare insurance.

Pelosi said: “If the president can declare an emergency on something that he has created as an emergency – an illusion that he wants to convey – just think of what a president with different values can present to the American people.”

Democratic Senator Ron Wyden said: “I will pull out all the stops to stop this horrendous, bizarre idea. As people get a chance to sort through what the implications really are, we will have strong bipartisan support for opposing this. … We are the appropriators, not the president.”