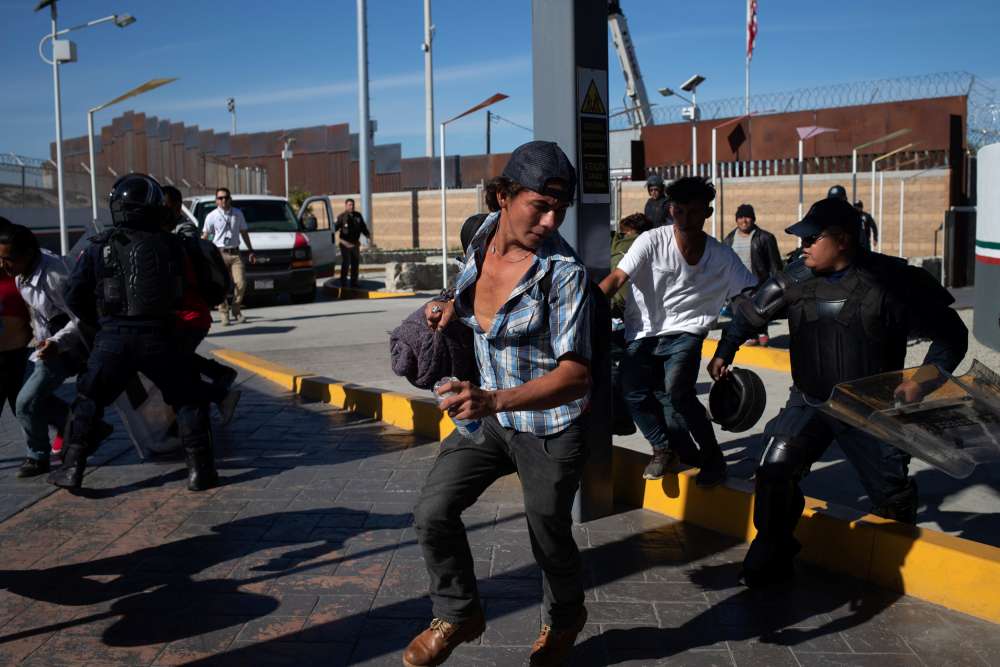 U.S. President Donald Trump said on Monday that Mexico should send migrants seeking asylum in the United States back to their home countries, a day after U.S. authorities shut the country’s busiest southern border crossing and fired tear gas into the crowd.

U.S. officials on Sunday reopened the crossing at the San Ysidro port of entry between San Diego and Tijuana, the most heavily trafficked land border in the Western Hemisphere after shutting it down for several hours.

Trump has vowed the asylum seekers would not easily enter the country and on Monday threatened again to shut down the U.S.-Mexico border, which stretches 3,200 km.

The president repeated his call on Congress to fund his long-promised border wall as U.S. lawmakers return to Washington on Monday after the U.S. Thanksgiving holiday break with federal government funding set to expire on Dec. 7. He has repeatedly threatened to shut down the federal government unless the wall is funded.

The showdown on Sunday took place at part of the border where there is already a physical barrier.

“Mexico should move the flag waving Migrants, many of whom are stone cold criminals, back to their countries. Do it by plane, do it by bus, do it anyway you want, but they are NOT coming into the U.S.A. We will close the Border permanently if need be. Congress, fund the WALL!” Trump tweeted.

Hundreds of caravan members including women and children protested peacefully on Sunday with chants of “We aren’t criminals! We are hard workers.” As they neared the U.S. border, they were stopped by Mexican authorities, who told them to wait for permission.

The migrants who are mostly Honduran are fleeing poverty and violence and have said they would wait in Tijuana until they could request asylum in the United States.

For weeks before the Nov. 6 congressional elections, Trump raised alarm about the caravan of Central American migrants headed for the United States and ordered some 5,800 U.S. troops to the border to support U.S. Customs and Border Protection.

Trump has just a few weeks left to push his fellow Republicans who control both chambers of Congress to make good on the wall before Democrats take control of the U.S. House of Representatives in January following their election gains.

Democrats have urged more comprehensive immigration reform in addition to additional border security, but have fiercely opposed the wall.

U.S. and Mexican negotiators on Sunday also discussed a plan to keep the migrants in Mexico while their asylum claims are heard. Asylum seekers typically announce their intention at U.S. ports of entry or after crossing the border illegally.

By In Cyprus
Previous articleMan fined €1400 for duty free cigarettes
Next articleEnergy Ministry: One bid submitted for plot 7