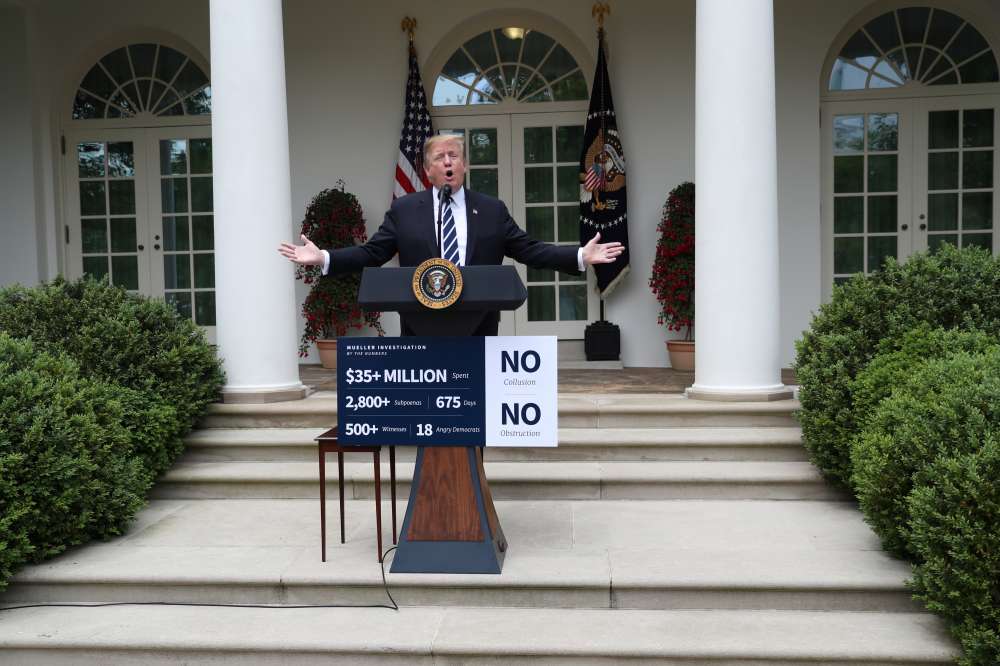 President Donald Trump on Wednesday abruptly cut short a White House meeting with Democratic lawmakers on infrastructure, then ripped into them over House Speaker Nancy Pelosi’s accusation that he is engaged in a cover-up and asserted that he could not work with them unless they dropped multiple investigations.

Unleashing a familiar litany of gripes about Special Counsel Robert Mueller’s Russia probe and the follow-up congressional inquiries that he has been stonewalling, Trump also complained that Democrats had met to discuss whether to impeach him – or, as he called it, “the I-word.”

The rupture bodes ill for any possible cooperation between the president and the Democrats who control the House of Representatives on legislation on infrastructure or other matters as Trump seeks re-election in 2020, signaling deepening political gridlock in Washington.

Pelosi, the top congressional Democrat, did not back down afterward and pointedly mentioned the possibility of impeachment, the U.S. Constitution’s process for the House and Senate to remove a president from office.

“The fact is, in plain sight in the public domain, this president is obstructing justice and he’s engaged in a cover-up – and that could be an impeachable offence,” Pelosi said in an event at the Center for American Progress, a liberal Washington policy advocacy group.

The president is stonewalling congressional investigations by ignoring subpoenas, refusing to let current and former advisers testify and not handing over documents in the aftermath of the April release of Mueller’s report that detailed Russian interference in the 2016 election to boost Trump‘s candidacy.

After the blow-up of the meeting and Trump‘s diatribe, Democrats accused him of setting them up and expressed concern about his conduct and the long-term outlook.

“The president has made it clear he doesn’t want to consider any substantive issue as long as he’s under investigation,” Dick Durbin, the No. 2 Senate Democrat, told Reuters in the U.S. Capitol after the turbulent events at the White House.

“I’ve got news for the president: Every president is under investigation. That’s the nature of our Constitution,” he said.

In the run-up to the infrastructure meeting, Trump was stewing over Pelosi’s cover-up remarks, according to a White House official. Pelosi, amid growing talk about impeachment, had told reporters about an hour before the scheduled meeting that Trump is engaged in a cover-up.

As the meeting neared, Trump told aides he wanted to hold an event in the Rose Garden to make a statement.

When Pelosi and Senate Democratic Leader Chuck Schumer arrived in the Cabinet Room, Trump walked in, stood at the head of a long boardroom table, and told them he had asked them over to talk about infrastructure, but that the speaker had just accused him of a cover-up. The meeting lasted only three to five minutes, the official said.

Once Trump exited, Pelosi told Treasury Secretary Steven Mnuchin and others in the room that prior presidents like Theodore Roosevelt had brought people together on infrastructure but Trump had walked out, two sources familiar with the meeting said.

Trump senior adviser Kellyanne Conway asked Pelosi, “Do you have a response to what the president actually said?” Pelosi fired back, “I’m going to engage directly with the president, not the staff.”

“That’s very pro-woman of you,” Conway fired back, the sources said.

Afterward, Trump strode to a podium adorned with a professionally made sign that read, “No Collusion, No Obstruction” and that also listed the cost and length of the Mueller probe.

Trump said, “I walked into the room and I told Senator Schumer, Speaker Pelosi, I want to do infrastructure. I want to do it more than you want to do it. I’d be really good at that – that’s what I do. But you know what? You can’t do it under these circumstances. So get these phony investigations over with.”

A source close to Trump said he has been troubled in recent days to see former aide Hope Hicks and other people close to him subpoenaed in the House probe.

Just three weeks ago, Trump and the Democrats agreed to spend $2 trillion on roads, bridges and other infrastructure. Wednesday’s meeting was supposed to be about ironing out the thorny details of how to pay for it all.

‘I PRAY FOR THE PRESIDENT’

“For some reason,” Pelosi told reporters, “and maybe it was lack of confidence on his part – that he really couldn’t match the greatness of the challenge that we have – he wasn’t really respectful of the Congress and the White House working together.”

Trump and the Democrats have become locked in a high-stakes power struggle over the ability of Congress to investigate him, with the president increasingly asserting that his advisers need not respond to lawmakers’ requests.

Numerous congressional probes now underway range from whether Trump tried to obstruct Mueller’s inquiry to the president’s undisclosed tax returns, his handling of numerous policy issues and possible conflicts of interest involving the businesses he has not divested even while serving.

Most of his fellow Republicans dismiss the investigations as political assaults ahead of the 2020 election.

Asked if there is a complete breakdown now in the legislative process or any relationship with Trump, Durbin said: “What would you think if the president invited us back tomorrow? You think he’d be there or would not walk in and perform another piece of stagecraft? I just don’t know.”

Pelosi and other senior House leaders have been trying to tamp down demands from more junior Democratic lawmakers for impeachment proceedings, urging them to give court subpoena enforcement actions time to progress.

Trump, three of his children and his company on Wednesday lost their bid to block Deutsche Bank AG and Capital One Financial Corp from providing financial records to Democratic lawmakers investigating Trump‘s businesses. U.S. District Judge Edgardo Ramos ruled in New York that Congress has the legal authority to demand the records.

In the first court test of Trump‘s stonewalling strategy, U.S. District Judge Amit Mehta in Washington on Monday blocked a lawsuit by Trump seeking to quash a subpoena by a House panel to his long-time accounting firm Mazars LLP seeking his financial records. Trump has appealed.

On another front, the Democratic House Intelligence Committee chairman has agreed to hold off enforcing a subpoena against Attorney General William Barr after the Justice Department agreed to turn over Mueller probe-related materials.