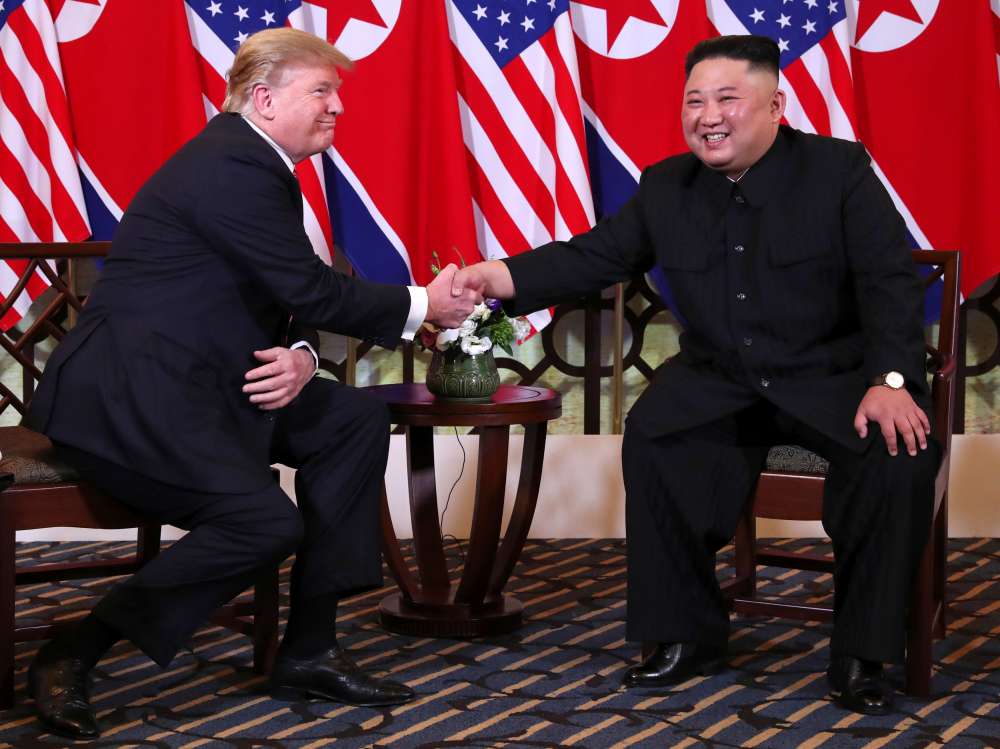 Trump arrived in Seoul late on Saturday for talks with Moon after attending a Group of 20 summit in Osaka, Japan, during which he made a surprise, spur-of-the-moment offer to meet Kim.

It will be the third time in just over a year that Trump and Kim have met, and four months since their second summit in Hanoi, Vietnam broke down.

“When a third summit between the United States and North Korea happens will depend what change today’s meeting will make,” Moon told a joint news conference with Trump.

Trump and Moon will visit the heavily fortified border together. Trump wanted to visit during a 2017 trip to South Korea but heavy fog prevented it.

Moon said earlier a handshake between Trump and Kim at the DMZ would be a historic event, and would give hope for progress in their dialogue.

“It would set a significant milestone in the process of achieving complete denuclearisation and lasting peace on the Korean peninsula,” Moon told Trump.

Kim and Moon held their historic first summit in the zone last year, which preceded the first U.S.-North Korean summit in Singapore in June last year.

Moon has championed efforts to end hostilities between North Korea and the United States, vowing to play a mediator role in nudging North Korea into giving up its nuclear weapons in exchange for sanctions relief and security guarantees.

Trump said earlier both he and Kim were eager to meet.

“It’s going to be very short, virtually a handshake. But that’s OK. A handshake means a lot,” Trump said after a meeting with South Korean business leaders including the heads of Samsung, Hyundai Motor, Lotte, SK and Poongsan groups.

He said he and Kim had a “good relationship” but there was still a long way to go to reach an agreement that would end the North’s nuclear programme in return for an end to sanctions and permanent peace on the Korean peninsula.

Trump told Moon that he had “plenty of time” and was in “no rush” to reach a deal.

North Korea has pursued nuclear and missile programmes for years in defiance of U.N. Security Council resolutions, and easing tensions with North Korea is one of the U.S. President’s top foreign policy priorities.

Trump made the offer to meet in a message on Twitter about his visit to South Korea, saying he wanted “just to shake his hand and say ‘Hello’.”

In response, the North’s KCNA state news agency quoted a senior North Korean official several hours later saying it was a “very interesting suggestion” and would be a “meaningful occasion,” but North Korea had not received an official proposal.

The Joint Security Area, with its cluster of distinctive bright blue buildings, has a chequered history of defections, tension and death. In 1976, axe-wielding North Korean soldiers murdered two American soldiers who were cutting down a poplar tree there to secure a clear view.

Trump, speaking at a news conference in Japan on Saturday, said he would be “very comfortable” stepping across the border into North Korea, as Moon did briefly last year.

Some South Korean analysts said a Trump-Kim encounter would do little to advance progress on denuclearisation.

“Trump is trying to get a free hand in controlling peace on the Korean peninsula with his tweets and we can’t let that happen,” said Kim Dong-yup of Kyungnam University’s Institute for Far Eastern Studies in Seoul.

“It’s a strategy and technique he adopted to deal with those who are in a weak position in negotiations, and that’s for domestic politics.”

By In Cyprus
Previous articleMan, pregnant woman killed in separate stabbings in London
Next articleTeenager arrested for carrying 12-inch knife