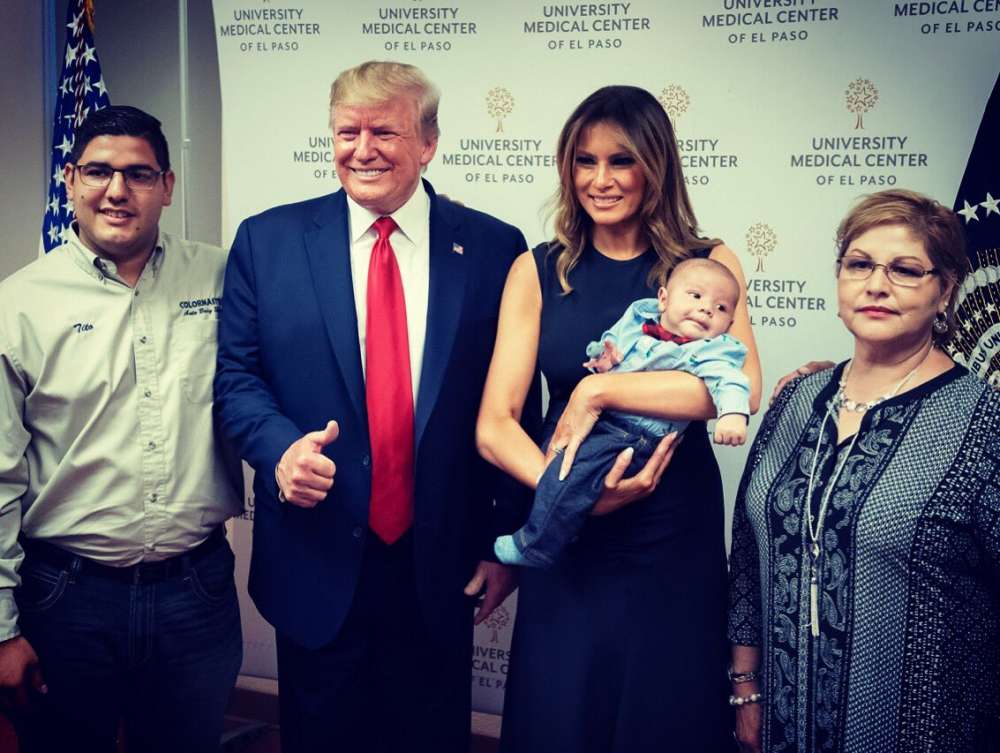 A photo of U.S. President Donald Trump smiling broadly and giving a thumbs-up as his wife, Melania, cradles a baby orphaned in the El Paso, Texas mass shooting has become a social media talking point days after the first lady posted it on Twitter.

The image was taken on Wednesday at the University Medical Center of El Paso during Trump’s visit to the West Texas border city to meet with first responders, medical personnel and surviving victims from Saturday’s gun violence at a Walmart store.

The president and his wife had traveled earlier in the day to Dayton, Ohio, for a similar hospital condolence call in the wake of a deadly shooting rampage that rocked that city just 13 hours after the bloodshed in El Paso.

The two shootings together claimed 32 lives, including that of the gunman who committed the Dayton massacre.

Trump avoided the press during both hospital visits, which were closed to media coverage, but the White House later released a brief video montage of the visits.

The first lady also tweeted several photos from the visit, including one that shows her standing in front of a University Medical Center of El Paso backdrop cradling a 2-month-old infant whose parents, Andre and Jordon Anchondo, were both slain in the Walmart attack, reportedly as they shielded him from gunfire.

I met many incredible people in Dayton, Ohio & El Paso, Texas yesterday. Their communities are strong and unbreakable. @potus and I stand with you! pic.twitter.com/SHzV6zcVKR

Standing beside the first lady is the smiling president giving a thumbs-up sign. They are flanked by the baby’s aunt and an uncle, Tito Anchondo, who is also smiling and has his arm stretched around Trump’s shoulders as the four pose together.

The optics of the picture struck many on social media as demonstrating a lack of empathy or respect for the gravity of the occasion by the president.

“A baby who was taken from home and forced to serve as a prop at a photo-op for the very monster whose hate killed her/his parents,” Democratic strategist Greg Pinelo wrote on Twitter in response to the photo.

But Tito Anchondo, who described himself and his slain brother as Trump supporters, told the Washington Post in an interview published on Friday that he felt consoled by the president’s visit and denied that Trump was there “pushing any kind of political agenda.”

Anchondo said he chose to take his orphaned nephew, baby Paul, to the hospital to meet the president, and said others were politicizing his family’s tragedy. The infant suffered two broken fingers in the shooting, but had since been discharged by doctors.