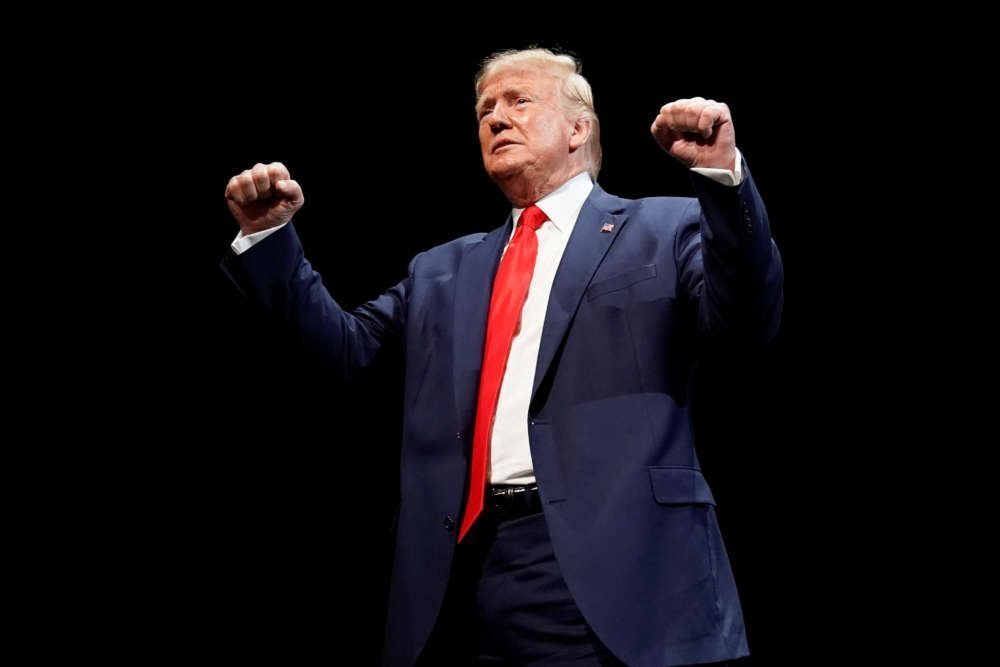 President Donald Trump on Thursday again invited foreign interference in a U.S. presidential election by publicly calling on China to investigate Democratic political rival Joe Biden, the kind of request that has already triggered an impeachment inquiry in Congress.

The Republican president said he believed both China and Ukraine should look into 2020 presidential hopeful Biden and his businessman son Hunter, and described the impeachment probe as “crap.”

“And by the way, likewise, China should start an investigation into the Bidens. Because what happened in China is just about as bad as what happened with Ukraine,” Trump told reporters at the White House.

Trump and his personal lawyer Rudy Giuliani have offered no evidence for their assertions of corruption against former vice president Biden, a leading contender for the Democratic Party nomination to run against Trump.

Questioned about whether he had asked Chinese President Xi Jinping to investigate, Trump said: “I haven’t, but it’s certainly something we can start thinking about.”

The Chinese Embassy in Washington did not immediately respond to a request for comment.

Trump’s appeal to China was particularly striking given that Washington and Beijing are locked in a bitter trade war which has damaged global economic growth. They are due to hold another round of talks in the United States next week.

Administration officials did not know that Trump was going to mention China but said he had talked about it previously and they were not surprised by it, two sources familiar with the situation said.

The China remarks stiffened the resolve of Democrats in the House of Representatives to push ahead with a probe into whether Trump should be impeached following revelations by an anonymous whistleblower who said that in Trump asked Ukraine in July to investigate the Bidens.

Hunter Biden was on the board of a Ukrainian gas company and formed a private equity fund in China.

At a healthcare event in The Villages, Florida, Trump said Democrats had launched the impeachment probe because they cannot beat him at the ballot box in 2020.

“That’s why they do the impeachment crap – they know they can’t win,” Trump said.

While the election is still a long way off, Reuters/Ipsos polling shows Trump narrowly trailing the top Democratic candidates, including Biden, in hypothetical matchups.

The impeachment probe could lead to the approval of articles of impeachment – or formal charges – against Trump in the Democratic-controlled House. A trial on whether to remove him from office would then be held in the Republican-controlled Senate. Many Republicans, however, have shown little appetite for ousting him.

He asked whether she planned to hold a vote of the full House authorizing the inquiry, and whether the president’s counsel would be allowed to attend all hearings and depositions. Refusing to do these things would contradict previous impeachment procedures, McCarthy said.

Pelosi announced the impeachment investigation last week after the whistleblower lodged a complaint about Trump asking Ukrainian President Volodymyr Zelenskiy to look into investigating the Bidens.

Trump froze $400 million in U.S. aid to Ukraine shortly before speaking to Zelenskiy, prompting accusations from Democrats that he had misused U.S. foreign policy for personal gain.

The investigation has angered Trump, whose volatile presidency survived a two-year federal probe that found Russia had intervened to help him win the White House in 2016.

Biden’s deputy campaign manager Kate Bedingfield said in a statement that Trump’s comments on Thursday showed he was “desperately clutching for conspiracy theories that have been debunked.”

But Vice President Mike Pence backed an investigation into Biden’s dealings with Ukraine.

“My predecessor had a son who was paid $50,000 a month to be on a Ukrainian board at the time that Vice President Biden was leading the Obama administration’s efforts in Ukraine, I think is worth looking into. And the president has made it very clear that he believes … other nations around the world should look into it as well,” Pence told reporters in Arizona.

“The president of the United States encouraging a foreign nation to interfere again to help his campaign by investigating a rival is a fundamental breach of a president’s oath of office. It endangers our elections. It endangers our national security,” Schiff told reporters.

A longtime U.S. diplomat who served as Trump’s special envoy for Ukraine spoke to congressional committee staff and members on Thursday as part of the Democratic-led impeachment probe.

Kurt Volker resigned as special representative for Ukraine negotiations on Friday, the day after the public release of the whistleblower complaint that described him as trying to “contain the damage” from efforts by Trump’s lawyer Giuliani to press Ukraine to investigate Democrats.

Giuliani told Reuters on Thursday that Volker never expressed any concerns about his efforts and put him in touch with Andriy Yermak, an adviser to Zelenskiy.

“There are texts where he asked me to report back to him on Yermak,” Giuliani said. “There are texts that show that I did. There’s never a text anywhere that says he’s concerned about anything. And he never said that to me.”