Trump praises strong relationship with May after damning her Brexit plan 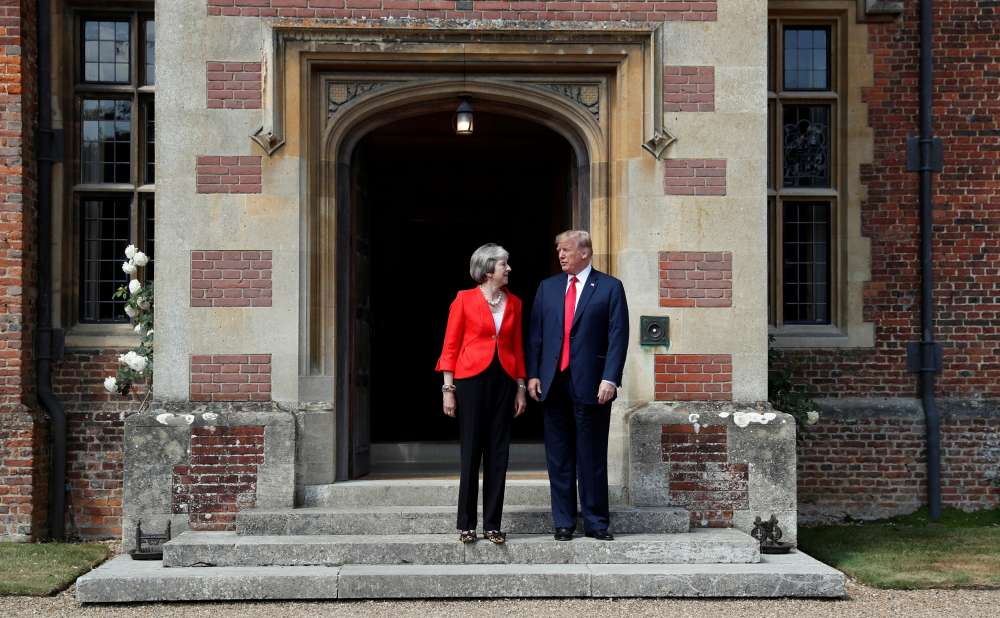 President Donald Trump said on Friday he had a very strong relationship with British Prime Minister Theresa May, having earlier scorned her Brexit strategy which he said had probably killed off hope for a future U.S.-British trade deal.

In an interview published just hours before he was due to have lunch with May and tea with Queen Elizabeth on Friday, Trump chided the “very unfortunate” results of the prime minister’s strategy for negotiating Britain’s departure from the European Union.

“If they do a deal like that, we would be dealing with the European Union instead of dealing with the UK, so it will probably kill the deal,” Trump told the Rupert Murdoch-owned Sun newspaper.

“I would have done it much differently,” he told The Sun, which urged its readers to back Brexit before a referendum in June 2016. “I actually told Theresa May how to do it, but she didn’t listen to me.”

Trump also heaped praise on Boris Johnson, who resigned as foreign secretary this week along with Brexit Secretary David Davis in protest at May’s strategy. Johnson, the president said, “would be a great prime minister”.

No sitting U.S. president has ever made such biting public criticism of a British prime minister while visiting, and his comments undermined May in her party, her country and abroad.

But, as the leaders met for talks at May’s official country residence Chequers, both tried to play down the president’s intervention into the Brexit debate.

Asked by a U.S. reporter if he regretted his comments to the Sun, Trump looked away and shook his head.

“We’ve got a lot to discuss,” May said, adding they would talk about the British-U.S. “special relationship” and opportunities for a trade deal.

Sterling fell half a percent to a 1 1/2-week low of $1.3131, partly on Trump’s comments in the newspaper interview.

“Where are your manners, Mr President?” asked Sam Gyimah, a junior minister in May’s government.

As Britain prepares to leave the EU on March 29, 2019, supporters of Brexit have made much of the so-called special relationship with the United States and the benefits of forging closer trade ties with the world’s biggest economy.

Many have cast May’s plan as a betrayal, including lawmakers in her deeply divided Conservative Party, who have warned that she might face a leadership challenge.

Jacob Rees-Mogg – a leading Conservative Brexiteer and considered a potential alternative party leader by some – said it was perfectly reasonable for Trump to make such comments, adding that May now had an opportunity to change her mind on her Brexit plan.

White House spokeswoman Sarah Sanders said the president “likes and respects Prime Minister May very much,” adding that he said in the interview she “is a very good person” and that he “never said anything bad about her”.

For supporters, Trump and Brexit offer the prospect of breaking free from what they see as obsolete institutions and rules. But for many British diplomats, Brexit marks the collapse of a 70-year strategy of trying to balance European integration with a U.S. alliance based on blood, trade and intelligence sharing.

Trump has frequently angered British politicians. Late last year, May criticised him for retweeting a message by a member of a British far-right group, and the speaker of parliament has said Trump would not be welcome to address the chamber.

More than 64,000 people have signed up to demonstrate in London against Trump’s visit, one of more than 100 protests expected during his four-day visit. On Friday, protesters flew a blimp depicting the U.S. president as an orange, snarling baby outside the British parliament.

“I guess when they put out blimps to make me feel unwelcome, no reason for me to go to London,” Trump told the Sun.

Protester Nicola Tanner said it was great that the blimp had “touched a nerve” with the president. “It’s embarrassing how much our government is falling over themselves to try to appease someone who has no interest in any sort of give-and-take in the UK-U.S. relationship at all,” said the 33-year-old public official from Bristol, southwest England.

On Thursday, May invoked World War Two leader Winston Churchill as she addressed Trump and business leaders at a dinner at Blenheim Palace, the 18th century country house where Churchill was born.

“Mr. President, Sir Winston Churchill once said that ‘to have the United States at our side was, to me, the greatest joy’,” May told Trump, according to a text of her speech.

“The spirit of friendship and cooperation between our countries, our leaders and our people, that most special of relationships, has a long and proud history,” she said, adding that the United States was “not just the closest of allies but the dearest of friends”.

While Trump’s trip was not a full state visit, he has been given red carpet treatment including marching military bands. He is scheduled to have tea with Queen Elizabeth at Windsor Castle where her grandson Prince Harry married U.S. actress Meghan Markle in May.