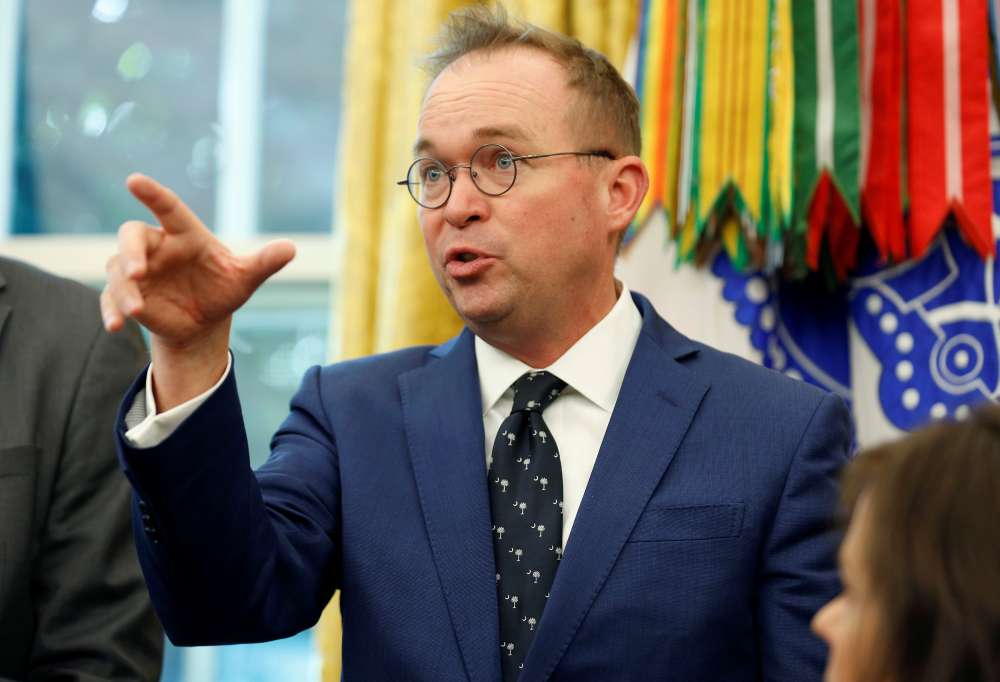 U.S. President Donald Trump on Friday moved to end speculation that he was having a hard time finding a new chief of staff, naming his budget chief Mick Mulvaney to the top post on a temporary basis.

Mulvaney, a hard-charging conservative and former congressman, will be the third person in two years to try to bring order to what has often been a chaotic White House. Trump named him after two other prominent candidates withdrew from consideration in the space of a week.

“For the record, there were MANY people who wanted to be the White House Chief of Staff,” Trump said on Twitter. “Mick M will do a GREAT job!”

The job is seen as one of the most important jobs in Washington: the gatekeeper to the president charged with marshalling the resources of the office to carry out his priorities.

The most recent occupant – John Kelly, a retired Marine Corps general – had some success in restoring order after he was appointed in July 2017, but had a rocky relationship with Trump. Kelly will stay through the end of December.

Mulvaney will take the reins at a time when Republican Trump, weakened by Democrats winning control of the U.S. House of Representatives in elections last month, grapples with investigations into his businesses and most controversial policies. In addition, Special Counsel Robert Mueller is investigating whether there was collusion between Trump’s 2016 election campaign team and Russian officials.

Mulvaney, 51, rose to prominence as a founder of the powerful House Freedom Caucus conservative voting bloc. He brings an in-depth knowledge of Congress to the job.

As head of the Office of Management and Budget (OMB), he has experience working with Trump and his top aides at the White House.

But the temporary nature of Mulvaney’s appointment may undermine his authority in speaking for the president, and limit his ability to do the job, said Chris Whipple, author of a book on White House chiefs of staff called “The Gatekeepers.”

“Donald Trump desperately needs a White House chief who can execute his agenda, and you can’t do that if you have an expiration date on your forehead,” Whipple said.

Mulvaney, who has often defended Trump’s economic policies on the closely watched Sunday political talk shows, has long been cited as a contender for the chief of staff job.

Mulvaney and Trump face another funding deadline on Friday. If they cannot resolve an impasse with Congress, there will a partial government shutdown.

Even though Mulvaney was designated as “acting” chief by Trump, a White House official told reporters there was “no time limit” on his appointment.

Past presidents have also pulled in OMB directors to the post of chief because of their experience in negotiating with Congress, said Nick Kachiroubas of DePaul University, who has interviewed 11 former chiefs of staff.

Mulvaney, though acting, will not be seen as “an outsider,” giving him “more juice” in working with White House officials than a temporary chief otherwise might, Kachiroubas said.

“The big question we all ask is, why is this temporary?” he told Reuters.

“It only speaks to continued ambiguity in the White House.”

For months, as his relationship with Kelly deteriorated, Trump had negotiated with Nick Ayers to take on the role. In a surprise move, Ayers, a Republican strategist and chief of staff for Vice President Mike Pence, declined the position on Sunday.

Ayers had wanted to do the job on an interim basis, but Trump had sought a two-year commitment, which Ayers ultimately rejected, sources familiar with the situation told Reuters.

Trump insisted this week that he had a deep pool of “great people” lining up to push for the job. “I have so many people, I cannot interview them all,” he told Reuters in an interview on Tuesday.

But hours before Trump announced Mulvaney’s appointment on Twitter, former New Jersey Governor Chris Christie – seen as a frontrunner for the job – also withdrew his name from consideration.

Trump had been considering his son-in-law and senior adviser, Jared Kushner, and U.S. Trade Representative Robert Lighthizer as possibilities to replace Kelly on a long-term basis, sources familiar with the situation said.

This is not the first time Trump has turned to Mulvaney in a pinch.

Last November, he named Mulvaney the acting head of the Consumer Financial Protection Bureau, an agency that had been closely associated with former President Barack Obama’s tenure.

The appointment was fought in court, but Mulvaney prevailed and ran the agency until earlier this month, when Trump’s official pick was confirmed by the U.S. Senate.