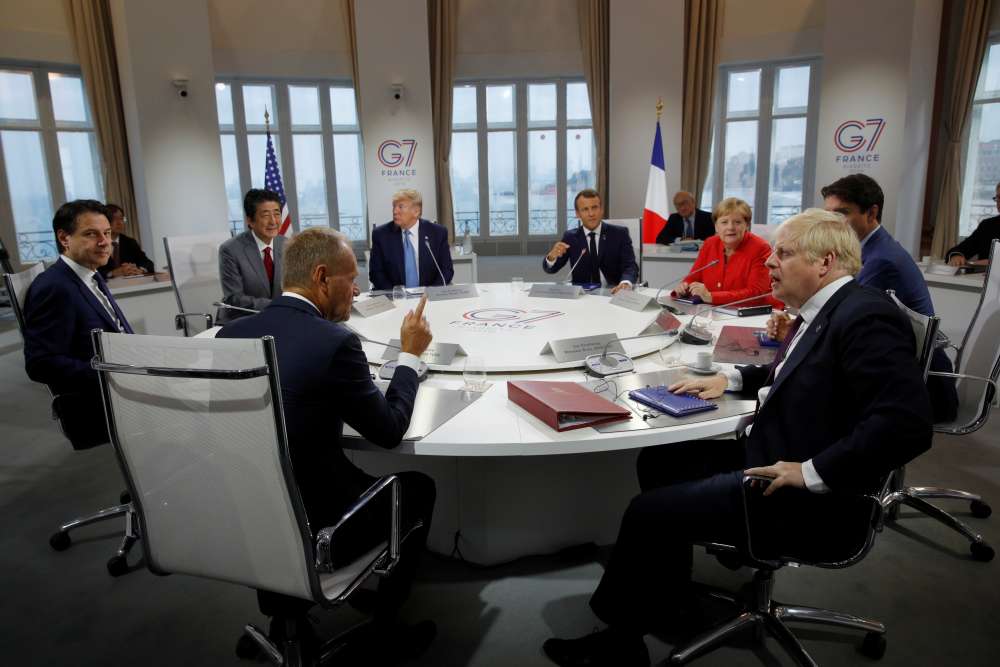 U.S. President Donald Trump said on Sunday he was getting along well with Western allies at a G7 summit in France, dismissing reports of rifts among leaders and declaring that they “respect” the trade war between Washington and Beijing.

The G7 gathering is taking place against a backdrop of worries about a global economic downturn and coincides with an era of international disunity across an array of issues.

He began his first full day in the Basque coast resort of Biarritz with a show of amity. Addressing journalists as Johnson stood beside him, he said: “Do you know who this is? Does everybody know? He’s going to be a fantastic prime minister I can tell you.”

He said Britain would have a major trade deal with Washington after it leaves the European Union and, asked what his advice on Brexit was for Johnson, he replied: “He needs no advice, he is the right man for the job”.

Nevertheless, policy differences over trade protectionism, climate change, Iran and France’s push for a universal tax on digital technology giants loomed over the summit of the industrialised nations’ leaders.

He said G7 allies were not pressuring him to relent in his standoff with China, adding “they respect the trade war”.

Still, Johnson voiced concern on Saturday about creeping protectionism and said those who support tariffs “are at risk of incurring the blame for the downturn in the global economy”. Standing beside Trump on Sunday, he said: “Our view on the trade war: we’re in favour of trade peace.”

Underlining the multilateral discord, Trump also threatened his host on the eve of the summit, saying the United States would tax French wine “like they’ve never seen before” unless Paris dropped a digital tax on U.S. technology companies.

Looking to broaden the scope of the debate, Macron has invited several African leaders to discuss problems facing their continent, while leaders from India, Australia, Chile and Spain are due to attend a dinner on Sunday where the focus will be on the environment and other issues.

Trump up-ended last year’s G7 summit in Canada, walking out early and disassociating himself from the final communique having initially endorsed the document.

The delegations had barely arrived in Biarritz before differences were exposed, with senior U.S. officials accusing the host, French President Emmanuel Macron, of looking “to fracture the G7” by focusing on “niche issues” rather than major global concerns.

Overnight, Trump wrote on Twitter that lunch with Macron was the best meeting the pair had yet had, and that a summit dinner with world leaders on Saturday “went very well”.

While the transatlantic rift is the most stark, there are also deep divisions within the European camp, with Johnson making his G7 debut at a time when he is struggling to persuade EU capitals to renegotiate Britain’s exit from the bloc.

Johnson and Tusk, who are due to talk on Sunday, sparred ahead of the meeting over who would take the blame if Britain leaves the EU on Oct. 31 without a Brexit agreement acceptable to both sides.

Germany and Britain both voiced deep concern about the fires, but disagreed with Macron on how to respond, saying shooting down the ambitious Mercosur trade accord would not help save the Amazon.

By In Cyprus
Previous articleTwo Israeli drones fall in Beirut suburbs, one explodes – army, Hezbollah
Next articleFamagusta mayoral elections: turnout at 15.9% at noon