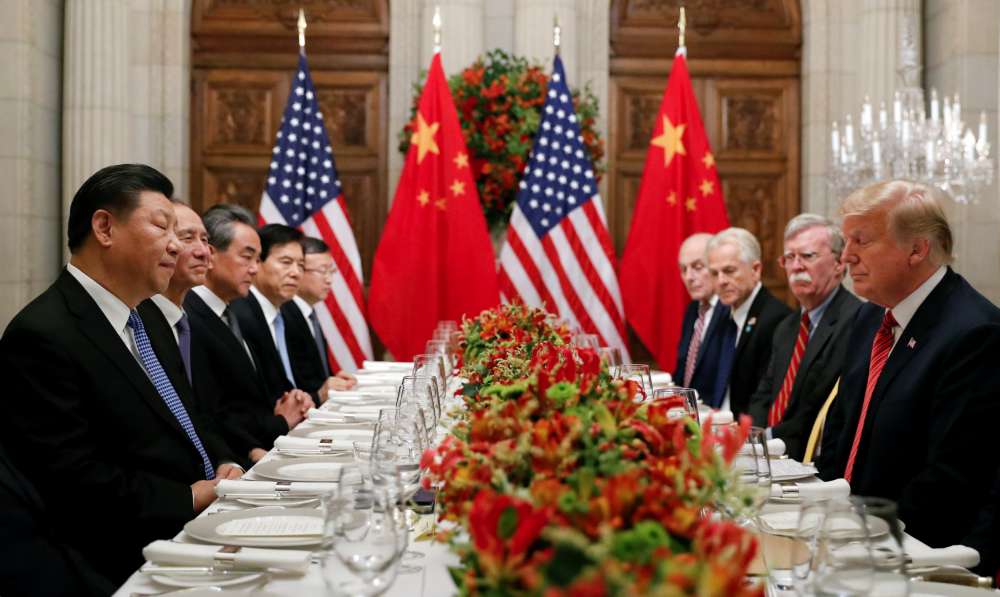 U.S. President Donald Trump told Chinese President Xi Jinping on Saturday he hoped they would achieve “something great” on trade for both countries as they opened a high-stakes summit aimed at defusing a damaging tariffs war between Washington and Beijing.

With the United States and China locked in an economic dispute that has roiled global financial markets and weighed on the world economy, Trump and Xi sat down for talks and dinner at the end of a two-day gathering of world leaders in Buenos Aires.

Trump struck a positive note as he sat across from Xi, despite the U.S. president’s earlier threats to impose new tariffs on Chinese imports.

“We’ll be discussing trade and I think at some point we are going to end up doing something great for China and great for the United States,” Trump said when a small pool of reporters was briefly allowed into the room.

He suggested that the “incredible relationship” he and Xi had established would be “the very primary reason” they could make progress on trade, though he offered no specifics on how they might resolve the main issue dividing the world’s two biggest economies.

At the same time, Trump again raised with Xi his concern about the synthetic opioid fentanyl being sent from China to the United States, urging the Chinese leader to place it in a “restricted category” of drugs that would essentially criminalize it.

Earlier on Saturday, the leaders of the world’s largest economies backed an overhaul of the global body that regulates international trade disputes.

The Group of 20 industrialized nations called for reforms to the crisis-stricken World Trade Organization in a final statement from their two-day gathering in Argentina, marking a victory for Trump’s drive to overhaul the trade body.

Officials expressed relief that agreement on a final statement was reached after negotiators worked through the night to overcome differences over language on climate change.

The final text recognized trade as an important engine of global growth but made only a passing reference to “the current trade issues,” after the U.S. delegation won a battle to keep any mention of protectionism out of the statement.

In addition to tariffs on Chinese goods, Trump has imposed tariffs on steel and aluminums imports into the United States this year. Numerous countries have filed litigation at the WTO to contest the levies.

The United States is unhappy with what it says is the WTO’s failure to hold Beijing to account for not opening up its economy as envisioned when China joined the body in 2001. The European Union is also pushing for sweeping changes to how the WTO operates.

“Notwithstanding our differences, we have been able to agree a path forward at the G20,” French President Emanuel Macron told a news conference. “The United States has endorsed a clear multilateralist text.”

G20 delegates said negotiations on the final summit statement proceeded more smoothly than at a meeting of Asian leaders two weeks ago, where disagreements on protectionism and unfair trading practices prevented a consensus.

European officials said a reference to refugees and migration – a sensitive issue for Trump’s administration – was excised to ensure consensus.

On climate change, the United States once again marked its differences with the rest of the G20 by reiterating in the statement its decision to withdraw from the Paris Agreement and its commitment to using all kinds of energy sources.

The other members of the group reaffirmed their commitment to implement the Paris deal and tackle climate change, taking into account their national circumstances and relative capabilities.

With the United States and China clashing over commerce and security, global financial markets next week will take their lead from the results of Saturday’s talks between Trump and Xi.

Ahead of what was seen as the most important meeting of U.S. and Chinese leaders in years, both sides said differences remained, and the outcome of the talks were uncertain.

Beijing hopes to persuade Trump to abandon plans to hike tariffs on $200 billion of Chinese goods to 25 percent in January, from 10 percent at present. Trump has threatened to go ahead with that and possibly add tariffs on $267 billion of imports if there is no progress in the talks.

A Chinese foreign ministry official in Buenos Aires said there were signs of increasing consensus ahead of the discussions but that differences persisted.

Trump has long railed against China’s trade surplus with the United States, and Washington accuses Beijing of not playing fairly on trade. China calls the United States protectionist and has resisted what it views as attempts to intimidate it.

The two countries are also at odds militarily over China’s extensive claims in the South China Sea and U.S. warship movements through the highly sensitive Taiwan Strait.

“There is an urgent need to de-escalate trade tensions, reverse recent tariff increases, and modernize the rules-based multilateral trade system,” she said.

U.S. officials said a call by G20 leaders for the IMF and World Bank to improve monitoring debt levels was aimed at ensuring that developing economies did not become to heavily indebted to China in return for infrastructure projects.

U.S. officials, including Vice President Mike Pence, have warned about China’s increasing influence across swaths of the developing world, including Latin America. G20 summit host Argentina is expected to sign a series of deals with China on Sunday during a one-day state visit by Xi.

Apart from trade and climate change, Russia’s seizure of Ukrainian vessels drew condemnation from other G20 members, while the presence of Crown Prince Mohammed bin Salman at the summit raised an awkward dilemma for leaders.

Saudi Arabia’s de facto ruler arrived amid controversy over the killing of Saudi journalist Jamal Khashoggi, though Saudi officials have said the prince had no prior knowledge of the murder.

While Prince Mohammed was largely sidelined by other leaders at public events, the leader of the OPEC heavyweight had a series of bilateral meetings, including a closely watched encounter with Putin.