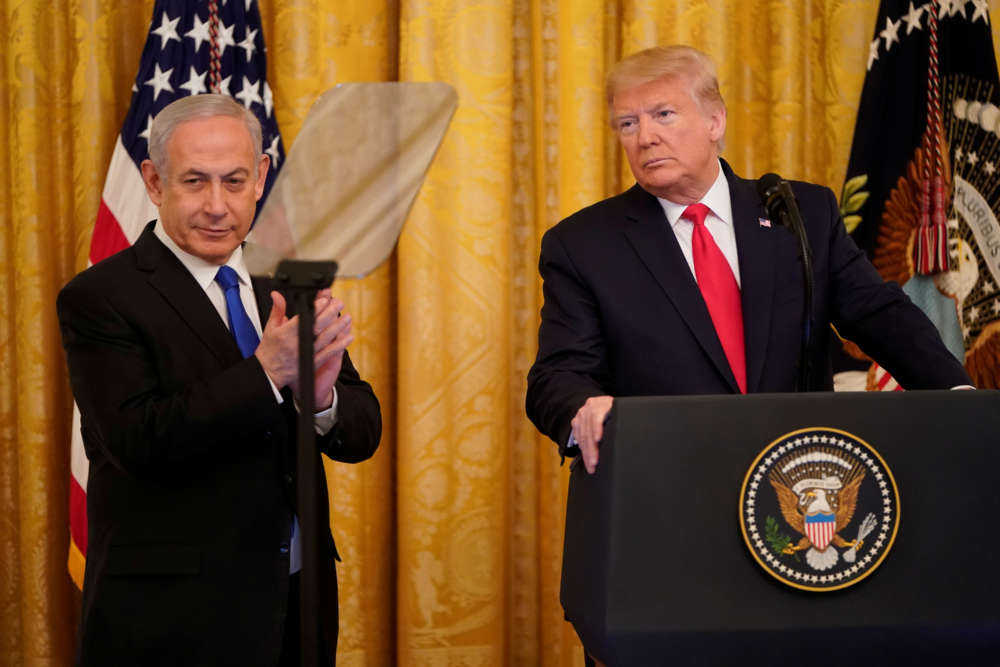 Trump announced his plan for Israeli-Palestinian peace at a White House event with embattled Israeli Prime Minister Benjamin Netanyahu standing at his side. It includes what Trump called a four-year freeze by Israel on new settlement activity.

Although Trump’s stated aim was to end decades of conflict, the plan he advanced favoured Israel, underscored by the absence of Palestinians from Trump’s announcement.

It seemed unlikely to immediately advance Israeli-Palestinian talks that broke down in 2014, but the plan was called “an important starting point for a return to negotiations” by the United Arab Emirates. Saudi Arabia and Egypt also offered encouraging statements.

Palestinian President Mahmoud Abbas, however, mocked what Trump has called the “deal of the century,” describing it as the “slap of the century.”

Palestinians have refused to deal with the Trump administration in protest at pro-Israel policies such as moving the U.S. Embassy from Tel Aviv to Jerusalem, the eastern part of which is sought by the Palestinians.

Trump set in motion a four-year timeline for Palestinians to agree to a security arrangement with Israel, halt attacks by the Islamist militant group Hamas and set up governing institutions in order to establish a Palestinian state with its capital in Abu Dis, a part of east Jerusalem.

That too poses a potential problem for Palestinians.

Abu Dis is a West Bank village just east of the Israeli municipal boundaries for Jerusalem. Palestinians living in Abu Dis are cut off by a high concrete Israeli security wall and checkpoints.

Palestinians reject any proposal that does not envision a Palestinian capital in all of East Jerusalem, which includes the walled Old City.

Trump’s plan says that barrier should serve as a border between the capitals of the two states, adding that Jerusalem should remain Israel’s undivided, sovereign capital.

“My vision presents a win-win opportunity for both sides, a realistic two-state solution that resolves the risk of Palestinian statehood to Israel’s security,” Trump said.

‘JERUSALEM IS NOT FOR SALE’

Abbas, speaking to reporters in the West Bank city of Ramallah, said: “Jerusalem is not for sale, our rights are not for sale and are not for bargain and your deal, the conspiracy will not pass.”

White House senior adviser Jared Kushner, one of the architects of the plan, told Reuters Television the Palestinians “look quite foolish” for immediately rejecting the plan and should take some time to consider “a very strong opening offer.”

“If we feel like there is a good-faith chance or a desire on their side to come with a counter-proposal, we’ll figure out the right forum to engage in it to bring about a solution,” he said.

Before the Trump announcement, thousands of Palestinians demonstrated in Gaza City and Israeli troops reinforced positions near a flashpoint site between the Palestinian city of Ramallah and the Jewish settlement of Beit El in the West Bank.

Critics say both Trump and Netanyahu have been intent on diverting attention away from domestic troubles. Trump is going through an impeachment trial, while Netanyahu was formally indicted in court on corruption charges on Tuesday. Both men deny any wrongdoing.

Netanyahu also faces a difficult election in March – his third in less than a year. He is locked in a battle with Blue and White Party chief Benny Gantz, who also expressed support for the Trump plan.

Netanyahu said the Trump plan offered Palestinians a pathway to a future state but that it may take them “a very long time to get to the beginning of that path.”

“If they agree to abide by all the conditions you have put forward in your plan, Israel will be there. Israel will be prepared to negotiate peace right away,” he said.

Trump said he had sent a letter to Abbas asking him to study the deal.

“I explained to him that the territory allocated for his new state will remain open and undeveloped for a period of four years. During this time, Palestinians can use all appropriate deliberation to study the deal, negotiate with Israel, achieve the criteria for statehood and become a truly independent and wonderful state,” he said.

The White House document said Israel agreed to a four-year “land freeze” to secure the possibility of a two-state solution. But a senior Israeli official later played down the notion of a settlement freeze in the West Bank.

U.S. senior administration officials said they expected initial Palestinian skepticism over the plan but hoped they would agree to negotiate over time. It places high hurdles for the Palestinians to overcome to reach their long-sought goal of a state.

“Strip away the domestic and Israeli political considerations that determined the timing of the plan’s release, and the message to the Palestinians, boiled down to its essence, is: ‘You’ve lost, get over it,'” said Robert Malley, president of the International Crisis Group and a former U.S. National Security Council official.

The U.S. plan represented the most detailed attempt to break the deadlock between Israel and the Palestinians in several years.

Trump has endorsed a proposed map outlining the two states, U.S. officials said. The Palestinian state would be double the size of land that Palestinians currently control and would be connected by roads, bridges and tunnels, they said.

Trump’s plan calls for Palestinian refugees to settle in a future Palestinian state and creates a “generous compensation fund” for them, one of the officials said.