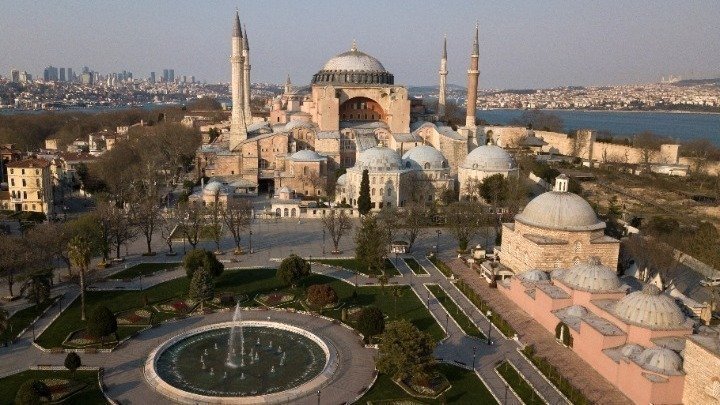 US President Donald Trump expressed his strong dissatisfaction with the decision of Turkish President Recep Tayyip Erdogan to turn Ayia Sophia into a mosque during his meeting with Archbishop Elpidophoros of America.

After the scheduled thirty-minute meeting on Thursday Archbishop Elpidophoros, the head of the Orthodox Archdiocese of America, had with US Vice President Michael Pence in Washington, Trump, informed of the Archbishop’s presence in the White House, called him to his office and talked with him about critical issues for about 15 minutes.

The 45th POTUS appeared very annoyed and expressed his concern on the issue of the protection of human rights and especially religious freedoms of minorities in Turkey.

In fact, he declared himself a helper and supporter of the Ecumenical Patriarchate and personally of Patriarch Bartholomew as well as of Hellenism and stressed that he would proceed immediately with the necessary interventions.

As Vice President Pence pointed out in a post on Twitter, America will stand firm with the Greek Orthodox Church in the call for Ayia Sophia to remain accessible as a source of inspiration and reflection for every person of every faith.

I am grateful to have met with President Trump (@POTUS) and @VP Pence in the @WhiteHouse and communicated our grave dismay at the re-conversion of #HagiaSophia into a mosque, as well as ongoing security concerns for the Ecumenical Patriarchate and issues of religious liberty.

By In Cyprus
Previous articleMacron expresses solidarity with Greece and Cyprus in post written in Greek
Next articleCorona virus testing in progress for 10.000 employees