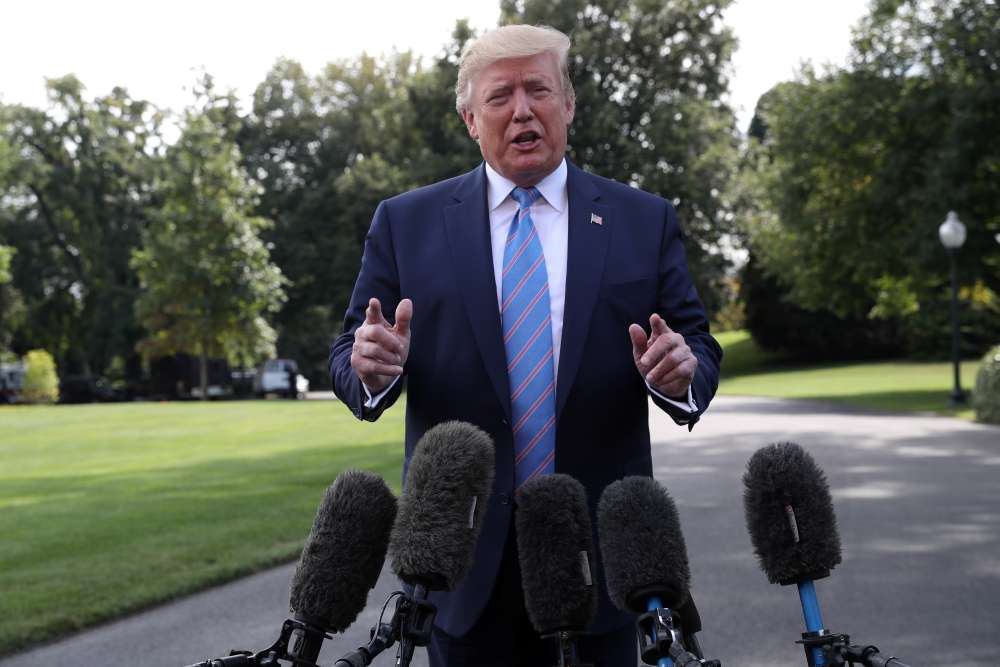 U.S. President Donald Trump on Tuesday backed off his Sept. 1 deadline for 10% tariffs on remaining Chinese imports, delaying duties on cellphones, laptops and other consumer goods, in the hopes of blunting their impact on U.S. holiday sales.

The delay which, affects about half of the $300 billion target list of Chinese goods – along with news of renewed trade discussions between U.S. and Chinese officials – sent stocks sharply higher and drew cautious relief from retailers and technology groups.

Trump’s 10% tariffs will be effective from Dec. 15 for thousands of products including clothing and footwear, possibly buttressing the holiday selling season from some of the fallout from the protracted trade spat between the world’s two largest economies.

Liu agreed with U.S. Trade Representative Robert Lighthizer and Treasury Secretary Steven Mnuchin to speak again by phone within the next two weeks, the ministry said.

Trump has said the two sides may still meet in early September as scheduled.

The delay in tariffs on a substantial portion of a $300 billion list of remaining Chinese imports sent U.S. stocks surging, after steep losses in the past week, with the Standard & Poor’s 500 up 1.5% and the Nasdaq Composite gaining nearly 2%.

Shares of market bellwether Apple Inc soared 4.2% on news that its core iPhone, tablet and laptop computer products would be spared from tariffs for the time being.

But the Trump administration still plans to impose 10% tariffs on thousands of Chinese food, clothing and other consumer electronics products beginning Sept. 1.

Among these are Chinese-made smartwatches from Apple and Fitbit, smart speakers from Amazon.com Inc, Google and Apple, and Bluetooth headphones and other devices, a category estimated at $17.9 billion last year by the Consumer Technology Association.

Flat screen televisions from China, a category worth $4.5 billion, also will face 10% tariffs on Sept. 1 after being spared from Trump’s first round of tariffs more than a year ago.

A trade group representative said USTR informed them that it opted to delay tariffs on items where China supplies more than 75 percent of total U.S. imports. Product categories where China supplies less than 75 percent will still face tariffs on Sept. 1, the representative said, speaking on condition of anonymity because the information was not publicly released.

Based on a Reuters analysis, the delay could extend to around half of the $300 billion list of remaining Chinese imports. Chinese imports subject to the tariffs on Dec. 15 totaled about $156 billion last year, according U.S. Census bureau data.

While most retailers would have stocked their holiday merchandise before the September deadline, some might have faced the tariffs for fill-in orders late in the holiday shopping season.

Still, the Retail Industry Leaders Association said “removing some products from the list and delaying additional 10% tariffs on other products, such as toys, consumer electronics, apparel and footwear, until Dec. 15 is welcome news as it will mitigate some pain for consumers through the holiday season.”

The Consumer Technology Association applauded the delay on some items, but added: “Next month, we’ll begin to pay more for some of our favorite tech devices – including TVs, smart speakers and desktop computers. The administration should permanently remove these harmful tariffs and find another way to hold China accountable for its unfair trading practices.”

A separate group of products will be removed from the tariff list altogether, the USTR said, “based on health, safety, national security and other factors.” It did not immediately identify these items.

Trump announced the Sept. 1 tariffs less than two weeks ago, blaming China for not following through on promises to buy more American agricultural products during talks in Shanghai at the end of July. That move was met with a drop in China’s yuan currency a few days later, prompting the Trump administration to declare Beijing a currency manipulator and sending markets tumbling for several days last week.

The tariff delay, combined with renewed talks with China, suggest Trump may be willing to compromise.

In a sign the administration may be expecting something in return, Trump tweeted on Tuesday: “As usual, China said they were going to be buying ‘big’ from our great American Farmers. So far they have not done what they said. Maybe this will be different!” Trump tweeted.

Trump’s tariff delay comes amid growing concerns about a global economic slowdown. Goldman Sachs said on Sunday fears of the U.S.-China trade war leading to a recession were increasing and Goldman no longer expects a trade deal between the two countries before the 2020 U.S. presidential election.

Trump has also personally criticized Chinese President Xi Jinping for failing to do more to stem sales of the synthetic opioid fentanyl amid an opioid overdosing crisis in the United States.

The USTR office plans to conduct an exclusion process that could allow more items to be removed from the 10% tariff list.