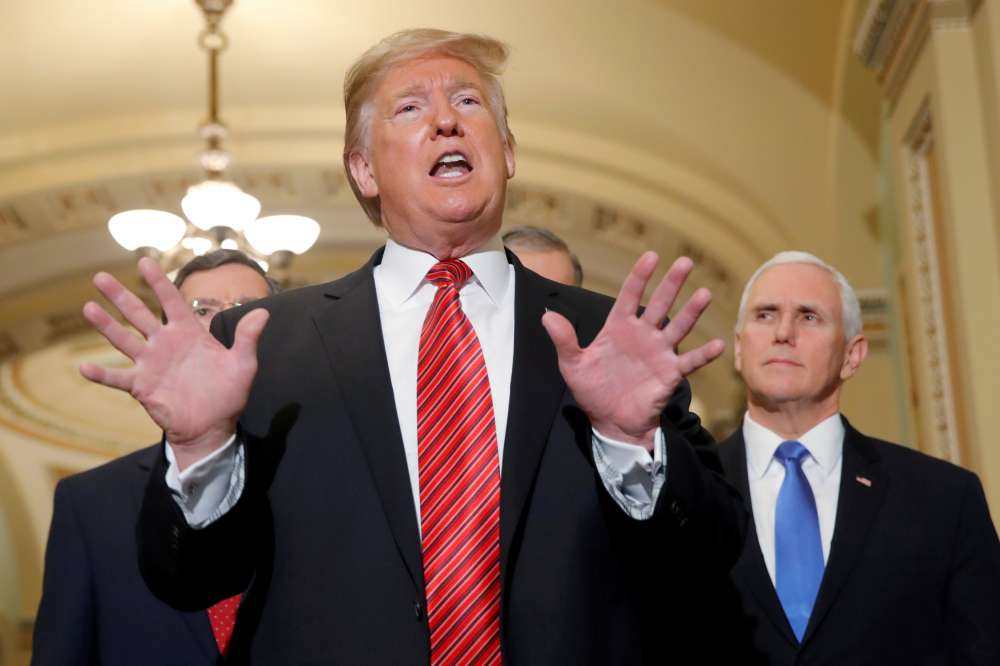 President Donald Trump on Friday declared a national emergency in a bid to fund his promised wall at the U.S.-Mexico border without congressional approval, an action Democrats vowed to challenge as a violation of the U.S. Constitution.

The Republican president’s move, circumventing Congress, seeks to make good on a 2016 presidential campaign pledge to build a border wall that Trump insists is necessary to curtail illegal immigration he blames for bringing crime and drugs into the United States.

Within hours, the action was challenged in a lawsuit filed on behalf of three Texas landowners, saying that Trump’s declaration violates the U.S. Constitution and that the planned wall would infringe on their property rights.

Both California and New York said that they, too, planned to file lawsuits.

Hours after Trump’s announcement, the Democratic-controlled House of Representatives’ Judiciary Committee said it had launched an investigation into the emergency declaration.

In a letter to Trump, committee Democrats asked him to make available for a hearing White House and Justice Department officials involved in the action. They also requested legal documents on the decision that led to the declaration, setting a deadline of next Friday.

“We believe your declaration of an emergency shows a reckless disregard for the separation of powers and your own responsibilities under our constitutional system,” said the letter, signed by Chairman Jerrold Nadler and other top Democrats on the panel.

Trump on Friday also signed a bipartisan government spending bill that would prevent another partial government shutdown by funding several agencies that otherwise would have closed on Saturday.

The funding bill represented a legislative defeat for him since it contains no money for his proposed wall – the focus of weeks of conflict between Trump and Democrats in Congress.

Trump made no mention of the bill in rambling comments to reporters in the White House’s Rose Garden.

He had demanded that Congress provide him with $5.7 billion in wall funding as part of legislation to fund the agencies. That triggered a historic, 35-day government shutdown in December and January that hurt the U.S. economy and his opinion poll numbers.

By reorienting his quest for wall funding toward a legally uncertain strategy based on declaring a national emergency, Trump risks plunging into a lengthy legislative and legal battle with Democrats and dividing his fellow Republicans – many of whom expressed grave reservations on Friday about the president’s action.

Fifteen Democrats in the Republican-controlled Senate introduced legislation on Thursday to prevent Trump from invoking emergency powers to transfer funds to his wall from accounts Congress has already committed to other projects.

“The president’s actions clearly violate the Congress’s exclusive power of the purse, which our Founders enshrined in the Constitution,” they said in a statement. “The Congress will defend our constitutional authorities in the Congress, in the courts, and in the public, using every remedy available.”

The first legal challenge, filed in federal court in Washington, came from three Texas landowners along the Rio Grande river claiming they were informed the U.S. government would seek to build a border wall on their properties if money for the project were available in 2019.

The lawsuit, filed on their behalf by the consumer advocacy group Public Citizen, also named the Frontera Audubon Society as a plaintiff whose “members’ ability to observe wildlife will be impaired” by construction of a border wall and resulting habitat damage.

The suit contests Trump’s assertion of a national emergency at the border to justify the president’s action.

Trump acknowledged his order would face a lengthy court fight.

“I expect to be sued. I shouldn’t be sued. … We’ll win in the Supreme Court,” he predicted.

Trump may have also undermined his administration’s argument about the urgency of the situation when he told reporters, “I didn’t need to do this. But I’d rather do it much faster.”

In their letter to Trump, House Judiciary Democrats said that language had left them “troubled.”

Both the House and the Senate could pass a resolution terminating the emergency by majority vote. However, any such measure would then go to Trump, who would likely veto it. Overriding the veto would require a two-thirds vote in both chambers.

Although Trump says a wall is needed to curb illegal immigrants and illicit drugs coming across the border, statistics show that illegal immigration via the border is at a 20-year low and that many drug shipments come through legal ports of entry.

Confronted with those statistics by reporters at the Rose Garden event, Trump said they were “wrong.”

He estimated his emergency declaration could free up as much as $8 billion to pay for part of the wall. Estimates of its total cost run as high as $23 billion.

As a candidate, Trump repeatedly promised Mexico would pay for the wall. It was one of his biggest applause lines at his campaign rallies. Mexico firmly refused to pay, and now Trump wants U.S. taxpayers to cover the costs.

Greg Walden, a senior House Republican, said on Twitter he was “deeply concerned about the precedent that this action sets.”

Republican Senator Thom Tillis said in a statement that Trump’ declaration was not a solution. He cited concerns about insufficient funding to secure the border, the prospect of litigation, “… and most concerning is that it would create a new precedent that a left-wing president would undoubtedly utilize to implement their radical policy agenda while bypassing the authority of Congress.”

Other Republicans, such as Senator Lindsey Graham, were supportive.

With an emergency formally declared, Trump left Washington to travel to his Mar-a-Lago golf resort in Florida for a holiday break.