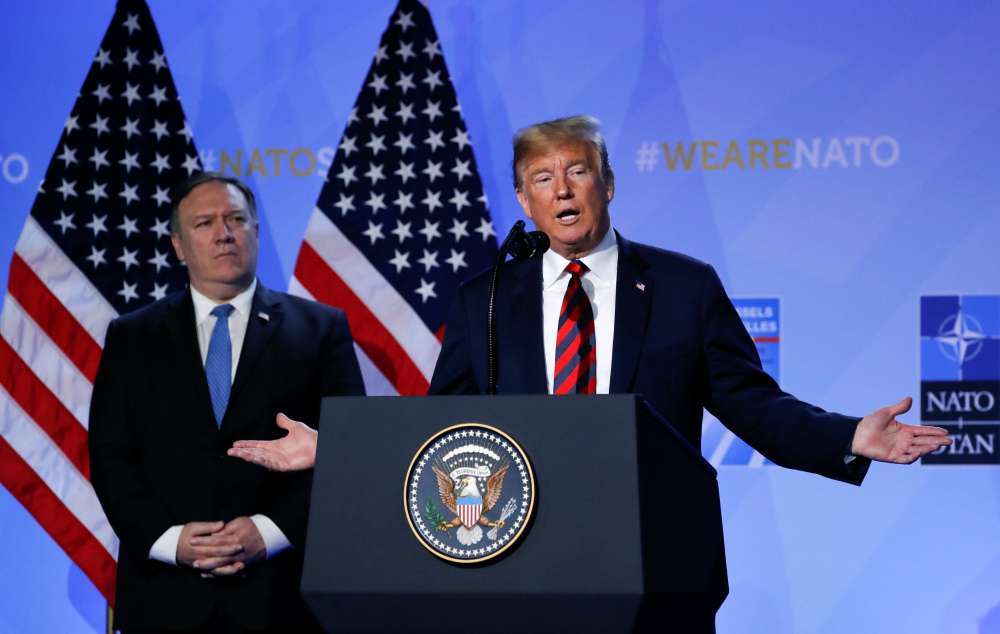 U.S. President Donald Trump hailed a personal victory at a NATO summit on Thursday, saying allies had sharply increased defence spending commitments after he provoked a crisis session with a tirade at European leaders.

“I told people that I would be very unhappy if they didn’t up their commitments,” an ebullient president told reporters after the second day of the Brussels meeting, when NATO leaders huddled with Trump to try to defuse a crisis.

“I let them know that I was extremely unhappy,” he said, but added that the talks had ended on the best of terms: “It all came together at the end. It was a little tough for a little while.”

Officials at the meeting said Trump had shocked many present and broke with diplomatic protocol by addressing German Chancellor Merkel by her first name, telling her: “Angela, you need to do something about this”. Most officials and the invited leaders of non-NATO Afghanistan and Georgia were ushered out.

Others in the room, including the Lithuanian president whose country is among the most nervous of Russian ambitions, denied a suggestion that Trump had threatened to quit the alliance.

When asked about that, Trump said he believed he could do that without Congressional approval but it was “not necessary”.

Instead, he said, the other 28 allies had agreed to increase their defence spending more quickly to meet a NATO target of two percent of their national income within a few years. The current commitment is to reach two percent by 2024 but with get-out terms that would allow some to stretch it out to 2030.

Trump stressed that NATO’s budget had been unfair to the United States but now he was sure it would be fair. Allies would be increasing spending by $33 billion or more, he added.

He also said he thought spending of 4 percent on defence — similar to the U.S. level — would be the right level.

“We have a very powerful, very strong NATO, much stronger than it was two days ago,” he said. Citing the alliance’s Secretary-General Jens Stoltenberg, he said: “Secretary Stoltenberg gives us total credit, meaning me, I guess, in this case, total credit. Because I said it was unfair.”

Merkel said: “We had a very intense summit.”

Trump had opened the first day of talks in Brussels on Wednesday with a public diatribe against Germany, the second biggest state in the Western defence alliance, criticising its reliance on Russian gas imports and failure to spend more on defence.

The mood had appeared to have calmed as the summit went into its second day, focusing on operations beyond Europe. But, several sources said, Trump instead reopened in strong terms his demand that other countries spend more immediately.

“The language was much tougher today,” one source told Reuters. “His harshest words were directed at Germany, including by calling her Angela –‘You, Angela.'”

As well as Merkel, Spanish Prime Minister Pedro Sanchez and Charles Michel, the prime minister of Belgium, were singled out by Trump for undershooting on their spending targets when U.S. taxpayers, funding a defence budget worth about 3.6 percent of their national income, foot much of NATO’s bills.