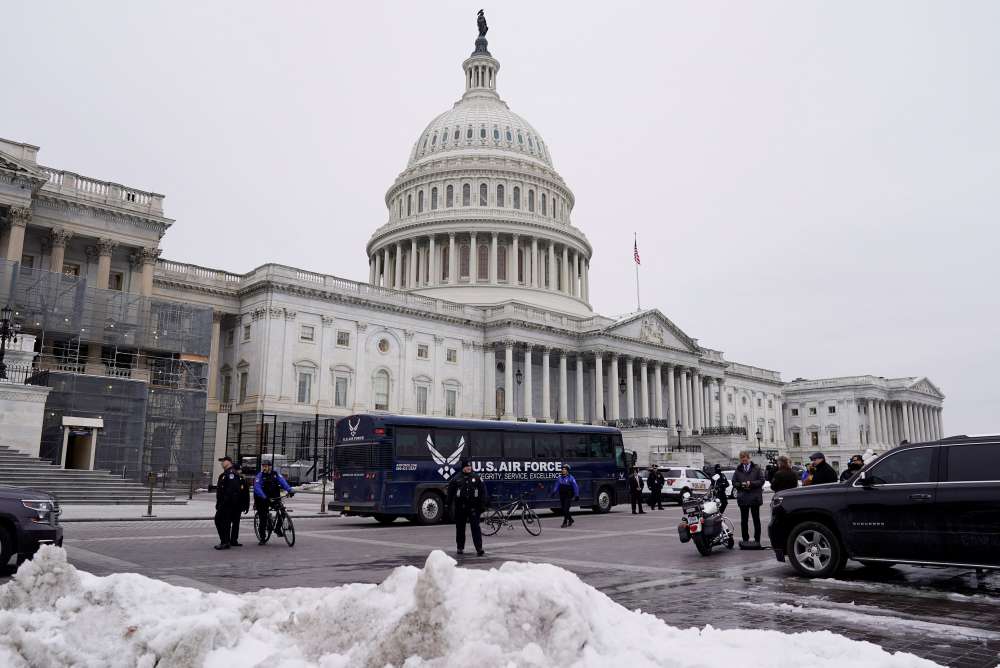 President Donald Trump’s conflict with Democrats over a partial U.S. government shutdown escalated on Thursday with Trump denying House Speaker Nancy Pelosi use of military aircraft for an overseas trip in apparent retaliation for her suggestion that he delay the annual State of the Union address.

The rising tension suggested that the shutdown, now in its 27th day, remains far from being resolved.

In the meantime, the Trump administration continued to try to mitigate the shutdown’s impact. The State Department said it would call its furloughed employees back to work next week for national security reasons.

Pelosi had been scheduled to travel on a military aircraft as part of a congressional delegation to Belgium, where NATO is based, and Afghanistan to visit American troops stationed there.

In a letter to Pelosi denying her delegation the use of a plane, the Republican president called the trip an “excursion” but the Democrat’s spokesman said the trip to the Afghanistan war zone was for security and intelligence briefings.

“In light of the 800,000 great American workers not receiving pay, I am sure you would agree that postponing this public relations event is totally appropriate,” Trump wrote.

He told Pelosi she could make the trip by flying commercial.

Trump’s intervention stopped the trip just as Pelosi and other lawmakers were about to travel.

White House Press Secretary Sarah Sanders said that in forcing Pelosi not to travel on a U.S. government jet, Trump had acted within his authority as commander in chief.

“He postponed her ability to use military air, which must be approved” by the Department of Defence, Sanders said.

A spokesman for Pelosi, Drew Hammill, said the trip to Brussels was intended “to affirm the United States’ ironclad commitment to the NATO alliance.”

The Afghanistan leg of the trip would have obtained “critical national security and intelligence briefings from those on the front lines,” Hammill said.

A House Democratic aide, speaking on condition of anonymity, told Reuters that details of the trip were not supposed to be revealed for security reasons, as is customary. The White House, however, made the letter to Pelosi detailing the itinerary public.

A U.S. defence official, speaking on condition of anonymity, said Pelosi had requested and been granted Defence Department support for overseas travel, although the president has the authority to cancel Pelosi’s travel.

At the Capitol, members of the delegation had already boarded a bus bound for Joint Base Andrews just outside Washington, from which the plane was set to depart, when news of Trump’s decision broke.

It appeared to be a response to a letter Pelosi sent to Trump on Tuesday, suggesting he delay the annual State of the Union address to Congress, scheduled for Jan. 29, to some point after the government reopens.

Pelosi cited concerns over the capacity of the Department of Homeland Security and the Secret Service to safeguard the Capitol during the event. The agency later said it was capable of securing the venue.

Trump’s action drew criticism from one of his Republican allies in the Senate. “One sophomoric response does not deserve another,” Republican Senator Lindsey Graham wrote on Twitter.

He criticised Pelosi’s move on the State of the Union as “blatantly political” but said, “President Trump denying Speaker Pelosi military travel to visit our troops in Afghanistan, our allies in Egypt and NATO is also inappropriate.”

“The president’s comment that lawmakers visiting Afghanistan is a ‘public relations event’ is an insult to the brave men and women serving in harm’s way,” Luria said.

Also on Thursday, the State Department said it would recall its employees and take steps to pay them salaries – a departure from other agencies.

“As a national security agency, it is imperative that the Department of State carries out its mission,” Deputy Under Secretary of State Bill Todd said in a statement. “We are best positioned to do so with fully staffed embassies, consulates and domestic offices.”

Todd said the department’s employees would be paid on Feb. 14 for work performed beginning on or after this coming Sunday. The department would review its available funds and “legal authorities” beyond the upcoming pay period to try to cover future payments, he said.

About one quarter of federal agencies have been shuttered since Dec. 22, with Democratic lawmakers refusing to accede to Trump’s demands to pay for a wall along the U.S. border with Mexico.

Trump is holding out for $5.7 billion for a border wall. Democrats, who took over the U.S. House of Representatives this month, have rejected his demands, saying there are cheaper, more effective ways of enhancing border security.

Before leaving for the weekend, the House passed another bill that would fund the government through Feb. 28, but the vote was later vacated and held over until next week after a procedural objection from Republicans.

The Senate, however, has refused to bring any funding bill to the floor for a vote that Trump does not support.