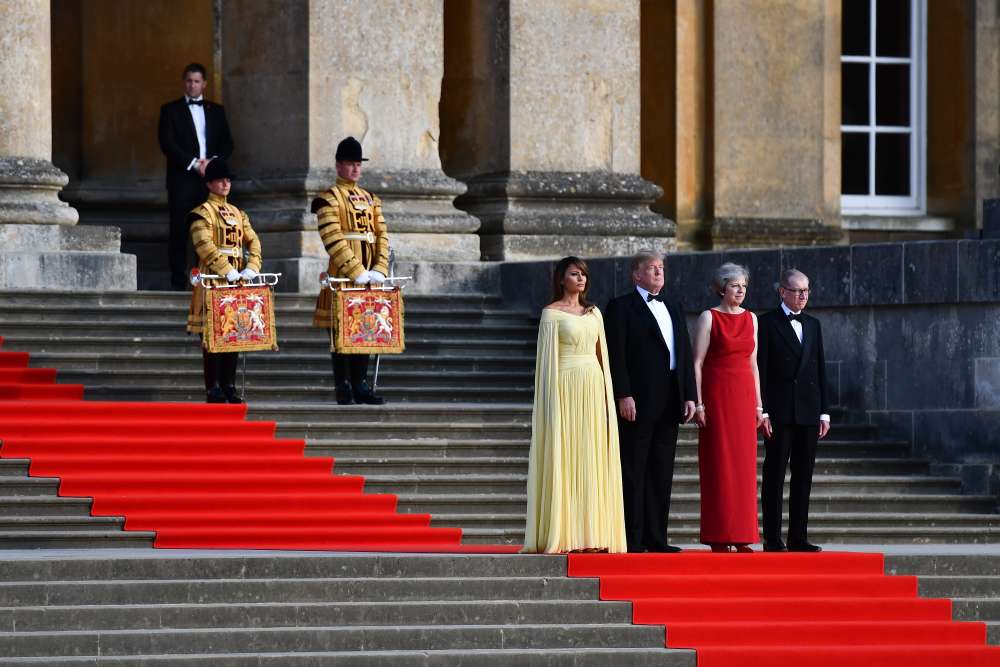 U.S. President Donald Trump said a free trade deal with Britain might be impossible if London went ahead with Prime Minister Theresa May’s proposals for post-Brexit ties with the European Union, in damaging remarks that could widen domestic criticism of her plans.

In an interview with Britain’s Sun newspaper published late on Thursday, Trump said May’s plans for a business-friendly Brexit would leave it too close to the EU to allow a new trans-Atlantic trade deal to be struck.

Just hours earlier at a lavish dinner to mark Trump‘s first visit to Britain as president, May made a direct pitch for a deal with Washington. She praised the friendship between the two allies, glossing over Trump‘s previous remarks that Britain was a “hot spot” in turmoil over Brexit.

Referring to May’s Brexit proposals, Trump told the Sun, Britain’s top-selling newspaper: “If they do a deal like that, we would be dealing with the European Union instead of dealing with the UK, so it will probably kill the deal.”

Trump chastised May for ignoring his advice on Brexit and not making a credible threat to walk away from talks.

“I would have done it much differently,” he told the Sun, which urged its readers to back Brexit before a referendum in June 2016. “I actually told Theresa May how to do it, but she didn’t listen to me.”

His comments came at the end of a tumultuous few days for May, during which two senior ministers resigned in protest at her plans for trade with the EU after Britain leaves the bloc next March.

Trump said that one of them, former Foreign Secretary Boris Johnson, “would be a great Prime Minister.”

After the story was published, White House spokeswoman Sarah Sanders said the president “likes and respects Prime Minister May very much,” adding that he said in the interview she “is a very good person,” and that he “never said anything bad about her.”

Trump is due to have lunch with May on Friday. Her office had no immediate reaction to his remarks, beyond referring back to her speech.

May has previously said she does not believe her Brexit plans should rule out a trade deal with the United States.

Trump has frequently angered British politicians. Late last year, May criticised him for retweeting a message by a member of a British far-right group and the speaker of Britain’s parliament has saidTrump would not be welcome to address it.

May’s critics have said, however, that she reins in criticism of Trump because of the strong desire of many in her Conservative Party to reach a trade deal with the United States after Brexit.

May’s “business-friendly” Brexit plan would keep Britain in a free trade zone for goods with the EU but mean it had to accept some EU rules. It was agreed by her Cabinet only last Friday after two years of wrangling since Britons voted to leave the bloc in the referendum.

Some Brexit supporters have cast May’s Brexit plan as a betrayal, including lawmakers in her own deeply divided party who have warned of a leadership challenge.

Before the Sun interview was published, May invoked Winston Churchill as she addressed Trumpand business leaders at a black-tie dinner at Blenheim Palace, the grand 18th century country house that was the birthplace of the British World War Two leader.

“Mr. President, Sir Winston Churchill once said that ‘to have the United States at our side was, to me, the greatest joy’,” May told Trump, according to a text of her speech.

“The spirit of friendship and cooperation between our countries, our leaders and our people, that most special of relationships, has a long and proud history,” she said, adding that the United States was “not just the closest of allies but the dearest of friends”.

Outside the mansion, near Oxford to the northwest of London, a couple of thousand demonstrators lined the road and booed Trump‘s arrival. It was one of over a hundred protests police expected during Trump‘s four-day trip.

“I think it’s a travesty of British values. How can we roll out the red carpet for someone who stands for everything we stand against?” said academic Emily Jones, 40, one of those protesting outside Blenheim Palace.

While Trump‘s trip was not the full state visit he was originally promised, he was heralded by military bands on his arrival in the country and at Blenheim, and he is scheduled on Friday to have tea with Queen Elizabeth.

He is then due to spend two days at golf courses he owns in Scotland before travelling to meet Russian President Vladimir Putin.

The Sun said its interview with Trump was conducted in Brussels, where the NATO summit was held earlier in the week. Trump attended the summit, where he provoked a crisis session to force allies to raise their defence spending.

Liam Fox, Britain’s trade minister, tweeted after the Sun interview was published that it was terrific to hear Trump “talk so positively about UK & US Trade tonight at Blenheim Palace”.