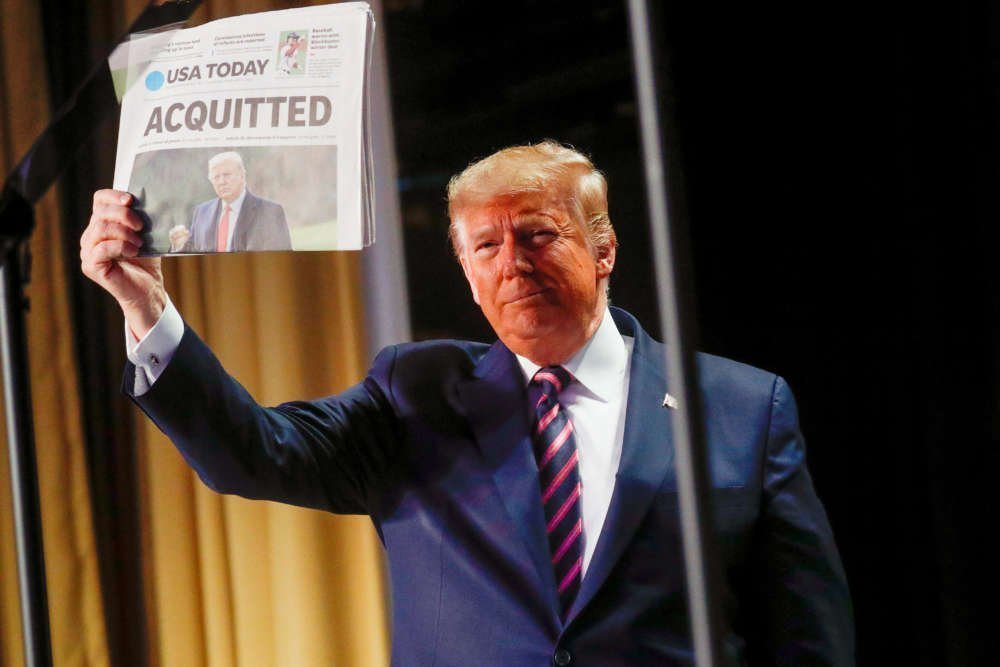 President Donald Trump, facing a bruising re-election campaign and possible further investigations in Congress, on Thursday called the Democrats who pursued his impeachment “dishonest and corrupt” and accused some of his political foes of invoking religious faith to justify wrongful acts.

The Republican president’s comments at the annual National Prayer Breakfast event in Washington were his first public remarks since the Republican-controlled Senate acquitted him one day earlier in his historic impeachment trial on charges brought by the Democratic-led House of Representatives.

“As everybody knows, my family, our great country and your president have been put through a terrible ordeal by some very dishonest and corrupt people,” Trump said after receiving a long ovation.

“They have done everything possible to destroy us – and by so doing very badly hurt our nation. They know what they are doing is wrong but they put themselves far ahead of our great country,” Trump said.

On largely party-line votes, the Senate acquitted Trump on Wednesday of charges of abuse of power and obstruction of Congress, keeping him in office.

Trump is running for re-election on Nov. 3. Trump, who has strong support from evangelical Christians and conservative Catholics, also faulted some of his opponents for invoking their religious faith during the impeachment battle. Trump did not mention anyone by name.

House Speaker Nancy Pelosi, a Catholic who launched the impeachment inquiry in September, said in December that she does not hate Trump and that she prays for him. Republican Senator Mitt Romney, a Mormon, cited his religious faith when he voted to convict Trump on a charge of abuse of power on Wednesday. Romney was the only Republican to vote for conviction. No Democrat voted to acquit.

Trump smiled as he arrived at the event and held up copies of newspapers with headlines announcing his acquittal. He avoided greeting Pelosi, who sat steps away on the other side of the dais.

Trump is scheduled to make a public statement about his acquittal at the White House at noon (1700 GMT). It will be a “vindication speech,” a source close to the president said on Wednesday, combining some magnanimity with an “I told you so” tone.

Senate Republicans voted to acquit Trump of abuse of power for pressing Ukraine to investigate political rival Joe Biden, a contender for the Democratic presidential nomination, and of obstructing a congressional investigation of the matter.

The acquittal was Trump’s biggest victory yet over his Democratic foes in Congress, who complained bitterly about Senate Republicans’ refusal to call witnesses or seek new evidence at the trial.

“This vote is no vindication, it’s no real acquittal, it’s no victory,” Senator Richard Blumenthal said. “It’s meaningless in terms of guilt or innocence because the American people will draw their own conclusion from what they saw.”

After the vote, Democrats were uncertain about their next steps in investigating Trump. There are several pending court cases related to Democratic efforts to get more information from Trump, and Pelosi issued a statement saying the House of Representatives would protect the Constitution “both in the courts of law and in the court of public opinion.”

But Democrats would not say whether they would subpoena John Bolton, Trump’s former national security adviser, to testify to House committees. Senate Republicans rejected Democratic efforts to subpoena Bolton to testify during the trial.

“We’ve made no decisions about any next steps,” Representative Adam Schiff, the lead House prosecutor in the impeachment trial, told PBS’ “NewsHour” programme.

Senate Majority Leader Mitch McConnell, speaking to reporters after the vote, accused Democrats of using impeachment to try to gain an advantage in November’s elections for control of the Senate. He called the effort “a colossal political mistake.”

Democrats expressed concern an acquittal would encourage a president who already challenges political norms, painting him as a threat to U.S. democracy and a demagogue who has acted lawlessly.

Eleven Democrats are vying for the right to challenge Trump in the November election, but Trump heads into the campaign with the advantages of a powerful fundraising machine and near universal support from Republicans.

Trump’s job approval ratings have remained fairly consistent throughout his presidency and the impeachment process as his core conservative supporters – especially white men, rural Americans, evangelical Christians and conservative Catholics – stuck with him.

By In Cyprus
Previous articleCBC head assures MPs info on PEP red loans will be handed over
Next articlePaphos: €800 fine, 5 points for speeding in residential area