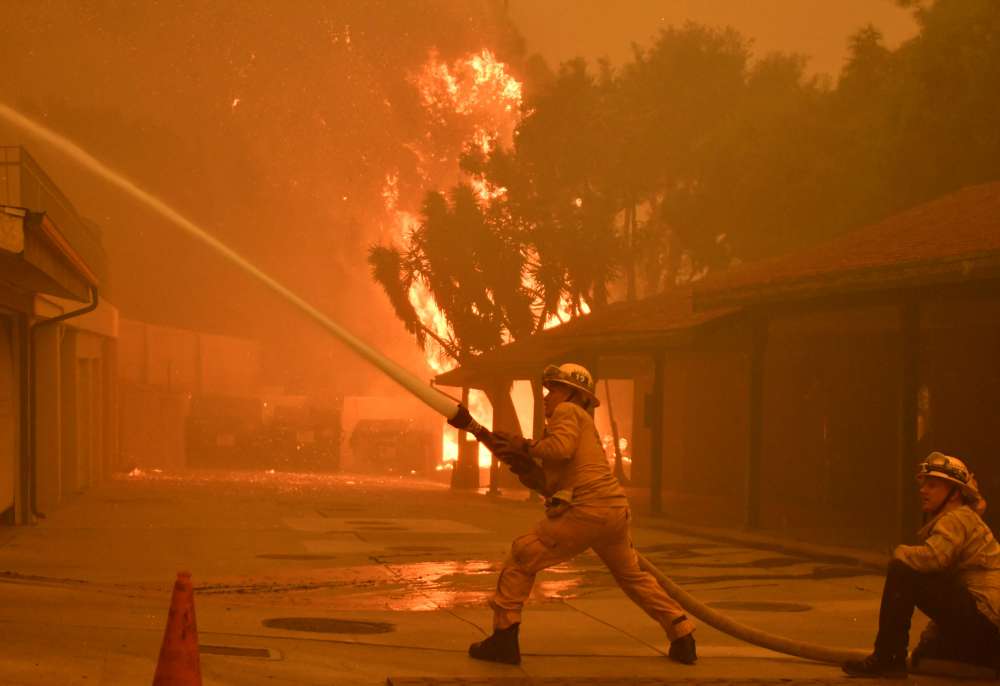 U.S. National Guard troops fanned out to scour the ruins of the devastated town of Paradise on Thursday for remains of victims as 130 people remained listed as missing in California’s deadliest wildfire on record, whose death toll has risen to 56. The “Camp Fire” blaze last Thursday incinerated the Sierra foothills town, once home to 27,000 people. Most of the missing in and around Paradise, which lies about 175 miles (280 km) north of San Francisco, are aged over 65.

Authorities fear that in the crush to flee the fast-approaching flames, some elderly residents may have been left behind.

The surface area of the fire had grown to 138,000 acres (56,000 hectares) by late Wednesday evening, even as diminished winds and rising humidity helped firefighters shore up containment lines around more than a third of the perimeter.

More than 9,000 firefighters and other personnel from many U.S. states are fighting the Camp Fire and the “Woolsey Fire” hundreds of miles to the south.

Paradise’s ghostly expanse of empty lots covered in ash and strewn with twisted wreckage and debris made a strong impression on Governor Jerry Brown, U.S. Interior Secretary Ryan Zinke and other officials who toured the devastation on Wednesday and were due to visit the scene of the Woolsey Fire on Thursday.

Given the scale of the destruction in Paradise, some residents are weighing whether they can ever return.

“At this point, I’m taking it day-to-day,” Jeff Hill, who has been staying with relatives in nearby Chico since his home burned down, told NBC News. “There are no stores left, no restaurants, nothing.”

“It’s not even habitable,” he added.

At an evacuation center south of Paradise in Oroville that is so full that some people are sleeping in cars or tents, Nanette Benson, said her future is uncertain.

“We don’t know where the hell we’re going to go,” she told KRCR TV.

Paradise’s police department has stepped up patrols of the remains of the town after arresting three people on chargers of looting. Then department is reliant on equipment from other police departments and is running off a generator, Sergeant Steve Bertagna told KRCR TV.

Thirteen of the department’s 30 officers have lost their homes, KRCR TV said.

The blaze, fueled by thick, drought-desiccated scrub, has capped two back-to-back catastrophic wildfire seasons in California that scientists largely attribute to prolonged drought that is symptomatic of climate change.

Authorities attributed the high number of casualties to the staggering speed with which the fire struck Paradise. Wind-driven flames roared through town so swiftly that residents were forced to flee for their lives.

Although the high winds that fueled the fires have eased, Ken Pimlott, director of the California Department of Forestry and Fire Protection (Cal Fire), told reporters late Wednesday that vegetation around the Camp Fire remained “critically dry.”

“We still have conditions that could produce new and damaging fires,” he said. “We are not letting out eye off this ball at all.”

Lawyers for some wildfire victims claimed in a lawsuit filed this week that lax equipment maintenance by an electric utility caused the fire, which officially remains under investigation.

The Butte County disaster coincided with blazes in Southern California, especially the Woolsey Fire, which has killed at least two people, destroyed more than 500 structures and displaced 200,000 people west of Los Angeles.

The Los Angeles County Sheriff’s Department said the body of a possible third victim was found. Cal Fire officials said that blaze was 52 percent contained as of Wednesday night.

The remains of eight more fire victims were found on Wednesday, raising the official number of fatalities to 56, nearly double the previous record from a single wildfire in California – 29 people killed by the Griffith Park fire in Los Angeles in 1933.

The Camp Fire also stands as one of the deadliest U.S. wildfires since the turn of the last century. More than 80 people perished in the Big Burn firestorm that swept the northern Rockies in August 1910, consuming 3 million acres.

By In Cyprus
Previous articleCash outflows from Cyprus reach 490 million euro in 2017, according to Eurostat
Next articleUK ministers quit over draft Brexit deal, pound and bank stocks tumble