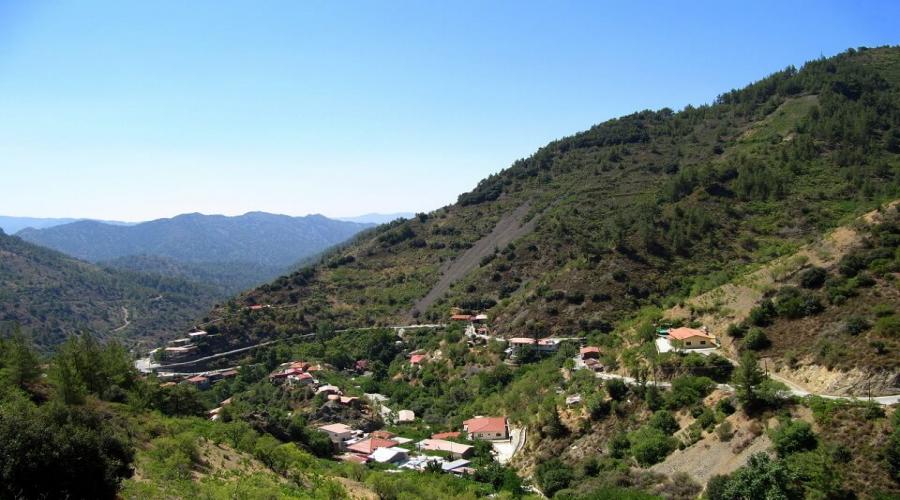 Ten Byzantine period churches from Troodos are listed UNESCO World Heritage Sites: Stavros tou Ayiasmati, Panayia tou Araka, Timios Stavros at Pelendri, Ayios Nikolaos tis Stegis, Panayia Podithou, Panayia Asinou, Ayios Ioannis Lambadistis, Panayia (Moutoulla), Archangelos Michael at Pedoulas and Sotiros at Palaichori.
The imposing Troodos mountain range raises its highest peak to 1951m above sea level and stretches across most of the southern and western part of Cyprus. This tranquil region provides a cool refuge for long walks in the summer among idyllic pine scented forests. Covered in snow in winter, it offers an opportunity for skiing and other winter sports.
Nestled in the Troodos mountains are some of the most beautiful hill resorts of the island, with mountain streams, Byzantine monasteries and picturesque villages built on terraced hillsides. The Troodos area has been renowned since antiquity for its rich mines. In Byzantine times it became a centre for art, as monks and ordinary citizens built churches and monasteries far from the Arab raids that threatened coastal areas. The Cyprus Tourism Organisation, in cooperation with the Forestry Department, has issued a publication with information on various nature trails, many in the Troodos area. Besides the Machairas region to the east and the Troodos proper region surrounding the tallest peak of Mount Olympos (1951m), there are four other distinct regions, each with its own character and charm. These regions are the Pitsilia area to the east of Mount Olympos, the Solea Valley to the north, the Marathasa valley to the west and the Krasochoria region to the south (the northwestern part of Limassol district).

Troodos Visitor Centre is situated 200m west of Troodos Square. It is the first of its kind in Cyprus and provides information about the Troodos National Park, its importance in the development of the region, the various facilities and activities available here, as well as information about the mountain environment in general. The Centre has a reception area with information on the geology, flora and fauna of the Troodos mountain range. There is also a nature trail where one can see a good sample of various plants and rock formations of the region.