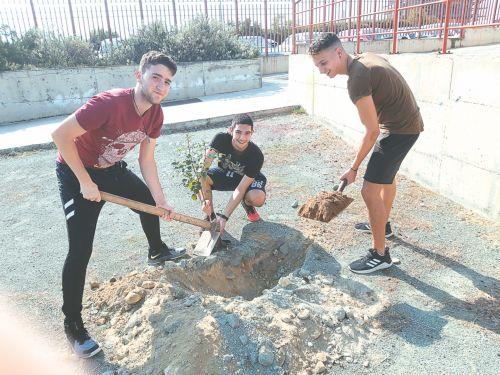 Students of Latsia High School were excited to participate in their school’s first official tree planting initiative as part of wider efforts to create greener cities, villages and neighbourhoods.

The event is part of the Ministry of Education’s programme “Greening the School, Greening My Neighbourhood” and during this time, 100 carob trees offered by the University of Cyprus were planted in the schoolyard and around the school.

“Such events aim to boost the green element in the school environment, and the Latsia High School initiative is a good one because it bolsters the school’s synergy with the local community in an effort to strengthen environmental awareness and action, not only by pupils but also by the local community in general, on issues related to the protection of the local environment, which has implications on a wider,  universal level,” said Dr. Aravella Zacharia, Head of Educational Unit for the Environment and Sustainable Development at the Ministry of Education.

“We are talking about an effort to support the planting of Mediterranean plants of Cyprus and carob trees have been the main specimens of Mediterranean vegetation on our island over centuries,” she said.

Within the framework of the programme, similar events are expected to take place in 100 schools throughout Cyprus this year and then the programme will be gradually expanded to cover as many schools as possible.

The event took a social character hence after the tree planting, pupils along their teachers and parents shared snacks and drinks.

The event was  also attended by the Rector of the University of Cyprus Tassos Christofides, the President of the European Delegation to Cyprus Ierotheos Papadopoulos, the Mayor of Latsia Christos Pytaras, the deputy mayor Yeri Marios Savasouvas, the Chairman of the School Board of Latsia Costas Vasiliou and Zacharia on behalf of the Ministry of Education.