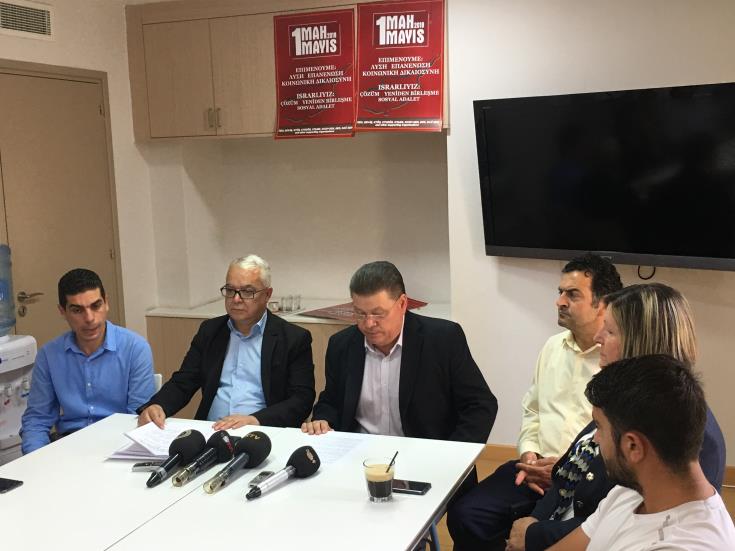 Greek Cypriot and Turkish Cypriot trade unions called on Thursday on both leaders in Cyprus – President of Cyprus Nicos Anastasiades and Turkish Cypriot leader Mustafa Akinci – to rise to the occasion and resume settlement talks on the island the soonest possible.

In a joint declaration ahead of May Day celebrations, trade unions PEO, DEV-IS, KTAMS, KTOS, KTOEOS, BES, KOOP-SEN, DAU-SEN also say that convergences to date need to be preserved, in line with the parameters set by the UN Secretary General Antonio Guterres. The joint deceleration was read in Greek by PEO Secretary General Pambis Kyritsis and in Turkish by DEV-IS President Hasan Felek, during a press conference this morning at the Home for Cooperation, in the Nicosia buffer zone.

Bicommunal talks are the only way for the two communities to reach a settlement that reunites Cyprus and turns it into a free, independent and demilitarized country, that is the common home of all Cypriots, trade unions say. They also reaffirm their commitment to a bizonal bicommunal federation in Cyprus, that is a single state with a single sovereignty, nationality and international personality, and with political equality for the two communities, as described in relevant UN resolutions.

Moreover, they underline that stagnation in the Cyprus problem is “dangerous” and to the detriment of the Cyprus people in their entirety. This year again, trade unions, which are members of the World Federation of Trade Unions, plan to celebrate May Day with a joint event in the Nicosia buffer zone, opposite Ledra Palace, under the slogan “We insist: Solution, Reunion, Social Justice”. The event will start at 7.30pm local time (4.30pm GMT) on May 1st.

Cyprus has been divided since 1974, when Turkish troops invaded and occupied its northern third. Repeated rounds of talks, under UN auspices, have yielded no concrete result.