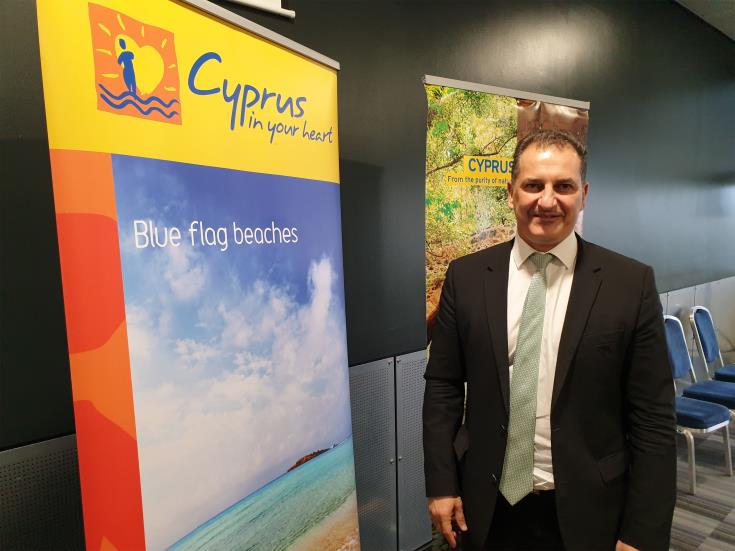 The Minister for Energy, Commerce, Industry and Tourism Yiorgos Lakkotrypis concluded on Tuesday afternoon a two-day series of meetings with major tour operators and airlines within the framework of the annual World Travel Market in London. In a press conference he stated his overall satisfaction both with performance of Cypriot tourism in 2018 and with the results of these meetings.

The Minister noted that the London exhibition has a special significance for Cyprus, as at the end of the current year the country will have attracted 1.3m visitors from the UK, one third of the total of about 4 million tourists.

He said that following the meetings the Cypriot delegation had had, the sense is that tour operators and airlines are confident that despite the uncertainty over Brexit, Cyprus will retain the numbers of inbound tourism from the UK at about the same level, with an upward trend.

“We are delighted by the fact that in a mature market such as the British one we can maintain our share of it and maybe even increase it. It is quite significant,” commented the Minister.

Lakkotrypis also said that he and the senior management of the Cyprus Tourism Organisation had the opportunity to update the tour operators and the airlines on the future plans for Cypriot tourism, such as the founding of the Ministry of Tourism which will start operating from 2nd January 2019, as well as the progress of major investments, like the new marinas, golf courses and the casino resort.

Asked about the revenue from tourism in 2018 the Minister said that it is expected to reach 2.7bn euros. “It is an increase; not as big as the arrivals, but the primary goal has been to recapture the share of the market we had lost over the previous 10 or 15 years. Truth be told, we had lost our competitiveness. The national tourism strategy 2030 stipulates that once we have regained our share of the market we will turn to higher quality tourism, which of course requires an upgraded tourism product,” said Lakkotrypis.

Asked about the optimism for 2019 given that a no-deal Brexit scenario is very much alive, the Tourism Minister identified and analysed three potential risks from a hard Brexit.

The second risk, judged to be “the most serious one” is the possibility of a devaluation of pound sterling, which would decrease potential British tourists’ spending power.

Thirdly, the risk of problems in allowing entrance in each other’s countries, as the UK would likely be considered a third country in a no deal Brexit scenario. Minister Lakkotrypis  also dismissed this possibility as “almost nil”.

The Minister also stressed that the positive results of Cypriot tourism in 2018 occurred despite the recovery of competitive markets in the region which functioned “in full capacity.”