Three Russians, one Ukrainian accused of 2014 downing of flight MH17 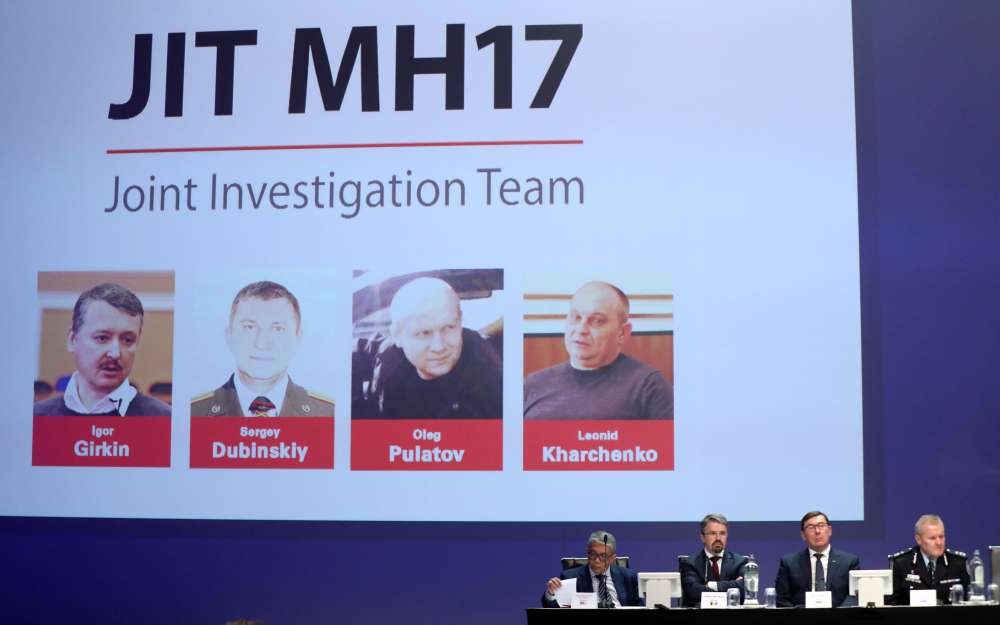 Three Russians and a Ukrainian will face murder charges for the July 2014 downing of Malaysia Airlines flight MH17 over eastern Ukraine in which 298 people were killed, in a trial to start in the Netherlands next March, an investigation team said on Wednesday.

The suspects are likely to be tried in absentia, however, as the Netherlands has said Russia has not cooperated with the investigation and is not expected to hand anyone over.

The Dutch-led international team tasked with assigning criminal responsibility for the plane’s destruction named the four suspects as Russians Sergey Dubinsky, Oleg Pulatov and Igor Girkin, and Ukrainian Leonid Kharchenko. It said international arrest warrants for the four have been issued.

MH17 was shot out of the sky on July 17, 2014, over territory held by pro-Russian separatists in eastern Ukraine as it was flying from Amsterdam to the Malaysian capital Kuala Lumpur. Everyone on board was killed.

Most of those on board were Dutch. The joint investigation team formed by Australia, Belgium, Malaysia, the Netherlands and Ukraine found that the plane was shot down by a Russian missile.

Last year Russian President Vladimir Putin called MH17’s downing a “terrible tragedy” but said that Moscow was not to blame and that there are other explanations for what happened.

The governments of the Netherlands and Australia have said they hold Russia legally responsible.

Asked if she expected the suspects to attend the trial, Silene Fredriksz, whose son Bryce was on the plane with his girlfriend Daisy, said: “No. No, I don’t think so. But I don’t care. I just want the truth, and this is the truth.”

Moscow has said it does not trust the investigation.

“Russia was unable to take part in the investigation despite expressing an interest right from the start and trying to join it”, Kremlin spokesman Dmitry Peskov told reporters earlier on Wednesday.

The investigation team said Girkin was a former FSB colonel who served as minister of defence of the Donetsk People’s Republic (DNR) in the summer of 2014.

The team said it would ask the Russian government to allow it to question the suspects who are currently in Russia. It said Kharchenko was thought to be in Ukraine at the moment.

Prosecutors have previously said the missile system that brought down the plane came from the Russian 53rd Anti-Aircraft Brigade, based in the western Russian city of Kursk.

By In Cyprus
Previous articleEx-Romanian PM elected head of European centrist group with Macron’s blessing
Next article2018 AIC per capita in Cyprus at 94%, GDP per capita at 87% of EU average