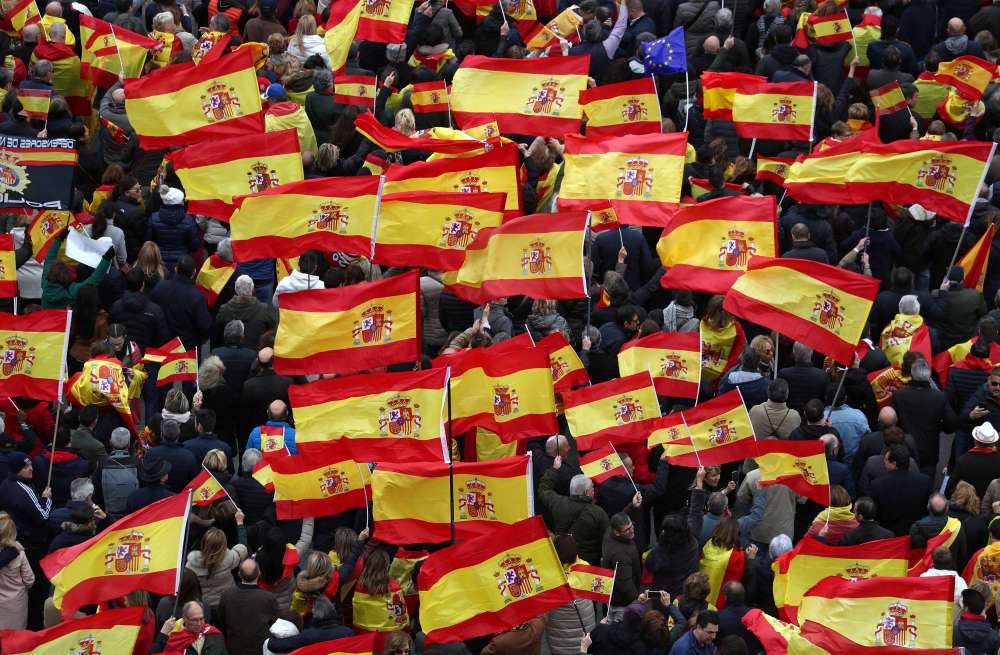 Thousands of people demonstrated in Madrid on Sunday against Spanish Prime Minister Pedro Sanchez’s proposed talks to ease political tensions in Catalonia, in a protest organised by centre-right and far-right opposition parties.

Demonstrators waving Spanish flags filled the Plaza de Colon in the city centre in the largest protest Sanchez has faced, with their slogan “For a united Spain, elections now!” a reminder of the pressure on his minority government.

The Socialist government’s proposal last Tuesday to appoint a rapporteur in talks among political parties to address the Catalan independence crisis galvanized the opposition, which has deemed it a betrayal and a surrender to pressure from Catalan separatists. The opposition has called for early elections.

Sanchez, who replaced a conservative government last June, holds just a quarter of the seats in parliament and relies on backing from anti-austerity party Podemos, Catalan nationalists and other small parties to pass laws.

The government faces a key vote next Wednesday on its 2019 budget proposal, which will likely fail without the support of Catalan parties. But those parties have said their vote for the budget is conditional on the Catalan talks including the issue of independence, something the government will not include.

Failure by parliament to approve the budget bill could prompt a snap election before the next scheduled vote in 2020.

“The time of Sanchez’s government has ended,” Popular Party leader Pablo Casado said at the protest.

Sanchez said on Saturday that the gathering would show a “Spain in black and white that simply proposes to go backwards.”

Ana Puente, a 73 year-old retiree, said she was protesting for a “united Spain”.

“The government is giving many things to supporters of Catalan independence and is going to break Spain apart,” said Raquel García, 76, who was carrying a Spanish flag.

The protest took place two days before the start of the trial of 12 Catalan independence leaders, who face up to 25 years in prison on charges of rebellion and misuse of public funds for their role in a failed secession bid from Spain that they are accused of spearheading in 2017.

The government is squeezed on both sides of the Catalan issue: Deputy Prime Minister Carmen Calvo said on Friday talks were on track to fail because Catalan pro-independence groups had rejected the government’s proposed framework. The Catalan groups want a referendum on independence included on the agenda, which Madrid will not accept.

Recent opinion polls have shown the Popular Party, Ciudadanos and Vox could win a majority of seats in parliament if elections were held, allowing them to replace the Socialist government.