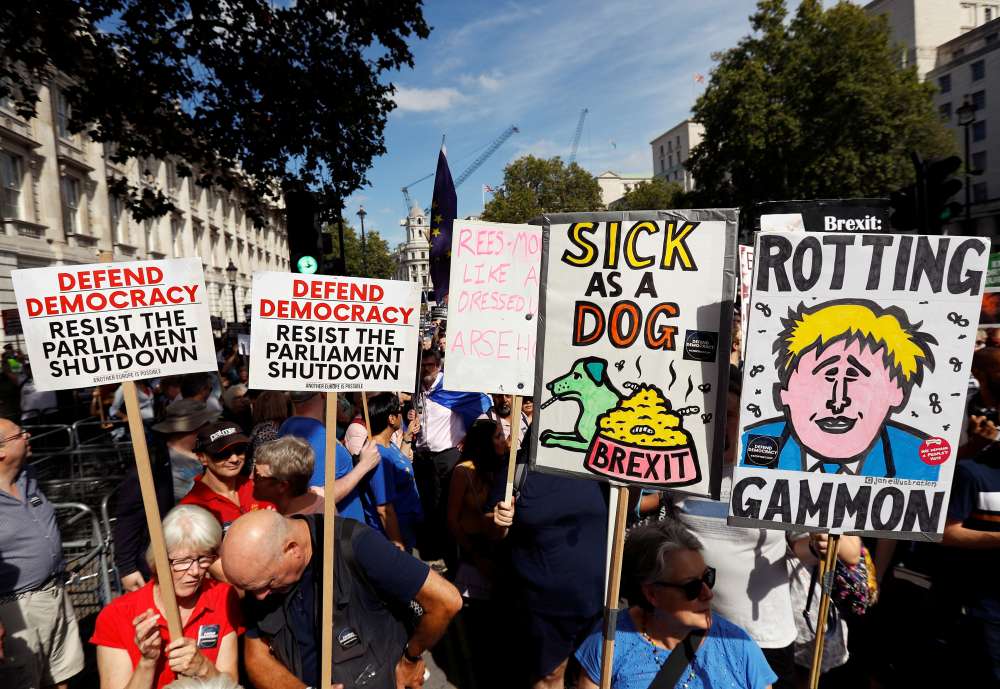 Thousands of people across Britain and Northern Ireland protested on Saturday against Prime Minister Boris Johnson’s decision to suspend parliament for about a month before the deadline for the country to leave the European Union.

Johnson has pledged to take Britain out of the EU on Oct. 31 with or without a deal on future relations with the bloc. The move to shut parliament for around a month in the period before that will hinder efforts by his opponents to stop him.

About 2,000 people gathered outside his office in Downing Street, chanting: “Liar Johnson, shame on you!”

A sign read: “#StopTheCoup. Defend our Democracy. Save our future.” 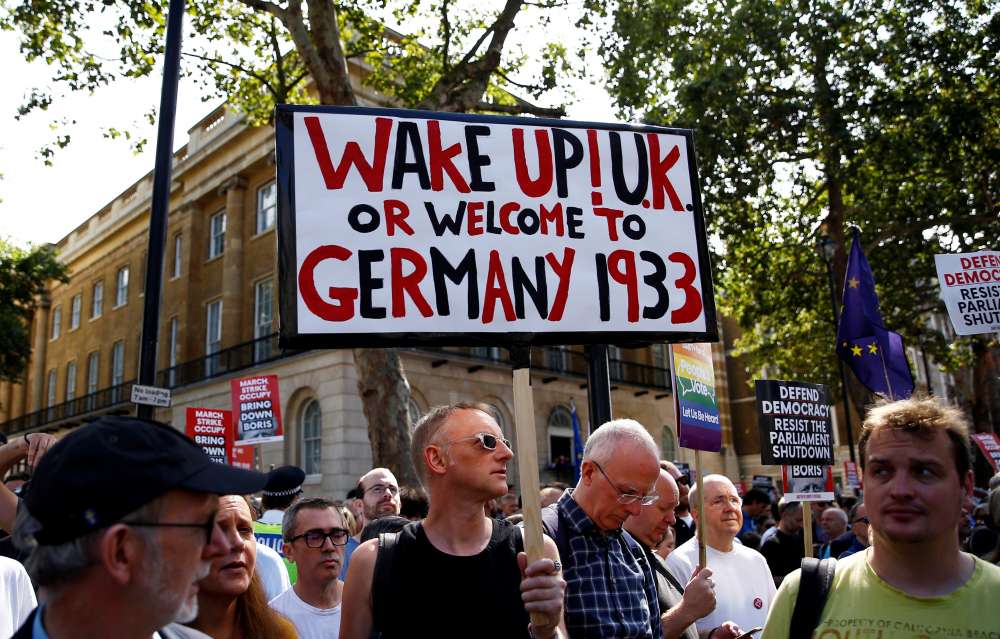 The government says it is usual for parliament to be suspended before a new prime minister outlines his policy programme in a Queen’s speech, now scheduled for Oct. 14. His supporters also say parliament usually breaks in late September, when the main political parties hold their annual conferences.

But his critics say the suspension, known as a prorogation, is unusually long and describe the move as a thinly veiled attempt to reduce the time that lawmakers will have to debate before Britain leaves the EU at the end of October.

Opposition lawmakers want to prevent the shutdown of parliament and pass legislation to avoid a no-deal Brexit when they return from summer recess on Tuesday.

As well as London, protests were scheduled in other major cities in the four nations of the United Kingdom, comprising England, Scotland, Wales and Northern Ireland. 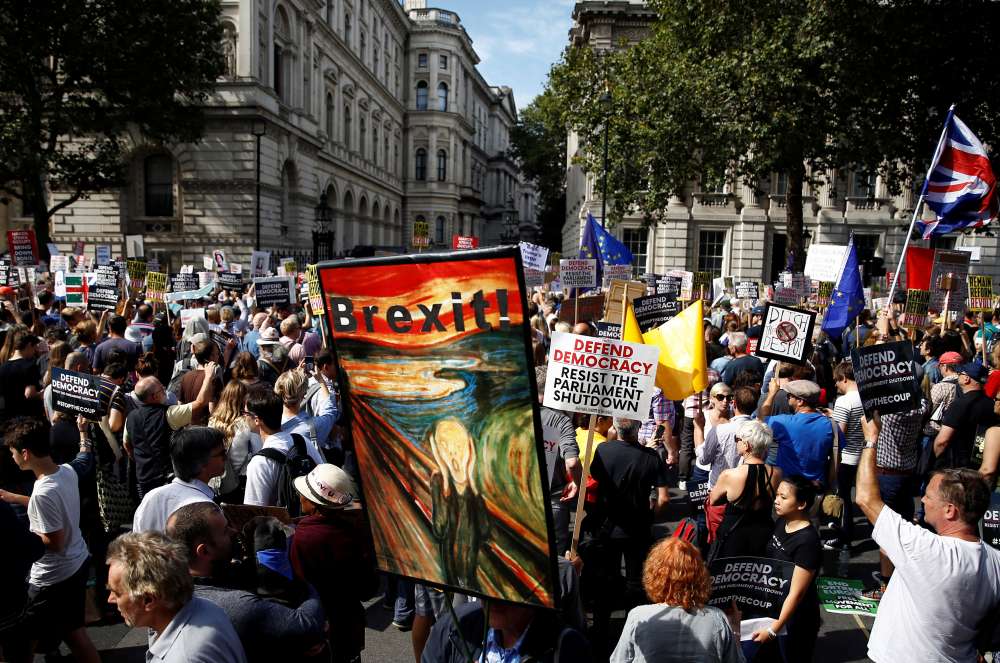 About 100 people protested outside the city hall in Belfast, the capital of the Northern Ireland, which has become a particular focus in the Brexit negotiations as it has the United Kingdom’s only land border with the European Union.

The “backstop” insurance policy, part of the withdrawal agreement negotiated between the EU and Britain’s former prime minister and which aims to keep the border with Ireland open, has become the main sticking point in negotiations.

Johnson wants the backstop removed, saying it could leave Northern Ireland operating under different regulatory rules than the rest of the United Kingdom. The EU and Ireland say Britain has yet to come up with acceptable alternatives.

A court case being heard in Belfast next week aims to block Johnson’s suspension of parliament on the grounds that a no-deal Brexit would breach the 1998 Good Friday Agreement that brought peace to the British-run province of Northern Ireland.

Protesters said the government had failed to take into account the importance of the border issue.

“The thing that scares me most is they have no appreciation of what is important for Northern Ireland. We are not on their radar,” said Graham Glendinning, 49, a software worker.

“The border means nothing to them and they don’t give two hoots about it.” 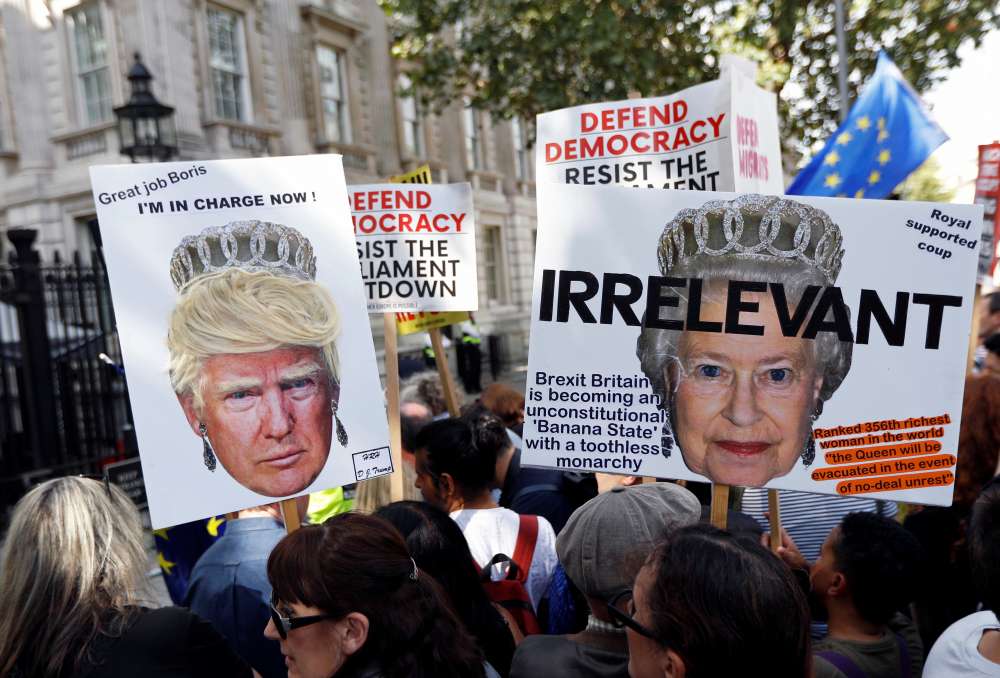