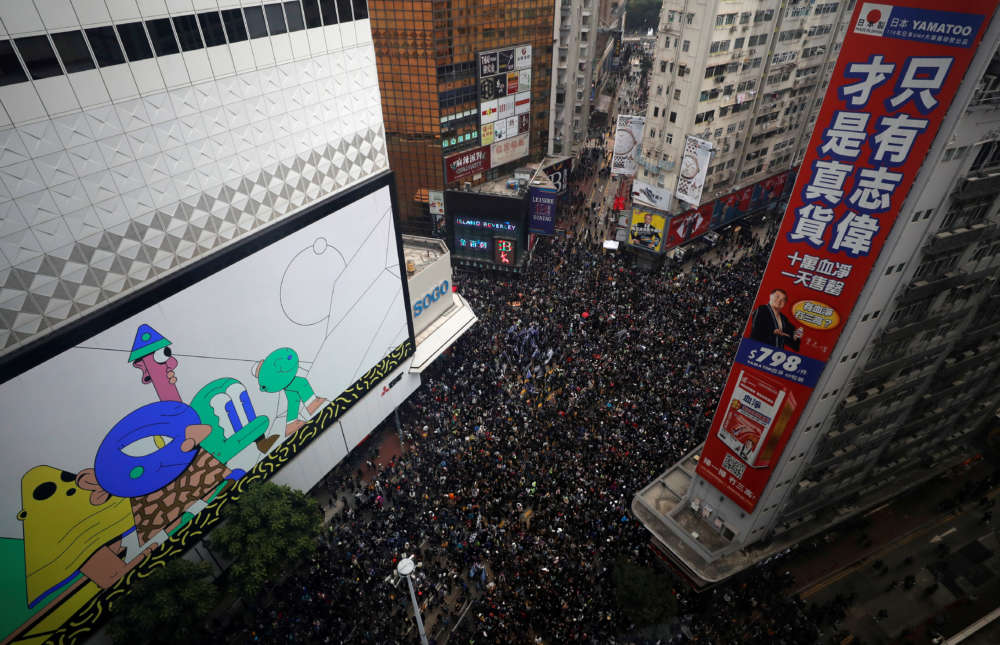 Tens of thousands of anti-government protesters began marching in Hong Kong on New Year’s Day, demanding concessions from the city’s embattled government as the civil unrest that convulsed the Chinese-ruled city for over half a year spills into 2020.

Gathering on a grass lawn in Victoria Park under grey skies, citizens young and old, many dressed in black and some masked, carried signs such as “Freedom is not free” before setting off.

“It’s hard to utter ‘Happy New Year’ because Hong Kong people are not happy,” said a man named Tung, who was walking with his two-year-old son, mother and niece.

“Unless the five demands are achieved, and police are held accountable for their brutality, then we can’t have a real happy new year,” he added, referring to the push for concessions from the government including full democracy, an amnesty for the over 6,500 people arrested so far, and a powerful, independent investigation into police actions.

The pro-democracy march is being organised by the Civil Human Rights Front, a group that arranged a number of marches last year that drew millions.

Along the route, a number of newly elected pro-democracy district politicians mingled with the crowds on their first day in office, some helping collect donations to assist the movement.

“The government has already started the oppression before the New Year began … whoever is being oppressed, we will stand with them,” said Jimmy Sham, one of the leaders of the Civil Human Rights Front.

Thousands of Hong Kong revellers had earlier welcomed in 2020 on neon-lit promenades along the iconic skyline of Victoria Harbour, chanting the movement’s signature eight-word Chinese protest couplet — “Liberate Hong Kong. Revolution of our Time.” — for the final eight seconds before clocks struck midnight.

A sea of protesters then surged down Nathan Road, a major boulevard, blocking all lanes in a spontaneous march breaking out within minutes of the new decade. Some held signs reading “Let’s keep fighting together in 2020.”

China’s President Xi Jinping said in a New Year’s speech that Beijing will “resolutely safeguard the prosperity and stability” of Hong Kong under the so-called “one country, two systems” framework.

A group of 40 parliamentarians and dignitaries from 18 countries had written an open letter to Hong Kong’s leader Carrie Lam on New Year’s Eve, urging her to “seek genuine ways forward out of this crisis by addressing the grievances of Hong Kong people.”